How Modern Mormons Read the Book of Mormon 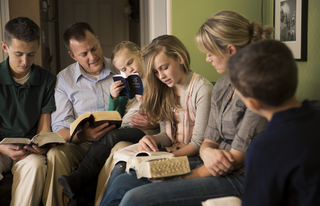 Having been a Mormon for all my life, I can say with a fair amount of confidence that this is more or less the way that most Mormons read the Book of Mormon:

Nephi has obnoxious, cartoonishly evil brothers who try to kill him all the time but God loves him more than Jesus and they always fail. They are both wicked and losers. Nephi’s only flaws are telling it like it is and being perfectly obedie–wait, those aren’t flaws, Nephi is a god whom the Holy Ghost constantly worries will replace him. God finally curses the brothers and their posterity with black skin (apparently these 6th century BC Middle Easterners were all white) but this isn’t a problem because as soon as they become righteous, they’ll get their white skin back.

Then Isaiah says a ton of stuff that’s an incoherent mess. We’ll usually skip this while confidently agreeing it’s the most important part of the Book of Mormon.

Then Ammon goes shock and awe on some sheep thieves. Limb mutilation now morally acceptable and way cool. No one steals another sheep ever again.

Then God punishes a wicked people and saves Alma and Amulek by burning women and children to death. That’ll show ’em. God’s will be done. Never mess with a prophet of God.

Big long war, proving that war is probably always the right answer. War is unfortunate, but also the best. All Nephite soldiers are the equivalent of Navy Seals and all generals have the military mind of Patton. They kick serious Lamanite ass all up and down southern Mexico/northern Guatemala.

Ignore the part where Jesus sends natural disasters to kill most of the population. Open on Jesus arriving to explain to all the Nephites how they’re still chosen but they could probably up their righteousness game. Passive aggressively point to injunction to not be contentious.

Nephites finally get the righteousness formula right and have peace for two centuries.

However, everyone dies in the end trying to keep all the commandments so they can get rich because they fail to avoid the pride cycle.

Lesson: Obey the commandments to get rich, just tone down the pride a little and you’ll stay rich.