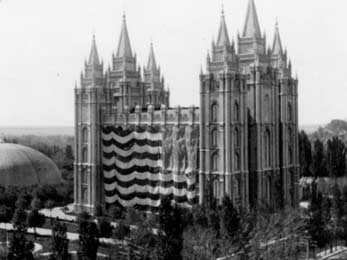 In 2008, Pew Research released a comprehensive report on religious demographics in the United States. Not surprisingly, when it came to questions about politics, a significant majority of Latter-day Saints identified as Republican or Leaning Republican.(1) In 2010, Gallup found that Mormons were the most conservative religious group in the nation.(2) These figures appear rather inconsequential. Conservatism is, quite frankly, inextricably linked to the Mormon image. But I think there is more to be examined here. The history of the Latter-day Saints can shed light on modern political tendencies. First, I would like to examine how early Mormon economic beliefs seem to contrast with their political conservatism today. Second, I will explain why I don’t think the modern acceptance of Republican values necessarily coincides with a desire to be part of the mainstream.

The Republican Party emerged in the 1850s as the slavery crisis was set to boil over into four long years of war. Joseph Smith was killed in 1844. Thus, admittedly, any comparison between modern conservative values and pre-1850s Mormonism is going to be somewhat distorted due to the different political alignments.

Nonetheless, we can still reconstruct Smith’s values and goals for his community. Politically, Smith was lukewarm towards both Whigs and Democrats,(3) preferring not to become indebted to any one party. This is not surprising as Smith’s immediate concerns were for the wellbeing his community rather than national issues. In the eyes of mainstream society, Smith was the leader of another alternative movement. He was effectively creating his own religio-political system not completely in tune with either of the major parties. In Nauvoo, he was ready to give it a name: theodemocracy.

But let’s step back a few years. Smith’s movement, of course, arose in a time of rapid change as America was cultivating its identity. In the political realm, Andrew Jackson was the first populist president. Economically, the agrarian idyll of Jefferson was giving way to industry. Religiously, the fervor of the Second Great Awakening was enveloping the country. In this socially revolutionary era, a large contingent of Americans felt alienated from the seemingly new world. They may have been religiously isolated, financially hurting, etc. To fill this silent void, communities and communes sought to recapture a sense of belonging and/or a je ne sais quoi which they felt had been lost in the tumult. Enter Joseph Smith.

To maintain brevity and relevance to today, I will focus on economic matters. Smith, probably influenced by his situation growing up as well as Sidney Rigdon, revealed an economic system designed to reduce stratification and institute harmony. Describing the revelation, Marvin S. Hill wrote:

“The bishop was to determine in consultation with each member how much property should be leased to each member. The residue of property went into a common storehouse to care for the poor or finance church business, including the needs of church officials. The embarrassment of having a “hireling clergy” was thus avoided. As historian Leonard J. Arrington notes, this law curbed unequal accumulation among the Saints, yet allowed room for individual initiative and responsibility. The Law of Consecration then was not so much opposed to individual enterprise as it was to social cleavages which accompany the unequal distribution of wealth. Social cohesiveness was the intent of the law, but securing the Saints’ complete cooperation was difficult.”(4)

In short, this was a centralized, redistributive program designed to make sure each family of saints had enough to be comfortable. The United Firm augmented this plan by attempting to make the Latter-day Saints economically independent of “Gentiles.” But they failed. Even claims to revelation was not enough to convince the many saints still connected to America’s individualistic ethos. Regardless of its failure, this grand economic program is representative of what was the ultimate objective of the Mormon community. While Smith never again tried something this comprehensive, he retained his sense of the importance of community and transcending self-interest for the good of the church. The lost cause of the Law of Consecration became enshrined in the Book of Moses.

So how is this applicable to today? The conservative Republican values to which most Latter-day Saints subscribe stand in stark contrast to the communal efforts of Joseph Smith in the early days of the church. American conservatism proposes to be the party of the individual; Smith, while not against the individual as Hill pointed out above, appears to have placed a greater value on the community and was wary of an economic hierarchy. On the flipside, however, Latter-day Saints are known to be tightly bound as a religious community. Unlike in the early church, today economic values are, for the most part, separate from religious unity.(5) 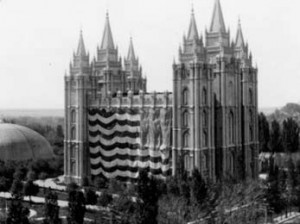 Utah Statehood (1896)-Was this the start of a political transition?

The 1856 Republican platform declared polygamy one of the “twin relics of barbarism.” For the rest of the century, Republicans spoke out vigorously against the polygamy-practicing theocrats of the Great Basin. Yet, today, Latter-day Saints ardently defend what was once their bitter enemy. Given this past, why are Mormons so enamored with Republicanism today?

For one, the elimination of polygamy after the Second Manifesto ended the Republicans’ two major moral campaigns of the past half century. As the utopian social and economic dreams of the church became vestiges of a prior era, the Mormons found it more advantageous to assimilate to Republicanism. Except for the election of 1916, Mormons consistently supported the Republican candidate through the Progressive Era and the 1920s. In an era dominated by Republican leadership, one may conclude, at least partially, that Mormons were settling into the mainstream. As the century progressed, Latter-day Saints became more captivated with other tenets, including the morally conservative principles of the religious right. President Ezra Taft Benson’s extreme conservatism in the latter part of the 20th century helped solidify their attachment to the Republican Party.

But aside from these standard arguments for Mormon conservatism having its roots in adjusting to the mainstream, I think there are other reasons. As a tight-knit, largely geographically linked community, Latter-day Saints have not forgotten their former aversion to government involvement. Today, Republicanism acts as a vehicle for venting disapproval of big government. It’s the party that advertises itself as resisting government influence. This resonates strongly, I propose, with the vivid historical consciousness of most modern Mormons. Hence, for example, Cliven Bundy is able to give himself both a contemporary ideological, as well as historical, justification for his actions.

Side Note: Mormons and Marriage

Marriage has long been a controversial component of Mormon theology and secular attitudes. I take it as a given the majority of Latter-day Saints’ opposition to non-traditional marriage stems from religious beliefs and church leaders. Add to that their latching onto the Christian moralism of the mid-late 20th century and one can see why Mormons often react so negatively.

The past year has added to the fray, starting with Federal Judge Clark Waddoups’ striking down parts of Utah’s ban on plural marriage. The adverse responses to gay marriage and now polygamy provoke interesting questions for modern Latter-day Saints.

Robert Flanders and Hill both noted the difficulties of early Mormonism in a pluralistic society. America, many thought at the time, was truly embracing a democratic, free spirit, open to any and all. Unfortunately, Flanders writes:

“The literalism of the Mormon doctrine of the Kingdom of God on Earth was dangerous in America. Fundamentally the Mormons denied the legitimacy of a pluralistic society — the Kingdom was to fill the whole earth. Although Mormonism was a product of a pluralistic society where religious freedom was possible, it seemed to threaten such a society and so the society denied the Mormons the right to participate in it.”(7)

This problem with pluralism recurred during the polygamy trials of the latter part of the century. Religious practice was found to be tolerable so long as those in control didn’t find it too odious to predominant cultural mores.

At one point, then, Mormons stood at the forefront of crying for total freedom of religious, and social, action. Regardless of any inherent paradox with pluralism, the Latter-day Saints, for all intents and purposes, were pleading for pluralistic toleration (at least until the kingdom could reach fruition). Today, Latter-day Saints once again are at the forefront of the religious freedom debate. Is there a contradiction between the Saints’ polygamous past and current aversion to non-traditional marriage, or is this reconcilable? Should the Church be open to Judge Waddoups’ decision? There are no easy answers to either of these questions, especially given the Saints’ tumultuous religious, social, and political history.

Latter-day Saints have moved away from the utopian aspirations that characterized their birth as a community. Nonetheless, while the goals of the past seem lost, they are not forgotten. Although they no longer actively seek the same radical economic lifestyle, Mormons still live as a close religious group, ever conscious of their heritage. Part of that heritage is repeated attempts at realizing a vision of society that was constantly knocked down by the powers that were. Such recollections help fuel the Latter-day Saints’ commitment to conservative reactions to large government.

1-http://religions.pewforum.org/portraits
2-http://www.gallup.com/poll/125021/mormons-conservative-major-religious-group.aspx
3-In practice, however, after the 1841 elections, Smith tended to publicly align with the Democrats, largely due to his contact with Stephen Douglas.
4-http://signaturebookslibrary.org/?p=5333
5-Admittedly, tithing may be considered a modern incarnation of the Latter-day Saints’ economic past. Nevertheless, it is far less extreme than past attempts at achieving socioeconomic unity.
6-https://www.dialoguejournal.com/wp-content/uploads/sbi/articles/Dialogue_V05N01_28.pdf

This article has been edited from its original form.

Jeff Cimmino is a high school senior from New England who loves to study the history of the United States, Latter-day Saints, and communal societies. He hopes to earn a PhD in History as well as major in anthropology. He enjoys reading in a diverse array of subjects, from the American Revolution to radical theology. He converted to the LDS church in 2009, but now considers himself a student of all religious traditions. He also periodically blogs at Saints Herald.

All posts by Jeffrey Cimmino