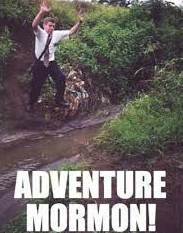 I had a conversation yesterday with a friend of mine who was a recently returned missionary. It was a lot of fun to reminisce about our experience serving as a missionary. We told crazy stories about mission rumors and urban legends, missionaries finding creative ways to bend mission rules, stories of being sick, etc.  At the end of our conversation, I concluded that we need to get some team of anthropologists to do an in-depth ethnography about the LDS mission experience. Seriously, my mission was a wonderful experience, but it was also totally and completely weird. I don’t necessarily blame the Dominican people, or the country, or the church for this. I just think the experience itself, the sending of young people from all over to proselyte, will inevitably be an unusual one. I forget sometimes how strange it is to the rest of the world that we, as a church, send tens of thousands of over eager 20-somethings off to foreign lands to wander around in dress clothes and name tags. If I were to review my life, some of the strangest experiences (good and bad) of my life happened on my mission. I could write a hundred posts about how odd missions actually are and can be.

But instead, I want to hear from all of you readers. I have learned as a web denizen that there are tons of wonderfully ridiculous stories out there that are not often shared. Because many of my stories involve diarrhea or vomiting, I don’t really get to share them, either.March, at least in the world of college basketball, is a month of fierce competition. In the spirit of the month,  I have decided to put on an internet-wide contest. To all who have ever served missions: In narrative form, share your craziest, most absurd, most ridiculous mission story in the comment section.  Lessons gone awry, crazy investigators… I want to hear it all. You can be as brief or as verbose as you would like. A panel of judges will review the stories. They will be evaluated based on 1.) how crazy they are, 2.) how awesome they are, and 3.) how hilarious they are. The winner of the Missionary March Madness challenge will receive a super awesome digital drawing of your story, done by an  artist who will be revealed at a later date.

I can’t wait to read your awesome stories.

Note: I will include my story in the comment section as well. It will not be included in the contest