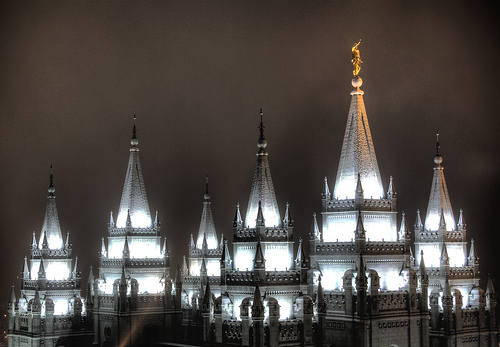 Below is an old journal entry from a year ago. It has sat as an incomplete draft on my personal blog for months because I’ve been too scared to post it. However, in conjunction with my recently published interview with Devery Anderson on the development of LDS Temple Worship at Exploring Sainthood, it finally feels right to share one of the most significant and important experiences I’ve had while worshipping in the Temple. Thanks to the Barkers for allowing me to post this here. I hope you’ll pardon the specificity of my descriptions of the Endowment — please know that I do hold that ceremony sacred, especially the parts I’ve covenanted not to reveal. I hope you’ll share your thoughts and feedback in the comments. And of course, please enjoy the newest episode on the Temple at Exploring Sainthood.

There I sit dressed in white, engulfed in a darkness interrupted by the shallow glow of the sacred projection at the front of this odd cinema. I’ve seen this film dozens of times, always in these rooms adorned with pleasant pastels, an array of soft cream-colored chairs, and a polite assembly of devoted patrons. The sound of Lex De Azevedo’s sweeping symphonic score grandly plays whilst the progression of majestic images of swirling nebulas, sparkling galaxies, craggy volcanic coasts, and exotic flora and fauna dance in harmony with the comforting boom of the male voices of deity. Though the occasional snore interrupts the grandeur of the scene, the opening sequence of this divinely mandated production imbues within me a sense of awe and wonder as the marvel of creation is presented to my senses.

As someone with a critical eye for dated and campy filmmaking, the Endowment has always been a struggle for me to sit through. And I’d be lying if I denied that some of those rude snores sometimes came from the back of my own throat. Regardless of that, I’ve always risen to the challenge of decoding this mysterious teleplay, dissecting the symbols, and searching for the hidden meanings.

In this particular session, many things were different for me. It had been several months since I had last attended the temple, and was probably one of the first times I had sat through an Endowment Session since my faith transition. At the time, it was difficult to reconcile my commitment to Mormonism and my dissatisfaction with my religious experience in the Church. I found so many aspects of Mormonism empowering and fulfilling, but this did not mesh with the messages I heard in Church, which seemed focused on formulaic orthopraxy and fear-based incentives for obedience to Church leaders. 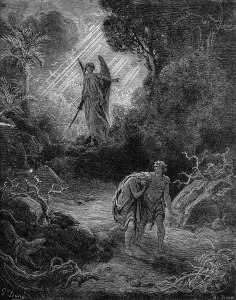 As I sat there in the dark pondering my dilemma, I watched a dull-yet-handsome, square-jawed Adam with a doe-eyed Eve clutched at his side wearing her stylish pelt tunic. As they traversed the mountain brush of the lone and dreary world, I couldn’t help but sympathize as I lamented my own epistemic distance from God. Suddenly they are intercepted by Lucifer, dripping with confidence, and adorned in a strange medieval costume. Satan presents himself as the god of this world and implies that he can grant the couple according to their desires.

With a cold stare, Adam declares that he is “looking for messengers.” Grinning smugly, Lucifer assures Adam that many will come willing to give them religion — the philosophies of men mingled with scripture. “But I am looking for messengers from my father,” Adam replies rigidly, and escorts his bride past the Serpent. Something about this exchange resonated with me, but I didn’t yet know why.

In the next scene Peter, James and John arrive and find Adam and Eve’s company being taught religion, as Lucifer explains. Though Adam seems to patiently observe and tolerate religion being preached, when asked by the Apostleship what he thinks Adam again asserts, “I am looking for messengers from my Father to teach me.” Pleased, Peter, James and John depart, only to return a few minutes later and present themselves to Adam as “true messengers” from God. Upon Adam’s request, Peter provides Adam proof, or rather a manifestation of their celestial ambassadorship (symbolized here by a Masonic hand clasp).

Then it clicked. Suddenly the voices faded into echoes, and I felt transported as the epiphany descended. “There will be many willing to preach to you the philosophies of men, mingled with scripture,” the words repeated, followed by “I am looking for messengers from my Father.” Slowly the realization came upon me. “I am Adam,” I almost said aloud. I’m here on this world, separated from God, searching for truth. Like Adam, I wanted messengers, but too often felt like all I received from church was religion.

As the ceremony continued, I obsessed over this idea. I am Adam . . . where are the messengers . . . and how will I know them? I sat there in the dark, wondering about the proof — the tokens — provided by an alleged messenger/prophet of God. Surely it would be more than a simple handshake, I reflected. For some reason my thoughts turned to Joseph Smith. I have a very complicated relationship with Brother Joseph. Like Terryl Givens promotes, I view Joseph as the embodiment of the Lord’s promise that he will use the “weak things of the world” to bring to pass his work among his children. But despite his numerous fundamental flaws, I realized that I could accept Joseph Smith as a “true messenger.” To me, I find tremendous transcendent beauty, truth, and hope rising from the messy origins of Mormonism. I can’t dismiss it, or explain it away. There is something about the theology Joseph revealed and his expansive, universalist approach to communion with God that I can accept as valid “signs and tokens” of a messenger of God.

Suddenly the polite tapping of rubber on metal snapped me out of my trance. I realized tears had been streaming down my cheeks. As I embraced a stranger on the other side of the white sheet to prove my own willingness to enter the presence of God, some of these thoughts still lingered. But what about the rest of it? Who are the messengers today? And what tokens will they show to the world? I entered the Celestial Room, and took in the bright, white metaphor. Plush sofas cradled adoring husbands and wives, and prismatic light gushed from the chandelier like a font of truth and love. Though these questions hung over me, I suddenly felt at peace. I realized that Joseph was enough for now. At least he was for me.

Micah Nickolaisen is a photographer and active, faithful Latter-Day Saint living in Chandler, Arizona. You can read more of his thoughts and story at FaithfulHeretic.com. Micah also manages and hosts the new LDS podcast Exploring Sainthood.

All posts by Micah