Malcom Gladwell, Elder Holland and the Legitimacy of Authority 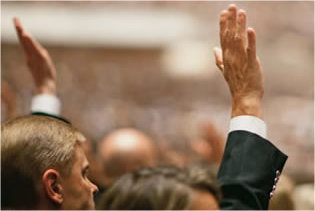 I had the unique opportunity of hearing Malcolm Gladwell speak in person a few weeks ago. I expected him to speak about outliers or perhaps tipping points, but instead he chose a topic that surprised me: rebellion.

It’s called deterrence theory, and it’s been used to influence such trivial things as, oh, our criminal justice system. Gladwell cited California’s infamous “3 strikes” rule as an example of how deterrence theory has influenced public policy. Lawmakers though by making the cost of committing crime greater and greater with every offense, it would create a natural deterrent for repeat offenders.

But does deterrence theory really explain why people rebel? Gladwell doesn’t think so. He rattled off a handful of examples – many from the Civil Rights era – of people or groups who rebelled even when the cost of doing so was painfully high.

So why do people rebel?

For Gladwell, the answer is simple. People rebel when they lose trust in authority. Better put, when authority loses its legitimacy.

If you stand in a position of authority and you lose one of those, you’re on shaky ground. Lose two, and you’re asking for trouble.

Lose all three? You’re staring in the face of rebellion.

Which brings us to some emotional remarks by Jeffrey Holland from a stake fireside in Arizona from a few days ago. Like you, I’m well-versed in Holland’s fiery delivery style and his ability to emote in order to emphasize a point.

But even for Holland, these comments were pointed:

“Don’t you dare bail. I am so furious with people who leave this church. I don’t know whether ‘furious’ is a good apostolic word. But I am. What on earth kind of conviction is that? What kind of patty-cake, taffy-pull experience is that? As if none of this ever mattered, as if nothing in our contemporary life mattered, as if this is all just supposed to be “just exactly the way I want it and answer every one of my questions and pursue this and occupy that and defy this – and then maybe I’ll be a Latter-Day Saint”?! Well, there’s too much Irish in me for that.”

I was struck by that quote. Struck because of the bellicose nature of it, which seems unusual for Holland (well, kind of unusual), but also because it immediately and strikingly brought to mind Malcolm Gladwell’s talk from a few weeks ago.

See, I get the impression, not just from Holland’s remarks there, but from a lot of talks and remarks by the brethren lately, that they think people are leaving the church (a.k.a., rebelling) because the cost just becomes too great. They can’t handle all the questions. They can’t deal with the struggle. Their testimonies aren’t strong enough.

The brethren buy into deterrence theory. Or at least that’s the message they send from the pulpit.

But I’m not convinced that’s really what’s going on at all.

And for the leader of a church that hangs its hat on authority, that must be a tough pill to swallow.