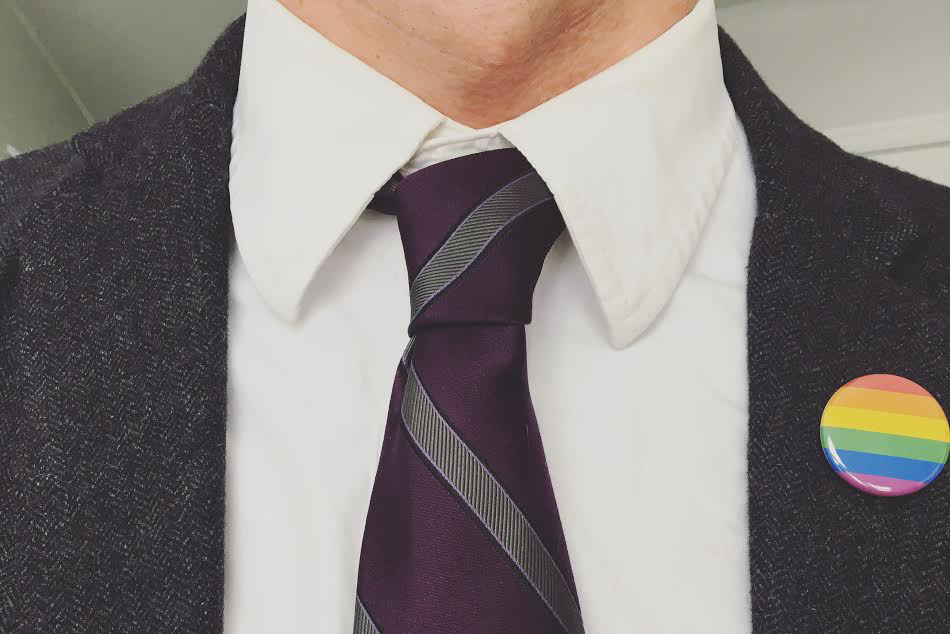 It was early Sunday morning when Drew gently called from the bathroom, “Good morning, beautiful. It’s time to get up. We can’t be late for church.” He was already awake, showered, and dressed before I even opened my eyes.

Still lying in bed, I opened my eyes and replied, “Or you could come back to bed and we could have our own spiritual experience.”

He paused ever so briefly, weighing his options before abruptly blurting out, “With God as my witness, we are going to be on time to church! Get your beautiful ass out of bed and get dressed.”

We exchanged smiles as I begrudgingly got out of bed. Drew walked over to the closet and pulled out a necktie, “I think I’ll wear my purple tie with my rainbow button to church today. That way I can support the ordination of women and the LGBTQ+ community.”

Sometimes I have to pinch myself after he says things like that. If you would have told me ten years ago my husband would be supporting the ordination of women and the queer community, I wouldn’t have believed you. Not my husband.

As I watched him pin his button onto his jacket, my mind recalled an unpleasant memory.

It was 2008. Prop 8 was all over the news. Drew and I had been arguing for years about homosexuality, we didn’t need to be reminded of our blatant disagreement every time the news came on, but there it was. Again.

Drew commented while staring at the screen, “They want to get married now. Soon they’ll want to be teaching it in schools.”

I routinely said, “There’s nothing wrong with being gay.”

He countered, “Did you read Elder Oaks’ conference talk on homosexuality I sent you?”

He continued, “Blaire, the prophet has spoken about this. You need to get a testimony for yourself. Being gay is wrong.”

I replied, “The prophet is wrong. They aren’t much different from me.”

Drew scoffed, “You’re nothing like them. You may be attracted to women, but you’re not one of them.”

I interjected, “I’m everything like them! How can you separate them from me? How can you accept me and not them?”

He responded, “Jeez, why are you so upset? You’re overreacting.”

I couldn’t continue. We had fought too many fights. I couldn’t handle another, “Drew, I don’t want to fight anymore. I have read all the books and conference talks you have asked me to read. We’ve said all that can be said, and neither one of us has changed.”

He continued, “But Blaire—”

I cut him off, “Drop it! I can’t even look at your face!” I exhaled, trying to regain my composure. I continued softly and brokenly, “I really don’t want to fight anymore. I hurts too much.”

Seeing my frustration, he gently put his hand on my shoulder and said, “Okay. I’ll drop it.”

Not another word was spoken. We both knew our marriage wouldn’t survive it.

Years went by with little conversation about homosexuality. It came up here and there. We casually discussed it from time to time, but we stopped aggressively trying to convert each other. Forcibly trying to change the other person only led to more heartache. Instead, we focused on loving each other.

Somewhere along the way, something changed. I don’t know exactly why or how it happened. You’d have to ask Drew for the details, which I’m sure are many. But slowly over the years, something gradually changed.

More time passed. It was an average day of housework until my phone rang. I picked up, “Hey, honey. How’s work going? I was just thinking about you.”

He continued, “Yes, but YOU are bisexual.”

I laughed. It was as if every conversation we had over the last decade merged into a single moment of clarity for him. I didn’t know how to respond. I had been bisexual our entire marriage, but hearing him accept the label somehow made it real.

Smiling, I said the only thing I could say, “I know I’m bisexual. What took you so long?”

Drew answered with such sincerity, “I couldn’t . . . I didn’t . . . I’m sorry. You’re a beautiful, wonderful, bisexual woman, and there’s nothing wrong with you. I love you.”

I smiled and replied, “I’ve waited a long time to hear you say that.”

He continued with remorse in his tone, “Why did you stay married to me? All the things I’ve said to you. After all these years, why?”

I paused, holding back the tears, “Loving you seemed more important than agreeing with you.”

The memories faded as I stood next to Drew watching him put on his purple tie for church. I didn’t need to pinch myself. The moment was real. I commented, “ It’s still weird to hear you say things like that.”

I continued, “Your support for the queer community. I didn’t think I would ever hear these things from you, but here you are with your purple tie and rainbow button.”

He smiled, “Thanks for waiting for me.”