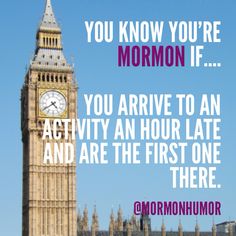 We’ve all heard the old American proverb, “The early bird gets the worm.”

Well, if given the choice between being the early bird and the worm, I’d be the worm. And I think scripturally speaking; the worm has the upper edge on spirituality.

It doesn’t matter how hard I try, I can never make it to Sacrament meeting on time. It’s not that I’m a “party animal;” it’s just that I am convinced my internal clock is set up differently. Some nights I cannot sleep, and it is nothing to find me up at 2:00am, or even later, reading, studying, writing or watching some crazy preacher on late night TV. I am not, nor will I ever be, a morning person, unless you’re talking about 3am! I’ve tried over the years to change, but it just isn’t happening. Now that I am a grad student again, it seems I will continue to operate on “scholar time.”

But wait! There is hope for those of us who operate on Mormon Standard Time (MST), and Jesus himself often seemed more concerned with the “burning the midnight oil” than with getting up with the roosters. Jesus liked to stay up all night praying; consider his appearance to the disciples on the Sea of Galilee during the “fourth watch” of the night after spending half the night in prayer (Matthew 14:25). Following the Atonement in the Garden of Gethsemane, Jesus chides the disciples for not staying up late and praying alongside him. Even the “foolish virgins” are shut out because they do not keep enough oil in their lamps late into the night.

Evenings in biblical times were set up in increments of four major time periods called “watches.” Basically, the clock was flipped upside down from our own; this is why in the Jewish calendar, Shabbat, or the Sabbath begins at sundown on Friday night (our time). The day “watches” are also set up in similar increments. The “night watches” are set up as follows:

I find it encouraging that so many spiritual revelations and insights are imparted during the nighttime. Consider Nicodemus approaching Jesus by night learning the mysteries of the “new birth” long after everyone had retired to their quarters following a long day of Passover festivities. The Resurrection itself occurs during the Fourth Watch, testifying of a God who does not “sleep nor slumber”  (Psalm 121:4).

So often we feel God is not answering our prayers, but time after time we find our Heavenly Parents come through for us last minute- and in ways we never expected! Over the past year, especially I had been praying for some answers in my own life and followed a very clear prompting I had been given. However, when it came time for the answer to be revealed; that answer was “no.”

Upset and confused, I called for my Home Teacher and he came over with the missionaries to give me a blessing.  He asked if I had ever read the passage where Jesus appeared to the disciples during the “Fourth Watch,” explaining that so often answers to prayer come in the late hour. Sure enough, two months later my prayers were answered in a way I had never even expected!  Like the disciples, I felt abandoned and afraid in that moment of vulnerability, but Jesus knew my heart and met me during the Fourth Watch. I’m just glad this time around I trusted and waited!

Sometimes it pays to be a night owl, or even a spiritual worm. After all in his moment of despair, even King David cried out, “But I am a worm, and no man….” (Psalm 22:6- emphasis mine, as I am convinced this verse has feminist implications!).

Who says the early bird gets the worm? That said, I have made it a point to make it to Sacrament meeting on time more often.