Why I Liked What Elders Oaks and Christofferson Said 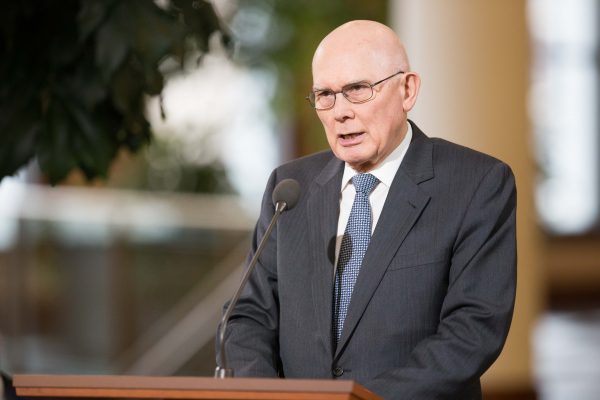 A few weeks ago, in my continuing efforts to educate myself on LGBT issues, I started watching The L Word, a show that focuses primarily on the day-to-day lives of a Los Angeles-based community of lesbians. At first, I was taken aback because the glamorous lesbians depicted on the show weren’t anything like the lesbians I am lucky enough to know in my own social circles, but, in doing some research, I came across this quote from Leisha Hailey, an actress in the series who is also a lesbian: “It was just amazing to finally see yourself represented…I’m excited to be a part of it.”

In the days since the news conference on Religious Freedom and Nondiscrimination, I’ve read and heard a lot of reactions. Many people I know are upset about what was said. I avoided listening to or reading the contents of the conference because I didn’t have the emotional bandwidth to deal with a range of emotions.
But, as I listened today, I had a growing feeling of peace and joy at the words I was hearing. For the very first time—and to me, most importantly—the terms LGBT and gay were used in place of the usual: same sex attraction (or worse—people suffering from same sex attraction). I was delighted to hear those terms coming from the mouths of people I believe and hope to be prophets of God and apostles of Jesus Christ. What a huge and promising shift in our cultural rhetoric! What a kindness to our beloved LGBT brothers and sisters who have had to bear the microagression that is being mislabeled!

I am so encouraged to hear the call for support towards anti-discrimination legislation, as well as a call for respect of religious beliefs. I am motivated by the call for compromise and respect for all sides of the issues at hand. I was moved to tears to hear Elder Oaks say in a subsequent interview, “We have nothing but feelings of love and compassion for LGBT persons.”

As someone who swims in the waters of progressive Mormonism, this looks like a baby step. For the thousands of my brothers and sisters who swim with me, the news conference was disappointing. But, from the perspective of the millions of traditionally-believing and orthodox LDS, this conference represents a huge paradigm shift in our treatment of LGBT people and the advocacy for basic human rights. Many Mormons have long felt justified in discriminatory practices and aggressive behavior towards the LGBT community and this conference was a call to end all such conduct.

I am grateful for the words of Elder Oaks who defended those who are motivated to action by religious faith and conscience, as I know and believe my own actions surrounding LGBT activism and allyship to be fully based in and prompted by my religious convictions to love all of God’s children and to be the literal hands and heart of God on earth to bind up hearts and lift spirits.

I saw an air of compromise and kindness. I saw a deep love for the faithfulness of the saints and their willingness to stand true to their beliefs, as well as an emerging understanding and protection of basic LGBT issues. I witnessed the result of what has to have been weeks and months and maybe even years of passionate discussion between men who want the best for the saints whom they love so dearly and the teachings of the Savior, whom they also love dearly. I saw the answer to the prayers of so many of us who have wanted to see some modicum of progress in the rhetoric surrounding LGBT issues in the church we love so much.

It was just amazing to see myself represented. I’m excited to be a part of it.