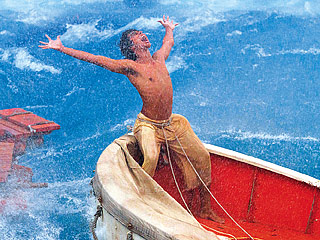 I wrote this at 5:oo this morning, Saturday, June 21. I’ve read the following scripture and reflected on it many times the past few days.  The other night, I shared it with a dear friend:

“The storm came on slowly one afternoon.  The clouds looked as if they were stumbling along before the wind, frightened…Oh, you should have seen the landscape!  What I had seen up till now were mere hillocks of water.  These swells were truly mountains.  The valleys we found ourselves in were so deep they were gloomy…The raft was getting exceptionally rough treatment, being pulled out of the water and dragged along bouncing every which way…

“Climbing the giant swells, the boat clung to the sea anchors like a mountain climber to a rope. We would rush up until we reached a snow-white crest in a burst of light and foam and a tipping forward of the lifeboat.  The view would be clear for miles around.  But the mountain would shift, and the ground beneath us would start sinking in a most stomach-sickening way.  In no time we would be sitting once again at the bottom of a dark valley, different from the last but the same, with thousands of tons of water hovering above us and with only our flimsy lightness to save us.  The land would move once more, the sea-anchor ropes would snap to tautness, and the roller coaster would start again…

“I hooked down the tarpaulin on both sides of the boat. The boat was lurching upwards steadily.  It was hard to keep my balance.  The lifeboat was now covered and the tarpaulin battened down, except at my end.  I squeezed in between the side bench and the tarpaulin and pulled the remaining tarpaulin over my head.  I did not have much space…But I was not so foolhardy, even in the face of death, as to move onto the floor of the boat.  There were four hooks left to catch.  I slipped a hand through the opening and worked the rope.  With each hook done, it was getting harder to get the next.  I managed two.  Two hooks left…The incline was over thirty degrees.  I could feel myself being pulled down towards the stern.  Twisting my hand frantically I succeeded in catching one more hook with the rope.  It was the best I could do.  This was not a  job meant to be done from the inside of the lifeboat but from the outside (emphasis mine).  I pulled hard on the rope, something made easier by the fact that holding on to it was preventing me form sliding down the length of the boat.  The boat swiftly passed a forty-five-degree incline…

“For the rest of that day and into the night, we went up and down, up and down,up and down, until terror became monotonous and was replaced by numbness and complete giving up…the tarpaulin beat me to a pulp, I was soaked and chilled, and I was bruised and cut by bones and turtle shells…

“Sometime during the night my mind noted that the storm was over…I glimpsed the night sky.  Starry and cloudless.”

“I noticed the loss of the raft at dawn…I turned and scrutinized every quarter of the horizon.  Nothing…That the sea anchors, miraculously, were not lost – they continued to tug at the lifeboat faithfully – was a consolation that had no effect.  The loss of the raft was perhaps not fatal to my body, but it felt fatal to my spirits.”  – The Lif Pi, chapter 83

When this storm is over, Mormonism will have lost many dear friends – friends that have been bruised and cut by our Church. Oh how these valleys have been gloomy.  How many of us will remain?

Choosing death by separating ourselves from our faith community.

Receiving blows that are fatal to our spirits.

Seeing Jesus after the storm, but He not being a consolation.

This boat is my death. This boat is my life.  It will protect me while it is killing me.  The boat and the waves come from the same place.  It would perhaps be easier to do the work from outside the boat. It would be easier to become a critic, but that just doesn’t seem to be where I should go.  Yet, I realize the boat is saving me, even while it is hurting me and you.  I choose to stay with you that choose to stay.  I choose to love those of you that leave the boat and do your work from the outside.