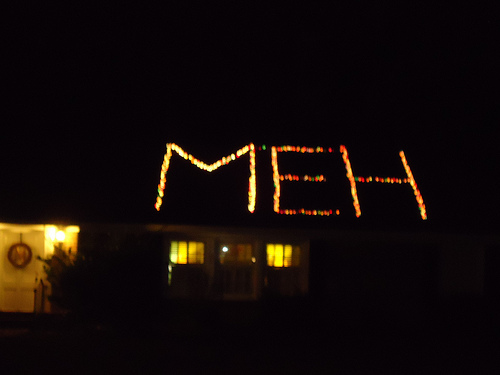 As a kid I’d play around the tree for hours. Impressions of ivory twinkle lights glinting off my mother’s extensive collection of antique colored glass ornaments–and of accidentally smashing several–are among the most potent of my childhood. The musty scent of popcorn garland, crinkly silver strands of tinsel icicles clinging to my pajamas every time I brushed past the tree, staying up late to watch stop motion Christmas specials, finding peppermint patties wrapped in red, silver, and green with spice drops and french vanilla candy canes in my stocking, and always bright bath pearls and bath salts and a set of apple jellies from my uncle.

The anonymous envelopes of cash dropped on our doorstep made it happen most years. A neighborhood friend, or a collection taken at church for divorced, chronically unemployed, physically broken mothers like mine. Some years the gifts were secondhand, and some they were sparse, but they always happened, along with big walnut-colored baskets full of frozen turkey and rolls and Sara Lee pumpkin pie, with little chocolate Santas and red and green jelly beans rattling around at the bottom under shredded paper filling. Even years when we had enough, someone from the ward often dropped by with a ham or a gift card just to make sure we were taken care of; to make sure we knew we were loved.

Right now, this year’s tree is rolled awkwardly into the corner until I feel like trimming the base and setting it in water. Cards are already accumulating on the fireplace mantle. I am warm. My kids will eat not just a nice Christmas dinner, but breakfast, lunch, and dinner every day for the foreseeable future, and we will enjoy Christmas knowing we are wanted and secure.

Somewhere nearby is a family who has none of those things. No one is going to come to their rescue. There are many, many families who live like this year round. And I have trouble seeing how I should enjoy Christmas while others suffer, when the whole point of Christmas is to honor someone who gave everything that the world might avoid suffering, and preached that others should do the same.

We love the fairy tales. The Christmas miracles. But the reality is that a lot of families don’t get the support mine did for Christmas, and even if they do, the day after Christmas rolls around, the festively wrapped box of canned goods and turkey roast runs out, and then what happens?

“But it is not given that one man should possess that which is above another; wherefore, the world lieth in sin.” (D&C 49:20)

For me, Christmas–especially Christmas as it has become in recent years, choked with excess and engorged with plastic trinkets stamped out on assembly lines where the workers may not even make enough to purchase the products they create–brings constant reminders of the stark difference between rich and poor, in our nation and especially around the world. Whatever I give will never be enough. I should enjoy an evening of downtown bustle with the lights on the trees and giant wreaths hung from second-story shop windows. But echoing through my mind, the constant quiet refrain becomes, “have-not, have-not, we’re all downtown buying earrings and scarves while so many people have-not.” They say there’s a war on Christmas, because some want to take Christ out of it. I see war every time someone attaches Christ’s name to this god-awful scramble for more things while so many people go hungry, under-clothed, under-educated.

So I don’t love Christmas. I’d love to skip right over it.

But I also know that a lack of fun on my part won’t actually solve anybody’s problems. If I know I can only do so much, what good comes of meeting all the festivities with a glare? Could I participate in a way that doesn’t contribute to the problem? To be fair, it’s not just the economic injustice that keeps me bah-humbugging. Stress, perfectionism, and some bad family mojo play their part in my yearly Grinchfest. But those good memories, vivid enough that I can almost feel the tips of my ears burn with cold as I hunch through a maze of trees lighted in gold and green and that weird icy blue the color of the menthol cough drops in my coat pocket, my little brother running ahead to look at the moving reindeer display…I do want them for my family. But I want them on terms that don’t conflict with celebrating the birth of a man who never mentioned a necessity for consumerism, but sure talked about taking care of the poor an awful lot. So this year, rather than grumping and stressing my way through the season, I am digging my heels in and doing what I can to make it happen in a way that doesn’t feel so much like this: 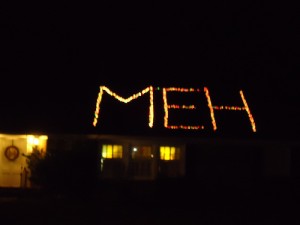 If  “meh” could solve poverty, then I’d be down with it. But it won’t, so I’m thinking there has to be a better way to integrate efforts to acknowledge suffering in the world and work to alleviate it while still allowing myself to be “merry and bright.” How can I seek justice and find balance during a season that so starkly highlights the differences between rich and poor?

Here is what I’ve tried so far:

1) Getting involved in charity hands-on. Our family usually donates at Christmas, but this year we’re also helping with a Christmas party my new kung fu school puts on every year for a homeless shelter. This allows the kids to feel more direct connection to the people they’re helping, and I’m getting to see first hand that we’re actually making people’s lives a bit better, though it isn’t even a drop in the bucket when it comes to solving bigger problems. Which brings me to…

2) Acknowledging I can’t fix all the problems. This is NOT an excuse for inaction, but it can help bring some peace of mind if you tend to get overwhelmed by big picture stuff like I do. I’m trying to give myself permission to be satisfied with whatever I can do, and just be happy with that for a while.

3) Sticking with simple, handmade gifts. No, not those fancy reindeer cookies on Etsy that were made by someone with way more baking experience than me (and they’re not showing you the pictures from all the times the reindeer eyes melted out of their heads before they got it right). We’re doing fleece pocket warmers filled with rice, little origami notebooks, bookmarks, home family photos, a book by my 7 year old called “The Dangerous Thing,” and recycled crayon shapes, plus a few small purchased gifts for the kids and probably shortbread or something. I’m including the kids in the work as much as possible and they’re loving it. I’m loving it, even though I have sore spots on my fingers from cutting out dozens of fleece hearts with dull scissors.

4) Ditching extra decorations. This year we’re passing on the fresh wreaths and pine swags, and the temptation of shiny new plastic baubles and bows, as well as excess/fancy Christmas wrapping. We’re replacing that with paper snowflakes and chains made with the kids, and letting the kids paint and draw on plain paper to wrap gifts in.

5) Pretty much, trying to replace any place where we’d normally spend money and get stressed out with more time together as a family instead.

Now, I’m still not this guy: 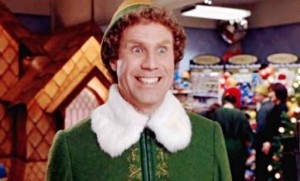 and I don’t plan to be. But I think I can safely venture that I am not miserable this year, and I’m okay with that morally. This does not change the much bigger problem of the many families who will be hungry and alone today, Christmas day, and weeks afterwards. But I’m maybe starting to learn a bit, not to love Christmas, but to make Christmas into something I can love.