The Legacy of Emma Smith 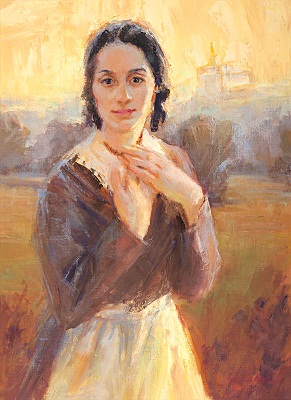 Over one hundred and thirty years have passed since the death of Emma Hale Smith in 1879. Her life and her legacy have at times been riddled with controversy, as well as accusations of apostasy. It seems that Emma had for many years largely been written out of official LDS history. Having been born and raised in the Church of Jesus Christ of Latter Day Saints, I was taught at a young age about the life of the Prophet Joseph Smith, as well as the story of how his wife Emma strayed from the Church after his death. I was taught that she had refused to follow Brigham Young and the saints out of Nauvoo on the trek west to Utah. To add to the tragedy of the story, as a result of Emma’s decisions, Emma and Joseph’s descendants grew up separated from The Church of Jesus Christ of Latter-day Saints, which Joseph Smith Jr. had restored. I heard stories about great personal, religious, and financial difficulty between Brigham Young and Emma, and that Brigham had once said that Joseph would have to “go to hell for her as sure as he ever gets her.”

Have you ever heard a story and have it so neatly packaged in your mind that you could retell almost all the details without any prompting only to later learn more details that turned your whole perception of that story to a slightly different angle?

In late summer of 1992, my husband and I were packing up our young family of 4 children to take a road trip from California to Utah. The August issue of the Ensign magazine was sitting on the table, I grabbed it for reading material on my way out the door. As we got settled into the long stretch of never-ending desert through Nevada, I flipped through the Ensign, and came across an article entitled “My Great-Great-Grandmother, Emma Hale Smith” by Gracia N. Jones.

As the story goes Gracia had converted to the Church knowing very little about Joseph or Emma Smith. She tells of going to Church after her conversion and looking at a picture hanging in the Relief Society room of Emma,

“On the nameplate I read the inscription: ‘Emma Hale Smith—Elect Lady—First President of the Relief Society.’ Fascinated to see at last a picture of my great-great-grandmother, I thought, how beautiful she is! Feelings of love for her filled me. But my thoughts were interrupted when someone behind me said, ‘My husband says they ought to take that woman’s picture off the wall of the church.’ Stunned by the tone as much as by the words, I was troubled and wondered what prompted this judgment of Emma.”

I was fascinated by the words of Emma’s great, great granddaughter, as this was very much the attitude I had experienced whenever Emma Smith was talked about in my youth. As I read through the article I began to see a side of Emma unfold that I had not previously had the opportunity to consider, and I wanted to know and learn more about this woman and her lived experiences.

Emma Hale’s first act of support for Joseph Smith was marrying him in spite of her father’s firm opposition. The seventeen years of marriage to Joseph were not all filled with happiness, there were countless difficult trials that she faced, somehow always finding her inner strength. In addition to moves, financial difficulties, threats of violence, persecution, and Joseph’s arrests, several of Emma and Joseph’s children died in infancy or as young children. Emma is believed to have held strong influence in the business affairs of the household. She took boarders into the home to provide additional income. She took on great responsibility, and she remained a woman of commitment even in times of difficulty and sorrow.

Nauvoo was a time of peace and prosperity for Emma but also a time of great trials. The Female Relief Society of Nauvoo was formed in 1842 , and Emma Hale Smith was made the first General President. There is considerable evidence within the minutes of the Nauvoo Relief Society meetings to suggest that Joseph Smith seemed to envision the Relief Society as an independent organization for women equal to the priesthood organization for men. In that first meeting, Emma told the women: “We are going to do something extraordinary”, and that they did. “The women themselves saw their organization as more than a charitable society. Spiritual gifts such as speaking in tongues and healing the sick were not only discussed in their meetings but the sisters openly practiced them. With Joseph’s approval, Emma and her counselors laid hands on the sick and blessed them that they might be healed.”1

“Life is like the river, sometimes it sweeps you gently along and sometimes the rapids come out of nowhere.” – Emma Smith

As her story unfolds, one of the hardest things Emma had to deal with in Nauvoo was polygamy; it was a practice that was extremely hard for Emma to live. She hated it. History tells us that she would go back and forth between struggling to gain a testimony of it and being strong, and then coming to the reality that she just could not do it. She said she was too jealous hearted. That, for most of us in this day and age is totally and completely understandable. Emma Smith would make tremendous sacrifices for the gospel of Jesus Christ, for her husband, and for the church. She was not perfect and made choices that may seem hard for us to understand today. There can be no question, though, that she made sacrifices far beyond what most of us would be asked to make in the name of our faith, and that she experienced more than her fair share of suffering.

“After these many years I can truly say; poor Emma, she could not stand polygamy but she was a good woman and I never wish to stand in her way of happiness and exaltation. I hope the Lord will be merciful to her, and I believe he will. It is an awful thought to contemplate misery of a human being. If the Lord will, my heart says let Emma come up and stand in her place. Perhaps she has done no worse than any of us would have done in her place. Let the Lord be the judge” (Mormon Enigma p. 309).

Although Emma’s life was filled with much persecution and sorrow, even bitterness on occasion, it appears that Emma endured her tribulations with great forbearance and maintained her faith in God. Writing to her son in 1869, she said, “I have seen many, yes very many, trying scenes in my life which I could not see … where any good could come of them.” She added this testimony: “But yet I feel a divine trust in God, that all things shall work for good.”

Understanding this woman, Emma Hale Smith is important for anyone who desires to have a more complete picture of the Mormon story.

“I have never seen a woman in my life, who would endure every species of fatigue and hardship, from month to month, and from year to year, with that unflinching courage, zeal, and patience, which she has ever done; for I know that which she has had to endure—she has been tossed upon the ocean of uncertainty—she has breasted the storms of persecution, and buffeted the rage of men and devils, which would have borne down almost any other woman.” —“Emma Hale Smith,” Ensign, Aug. 1992

For many people, the knowledge of Emma’s story ends when Joseph died. However, Emma lived nearly thirty-five more years! The second half of her life is a compelling, sometimes heart-breaking, sometimes heroic, and often extraordinary story.
Emma’s life was complex. Her refined childhood and girlhood was not designed to give her the skills she needed in adult woman, and yet she managed nearly everything thrown at her. She held on to her faith in God, in the gospel, and in Joseph Smith as a prophet throughout it all. She was not perfect, but what is incredible is that she was as great as she was given the powerful trials and persecutions she experienced. Her heartaches were real and would have been a challenge to any woman, particularly without the hindsight that time brings. They were enough to exhaust anyone and if, in the end, she was tired of fighting her way through life, I completely understand that.

In recent years it seems that an effort is being made to present Emma in a much less judgmental way through articles, books and even a motion picture produced by the Church called “Emma Smith; My Story” which was made primarily for her descendants, and seeks to illustrate a more positive legacy and perspective than some have attributed to her in the past. I think we have sometimes let our knowledge of Emma’s doubt cloud our memory of the devotion, faith and love that she displayed so beautifully. As I remember Emma Hale Smith today, the Elect Lady, and wife of Joseph Smith, my thoughts are full of love and of doubt, and the ways that they can live together in every broken human heart. Emma, much like most of us, loved and she also doubted. And perhaps this is as it should be. It is hopeful that we are learning to honor Emma and her legacy once again in a much more positive and beautiful way.

Jeralee was born and raised in Northern California, and now lives in beautiful Alpine Utah. She and her husband Lance, are the parents of four grown children, and grandparents to 5 amazing grandchildren, and are hopeful for more to come. Jeralee loves people, family, travel, laughter and her husband Lance. Her life motto is "I am far from what I once was, but not yet what I am going to be."

All posts by Jeralee Renshaw