Does the LDS Church Believe the Priesthood Ban was of Divine Origin or Not? 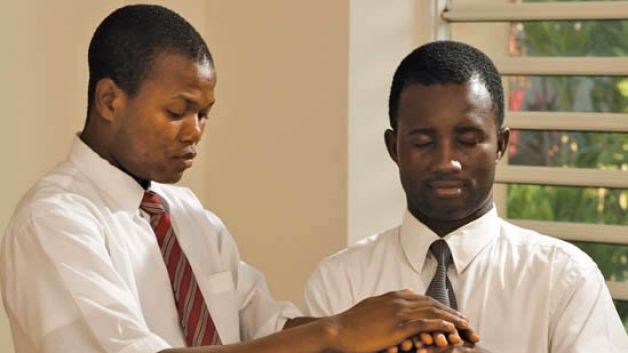 When the LDS Church’s Gospel Topics essay “Race and the Priesthood” was released in late 2013, large numbers of my fellow Mormons — particularly moderates and progressives — rejoiced that the Church had, among other things, finally distanced itself from its long-standing claim that the Church’s pre-1978 priesthood and temple ban was divinely inspired. They pointed to the fact that the essay inundates the reader with historical information and context that grounds the ban in 19th Century racial ideas, suggesting such ideas were its cause.

Other LDS Church members weren’t so sure. Some insisted that the Church wasn’t throwing divine authorship under the bus, per se, since the race essay doesn’t technically claim the ban WASN’T inspired.  (It repudiates earlier LDS leaders’ theological explanations for the ban, but that’s a different issue).  There’s no smoking gun, no unambiguous declarative sentence that definitively settles the question. Ergo, claims of divine origin have not been discarded, they argued.  They are still alive and well, very much a part of the Church’s truth claims.

Still others read the essay as intentionally ambiguous on the matter — the essay neither endorses divine origin nor repudiates it. It is strangely silent on this crucial question (just as the new introductory paragraph to OD-2 released earlier in 2013 was also silent). This was sometimes interpreted to signal a “We don’t know” response to the question of divine authorship.  That the Church was neither willing to embrace nor jettison the notion that God was behind the ban.

My own view is that while the essay was CLEARLY written by someone opposed to claims of divine origin, and structured accordingly, an undeniable (and regrettable) ambiguity really does remain. It’s like the essay takes you all the way up to the edge of the cliff of “no divine origin” but then declines to push you off. You have to decide to jump yourself … or not.  I’m a militant advocate of jumping, myself, but I wish the essay had violently thrown everybody off the cliff en masse so nobody had to.  🙂

Anyway, with all that as background ….

We now have a new and unexpected development in the ongoing saga of how to best understand the priesthood ban!

Take a look at the “Prophets and Revelation” chapter from the Church’s new “Doctrinal Mastery New Testament Teacher Manual”, the official resource LDS youth will be taught from this coming school year.  The chapter focuses, in part, on the nature of “God’s laws”, and it distinguishes “eternal laws” from “laws of priesthood administration and Church management”.  This division seems to track the “doctrine/policy” distinction that has been so popular in Mormon discourse in recent years, and it strikes me as not unreasonable (as distinctions go).  But notice how the chapter describes the similarities and differences between these two kinds of laws:

God’s laws include doctrine, principles, commandments, ordinances, and covenants, as well as Church policies and practices He reveals through His prophets.

The “policies and practices” of the Church are necessarily REVEALED BY GOD, according to this sentence.  Not just the “doctrines” and other weightier categories of teaching.  The “policies and practices” too.  There’s no mention of policies that might be something less-than-revealed, like the result of executive decisions made by God’s authorized leaders that weren’t necessarily personally dictated by the Almighty Himself.  Nope.  Even “policies” are necessarily direct products of revelation, we’re told.

When the text elaborates on the differences between the two types of laws, the “revealed” nature of both is still maintained:

Explain that some laws the Lord reveals are eternal, such as those associated with the plan of salvation. These laws do not change. However, the Lord may at times emphasize certain eternal laws because of social changes and the needs of His Church or the world. Write do not change next to “Eternal laws” on the board.

Point out that there are also laws in the Church that may change as directed by the Lord through His prophets. These include laws that direct the priesthood administration of the gospel and its ordinances and relate to the organization and management of the Lord’s Church and His people. Some of these laws may also be referred to as Church policies or practices. As prophets and apostles seek the Lord’s inspiration and counsel together, they may make adjustments to these laws according to the Lord’s will. These changes allow the Church to expand in an orderly way throughout the world and to address varying conditions and needs on the earth. Write may change next to “Laws of priesthood administration and Church management” on the board.

Again, notice how the quoted text draws various distinctions between the two types of “laws” — including their ability to be “changed” — but it doesn’t make room for either type to be anything less than “revealed” truth.  The divinely-dictated nature of both categories of “law” is a similarity between them, not a difference.

The tendency to believe “policies and practices” are every bit as “revealed” as doctrines or “eternal laws” is not unusual in the church.  But I’m dwelling on the issue because it has implications for how the priesthood ban fits into this larger scheme.  Might the ban fall outside both categories?  Might it have been something LESS than a revealed “policy or practice”, LESS than a revealed “law of priesthood administration and Church management”?  Behold, the manual tells you:

Next, divide the students into small groups or pairs, and give each student a copy of the following worksheet. Ask them to work together and complete the matching activity.

For each item, identify whether it is an example of (A) eternal laws (which do not change) or (B) laws of priesthood administration and Church management (which may change).

Anyone care to guess what the answer to question #4 is?  No need, for the manual tells you this too:

So there you go.  The priesthood ban was a “law of priesthood administration and Church management” — which isn’t obviously offensive as a description, since there’s no denying the reality that it WAS a church rule for many years — except we know from the definitions and descriptions given earlier in the chapter that it was therefore “revealed”, something that God Himself must have originated.

There’s a lot more to say about the content of this chapter, but there’s no denying that it UNAMBIGUOUSLY claims that THE PRIESTHOOD AND TEMPLE BAN WAS OF DIVINE ORIGIN.  The ban fits in the category of policies-and-practices-that-can-be-changed, rather than eternal, unchanging laws (of course), but that category is unambiguously described as containing teachings whose author is God.

What a mess.  In sum, we’ve now got a Gospel Topics essay that appears to say one thing (or at least to leave interpretation open), and curricular materials that unquestionably say a different thing.

You know what would be nice?  Reading an official statement — no, even just an official SENTENCE — from senior LDS church leaders that unambiguously declares that the priesthood ban either WAS divinely inspired or WASN’T divinely inspired.  Really, just ONE SENTENCE, that’s all.  It wouldn’t be hard to write.  It wouldn’t take hardly any time to compose.  It could go into a First Presidency letter.  It could be inserted into the race essay.  Lots of possibilities here.  (I’m obviously partial to one particular outcome, but there’s something to be said for clarity, regardless of which outcome emerges).

And it would also be nice to make both official curricular materials and other official online resources perfectly consistent with that sentence, whatever it ends up saying.

Is this really too much to ask?

Aaron C. Brown is a recovering lawyer and a founding member of the LDS group blog By Common Consent. In 2014 and 2015, he served as a High Councilor in his Seattle stake, where he focused on LGBT outreach efforts

All posts by Aaron Brown