Our Lady of Guadalupe, the Divine Feminine, and Joseph Smith’s First Vision 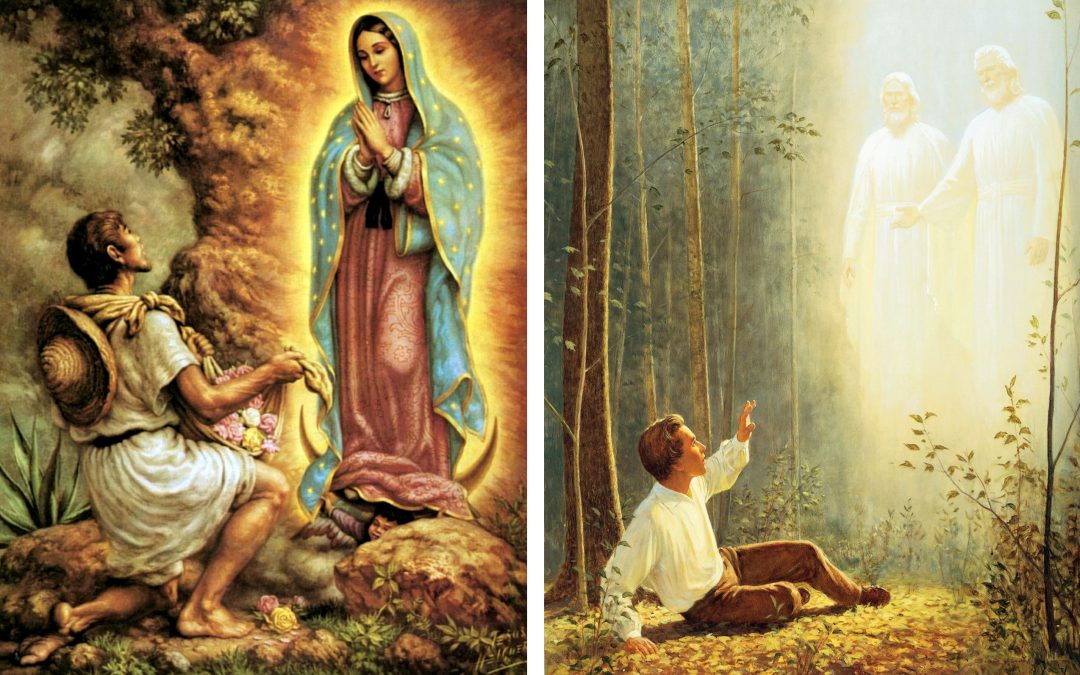 My family and I recently moved to Mexico on a one-year assignment for my job. My wife and I were both Spanish-speaking missionaries (she in Panama and I in the U.S.) and we are excited to immerse ourselves again in the culture and language (not to mention the food!).

A few weeks ago we visited a Catholic church in a small rural town of about 3,500 people on the coast of the Gulf of Mexico. Apart from a Presbyterian congregation, the Catholic parish is the only church in town and sits prominently in the middle of the community, with loud bells that ring out 30 minutes before mass every day.

My oldest daughter (eight years old) noticed the prominent position of the Virgin Mary in the decoration of the church interior. A large statue of Our Lady of Guadalupe occupies a central position behind the altar, with a crucifix with Jesus close by. I explained to her that Nuestra Señora de Guadalupe is perhaps the key identifying symbol of Mexican Catholicism and is also a prominent symbol of Mexican culture as a whole.

I later had the opportunity to talk to an Episcopal priest in the community where we are living. In our conversation about wider topics of religion, politics, and culture in Mexico, he said that many Mexican Protestants condemn the focus on Guadalupe as idolatry. (I was taught similar things growing up in the Mormon tradition.) As a Protestant, he agreed to an extent, but also said that he believes it to be a manifestation of the yearning for the Divine Feminine in Mexican spirituality that is otherwise absent in a strongly patriarchal Catholic culture. Given that reality, he says he doesn’t worry too much about the strong religious focus on Nuestra Señora de Guadalupe: if it helps the people connect with the feminine side of spirituality, all the better.

This led me to do more research on the tradition of Our Lady of Guadalupe in Mexican spirituality and religion. It begins with the story of Mexican peasant Juan Diego who, in 1531, experiences a vision of the Virgin Mary who gives him a special mission. I won’t recount the full story here (see here, here, here, here, or here for details), but what struck me was a variety of parallels to the Joseph Smith First Vision account in Mormonism. Specifically:

One key difference, however, is that Bishop Zumarraga believes the sign and plans begin to build a shrine to the Virgin Mary on that spot (now the Basilica of Our Lady of Guadalupe in Mexico City). Contemporary religious leaders in Joseph Smith’s day, however, continued in their disbelief.