Knocking at the Tabernacle Door: Waiting in Line with Ordain Women 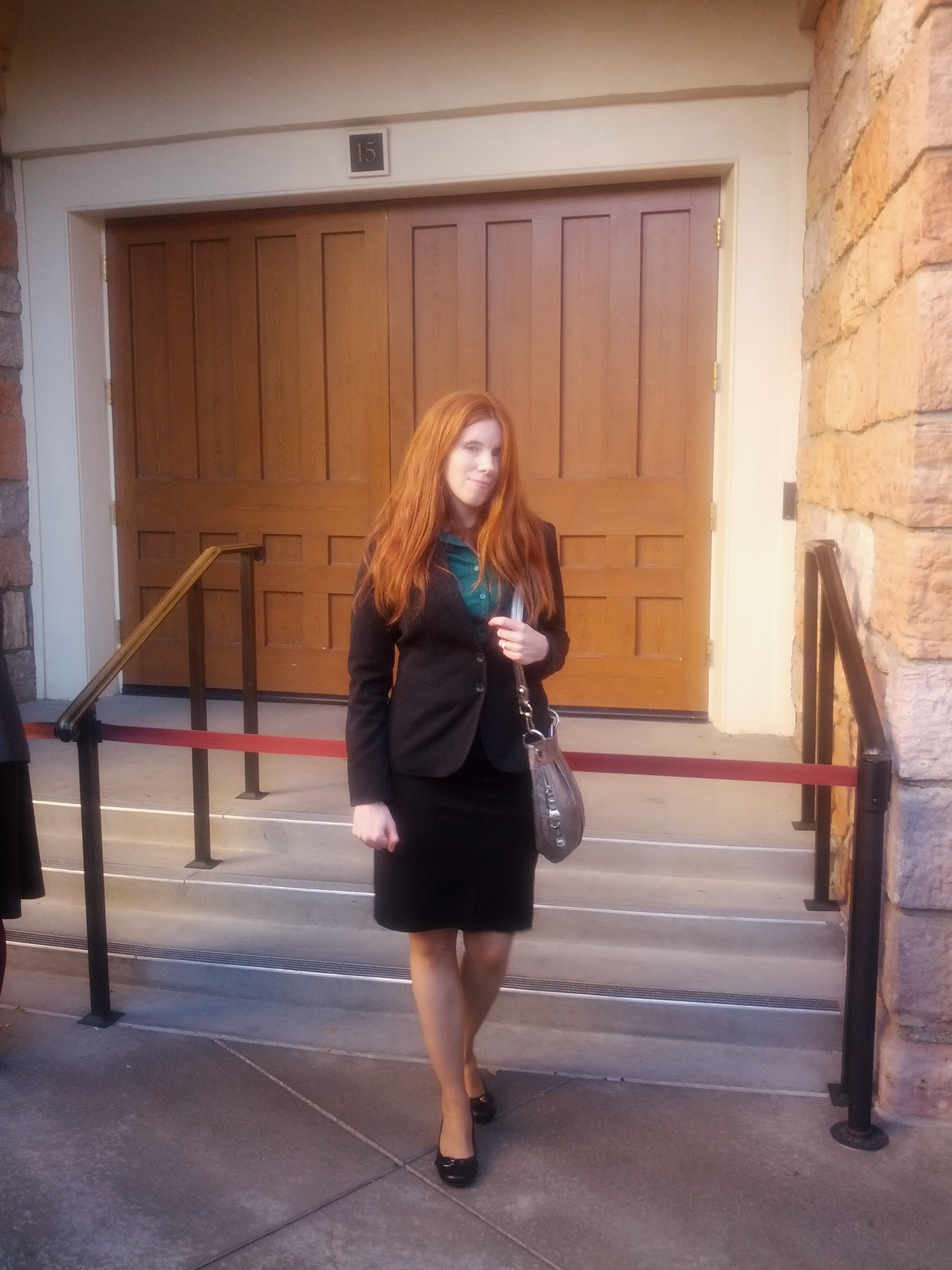 I really did not expect to be waiting in the standby line for Priesthood Session.

When Ordain Women came out with their website, I felt no call to join them. Quite the opposite, in fact. I wished Kate Kelly had waited, and given people like me more chance to share the history of women giving blessings in the early church and being set apart by Joseph as temple healers, to point out the lack of doctrine on all-male ordination, to encourage women to use and talk about their spiritual gifts in prophecy, healing, and all the things listed in the scriptures, without the pressure of directly addressing women’s ordination at the same time. When I heard about Ordain Women’s plans for Priesthood session this year, I worried that this action would radicalize people against the idea of any action at all to improve women’s position in the church. I was concerned that people would never accept the history, the basic facts, while being presented directly with women’s ordination as the logical conclusion. I wrung my hands as I saw non-doctrinal explanations for an all-male priesthood become further entrenched in the minds of church members as they reached for counter-arguments to Ordain Women’s well-researched platform. “Motherhood as the parallel to priesthood” is not doctrinal, not logical, and diminishes the divine calling of fatherhood. And the idea that men need the priesthood because naturally they’re such lazy, immoral layabouts that without it they wouldn’t be involved in church and family…really? And the millions of good fathers the world over with no priesthood? I am really concerned that this one might actually take hold, and teach us terrible, untrue things about the nature of men. I completely respect the members of Ordain Women. I completely respect their declaration that they are being led by the Spirit to bring this issue to the attention of church leaders. It is not my within my ability or my jurisdiction to judge that, and I believe it takes many different kinds, many different points of view, to accomplish the good that needs to be done on this earth. But from my point of view, I wasn’t sure whether Ordain Women could ever do any more than further complicate things. 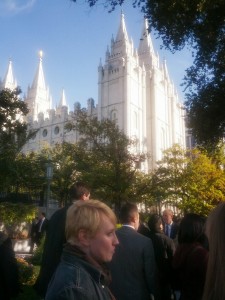 My view from standing in line

And yet there I was, waiting in the standby line for Priesthood Session. Sister missionaries hovered around the line with cheerful smiles, and Ruth Todd even popped in for a minute, shaking hands, and explaining once more that we wouldn’t be let in, and of course, lots and lots of smiling.

I got involved because of the response. The pure naked ugly being thrown around by people who were supposed to be fellow Saints. The blind ignorance and hypocrisy of coming down in fury on a person politely asking for more knowledge, claiming that their questioning was “contention” while in the same breath calling others stupid, questioning their testimonies, and telling them they should just leave the church. And then the church’s announcement that the women wouldn’t be allowed in, which I truthfully did not expect. That together with the announcement that Priesthood session would be streamed live and the simultaneous scramble to convince the men to go into the Stake centers to watch it anyway, and the general response of, “You can see it at home! What’s the big mystery now?” showed that people really did not understand Ordain Women’s point in showing up. It wasn’t about curiosity. It was about inclusion. It was about asking questions.

And it was that need for the ability to question that brought me to Temple Square, after a 16 hour train ride with little food and poor sleep. 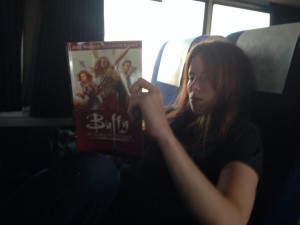 The LDS church as I see it has two wonderful points that make it stand out, that make it worth fighting to stay with even when I don’t fit in and I never have. One is the eternal quest for knowledge and the flexibility to change that comes with it. Two is the notion of radical unity. I don’t see this as unity of thought and action. That would be unnatural and frankly boring. I see it as unity of spirit, unity of love, unity that makes us care for each other and act with love even when we disagree. It was in defense of these two principles that I stood in line on Saturday. Ordain Women did not, as some have accused, “cause contention.” The rift already existed, and has for decades, and it won’t be solved until we discuss and learn. The LDS church is rooted in the idea of continuing revelation, of ask and ye shall receive. Those who knock must not be silenced. 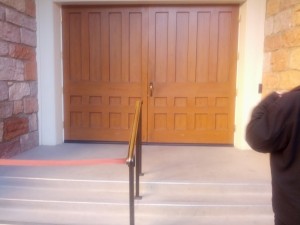 When my turn came to knock, the way was already barred. Literally. The massive Tabernacle doors closed to further inquiry just as I rounded the head of the line. As I stood pondering their blank faces and trying to absorb what their closure meant for me personally, a small green truck loaded with sacks of garbage pulled in front and blocked my view. 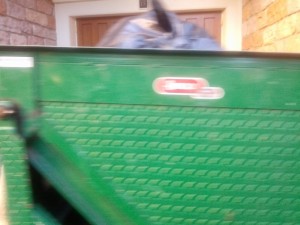 Though I didn’t fully absorb that someone was likely doing this to me, to us, on purpose, I felt the significance of that garbage in the pit of my stomach. This was what so many people thought of me, and of those other women and men, for daring to be here. Our place was to be swept up and bagged like the rotten fruit and old Twinkie wrappers now staring me in the face. This moment did not feel so great. 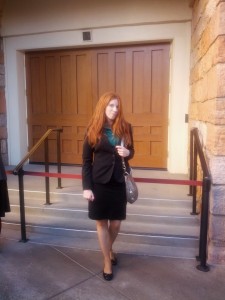 Neither did this one.

But as I turned to go, someone behind me called out that there were men watching us through the window. I looked over my shoulder. They stood at orderly intervals, three of them, probably security guards. They may have been wearing tags. I waved, small and sad, hoping to remind them of my humanity and show that I bore no ill will. Two remained frozen in place. One made eye contact, clearly sympathetic, and placed his hand over his heart.

At that moment, Kate Kelly began the closing hymn, “I Am a Child of God.” And I cried through the whole thing, back to the Tabernacle and the men inside. At first I tried to hide it, ashamed as I usually am of showing that kind of emotion. But as the song progressed, and I struggled to get a steady word out, I held my head up and pushed my hair out of my face, opening up to the cameras surrounding us. I had no good reason to hide. I should not care who saw me, tears on my cheeks, with nothing but sincerity and love in my heart. 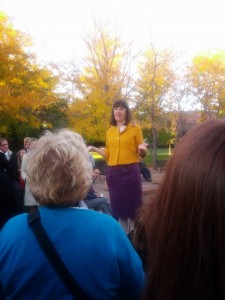 I came to this session to fight for Zion, and I found it there among those men and women, as we came together, sang together, stood in a really long line together, united in spite of differences, united in a desire for truth and knowledge and equity. 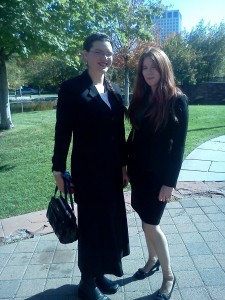 I believe there is room for us. 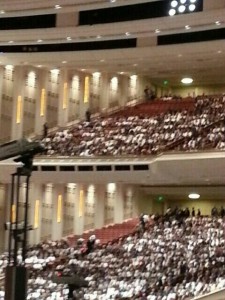 The scriptures command us to knock, and I will keep knocking, and keep speaking, that those who seek may find, and not be silenced; welcomed with love rather than spurned. I believe this is the heart of the Gospel. Don’t tell me that I should just go. I will not. I will sit on the doorstep and wait for an answer. Whether the waiting is pleasant or painful is up to you.