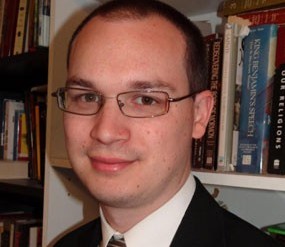 In the Mormon Blogosphere there has been some recent news that Kirk Caudle has officially resigned from the Lds church. If you are unfamiliar with who he is, this episode is for you. About 7 months ago Kirk and I recorded an interview in order to promote his podcast as well as to tell a little bit about this wonderful individual, but due to unfortunate circumstances I was not able to publish it until now.  In this part one we will be sharing this older episode with you.

Kirk received his MA in Interdisciplinary Studies (Spiritual Traditions and Ethics) from Marylhurst University, a small Roman Catholic liberal arts school founded by the Sisters of the Holy Names of Jesus and Mary. He additionally holds a BA degree from Cascade College, a satellite campus of Oklahoma Christian University, in Interdisciplinary Studies (Bible and History). Kirk is active in interfaith dialogue and regularly presents papers at academic conferences on Mormonism and other aspects of Religion and Philosophy. His professional teaching experience includes three years as a guest New Testament instructor at the Portland LDS Institute of Religion and religion instructor for Brigham Young University-Idaho.

Kirk wrote his Master’s thesis on, “Joseph Smith and the Eternal Possibilities of the Immortal Soul in Western Philosophical and Theological Thought.” He is an active member of multiple scholarly organizations including the Mormon Scholars in the Humanities, the Society for Mormon Philosophy and Theology, and the American Academy of Religion (AAR). As of 2012, he and Dr. Susanna Morrill, associate professor of Religious Studies at Lewis and Clark College, have co-chaired the Mormon Studies session of the Pacific Northwest Region of the AAR. Kirk resides in Portland, OR with his 4 children and his wife of 14 years.

Thank you so much for listening and watch for Part two where Kirk provides an update to his faith Journey.

Brian Kissell has a deep love for Mormon podcasts, as they have been an extremely influential tool for him as he has traveled on this wonderful faith journey within the Mormon World. He believes in big tent Mormonism, and is interested in recognizing better ways to value and increase diversity, while simultaneously increasing our ability as a culture for differing individuals to talk to each other in more productive and healthy ways. Brian is also the host of a few other podcasts. One of these is a short faithful devotional podcast centered around Mormon quotes which can be found at Mormonquotes.wordpress.com. Another is a psychology podcast which can be found at Methodologyforpsychology.org.

All posts by Brian Kissell