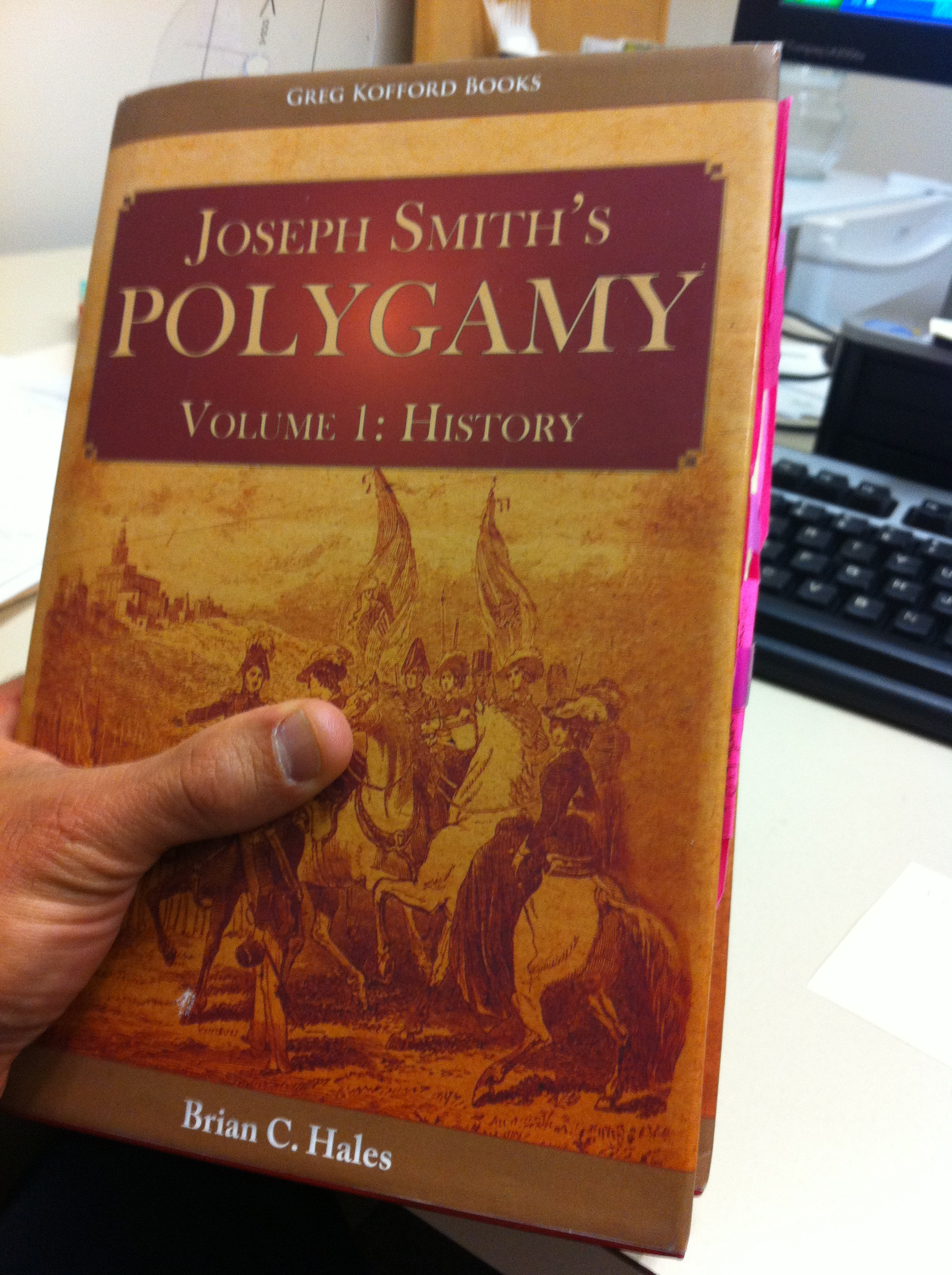 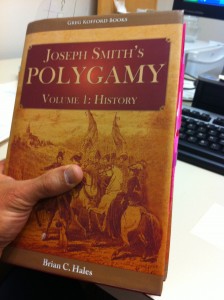 Note:
This is a book review of only Volume 1 of Brian C. Hales’ Joseph Smith’s Polygamy. The reviews of Part 2 and 3 will come later.

“If polygamy is the most controversial story in the history of Mormonism, ‘polyandry’ must be its darkest, least understood and most troubling chapter.”
– Andrew Ehat.

Although the Utah LDS church abandoned polygamy in the early twentieth century after the President Joseph F. Smith’s Second Manifesto, it still remains the religious practice most readily associated with Mormonism. Just like novels of the latter nineteenth and early twentieth centuries (the antagonist in the first Sherlock Holmes novel, A Study in Scarlet, was provoked to murder by two Mormon polygamists), polygamy still fascinates popular culture. Just off the top of my head, I can think of three shows dealing with Mormon polygamy: Sister Wives, Polygamy USA, and Big Love.

Why the fascination? Polygamy seems to exploit humanity’s most intimate feelings: sex and religion. And, with Mormonism’s early clandestine polygamous practices, add secrecy to sex and religion. Now, we have the perfect triple threat: sex, religion, and secrecy.

“…Polygamy is an interesting thing because it serves as a Rorschach test. People project onto Joseph Smith and polygamists their own sense about human nature.” – Dr. Richard L. Bushman

I am a fully active member of the LDS Church. My personal interest in early Mormon polygamy grew out of what many have called a “faith crisis”. It was the clandestine practice of early Mormon polygamy that forced me to re-access my LDS faith and eventually reconstruct it into something that still carried meaning in my life, but also acknowledge some of Mormonism’s more difficult historical aspects.

In order for me to recommend a book about early Mormon polygamy it must address the following in a fair and open manner:

Hales’ not only addresses the above 10 requirements, he provides an impressive in-depth discussion on all of them.
The following are questions for which I wanted some clarification and was hoping Brian C. Hales would address in his first volume of his three-part volume dealing with early Mormon Polygamy:

1. Can one call something a “marriage” when the ceremony is done secretly and is not acknowledge by the government as being a legal contract?
2. When did the idea and teaching of “eternal marriage” first enter the mind of Joseph Smith and when was it first taught?
3. When were the first intimations, from non-hostile sources, of polygamy being practiced?
4. When did the concept of “eternal marriage” tie to polygamy?
5. When did Joseph Smith first publicly preach about polygamy?
6. Who was the second Mormon man to enter into an authorized polygamous marriage?

Once again, Hales not only addresses the above 6 questions, he provides an impressive in-depth discussion on all of them.

In my readings, I have found that either the author (or his/her audience) will find polygamy so tantalizing and scandalous that any report that paints Mormon polygamy in that light will immediately be grasped, while the historical records that paint polygamy in less sensuous light, are not considered. The other extreme is also hugely problematic. That is, the LDS apologist that downplays the sexual dynamic and secret nature of Joseph Smith’s polygamy is completely over looked.

Brian Hales points out right at the beginning the problem with writing about early Mormon polygamy. And that is the primary contemporary documentation. There were no documents written during the early years of polygamy except for two, one of them being Section 132 of The Doctrine and Covenants. The other difficulties are:

1. We are only given opposing views.
2. There is no defense of polygamy for the first decade of its practice.
3. Nothing in the historical record is clear about the unfolding of its practice.

The strength of Hales’ book is that, for most of the book, he hits the sweet spot. He presents so much of the primary documents as well as the different conclusions from previous historians who have written about Joseph Smith’s polygamy. I appreciated him bringing up the respected and often controversial, Dr. Michael Quinn’s work as well as Dr. Todd Compton’s and Richard Van Wagoner’s scholarly works. He honestly presents their conclusions and then points out why he disagrees. He does this in a very respectful way, avoiding any ad-hominem attacks. Hales even goes so far as to provide primary documentation of some of Quinn’s presentations, papers, and emails to Hales where Quinn out-right disagrees with Hales’ conclusions. Although the reader may disagree with Hales’ conclusions, he/she is able to do so only because Hales has presented enough primary documentation and alternative conclusions, that allows the reader to do so.

Of all the different books I’ve read about Mormon polygamy, Brian Hales has done the best job of handling Fawn Brodie’s allegations in her land mark book, No Man Knows My History, of Joseph Smith having sired multiple children through polygamous relationships. Hales once again goes back to the primary documents and points out the difficulties of painting a clear picture of what happened, but more importantly, points out the sloppy historical reconstruction that Brodie attempts. He clearly shows where Brodie is clearly wrong and where she might be correct. Once again, Hales does this respectfully and in a scholarly manner. Hales does not hide anything.

Regarding primary documents, Hales provides actual photos of some of the historical records. I was excited to see photos of Andrew Jenson’s handwritten manuscripts that were collected as he was traveling through Utah in the 19th century interviewing some of Joseph Smith’s polygamous wives and trying to gather the names of others that were then deceased. One document, that really excited me was a Jenson manuscript that had Eliza R. Snow’s handwriting where Snow had written down the name of Fanny Alger being one of Joseph’s polygamous wives.

Hales’ charts were probably the thing I found most helpful. For example, on a two-page spread, Hales has documented in table form the names of children attributed to Joseph Smith’s polygamous relationships, the mother, the birth date of the child, the probability that the child is Joseph Smith’s based on either statements of the mother or others, genetic testing, etc. Instead of having to go back over chapters and chapters, the information is right there and is easy to compare. He does the same with dating the reports of the “angel with the drawn sword” accounts, documenting the conjegual visits between Joseph Smith and his polygamous/polyandrous wives, and with the primary documentations of the Fanny Alger – Joseph Smith relationship.

When I read a historical book, I am one of those nerds that actually looks at the foot-notes to see from where the author is drawing their conclusions. With most books, that requires me having a book mark at the back of the book where the footnotes are; so I am constantly flipping back-and-forth in the book. With Hales’ book, the footnotes are at the bottom of each page. I loved that. In speaking with the main editor at Kofford Books, this was not an easy task to do, which made me appreciate this even more. 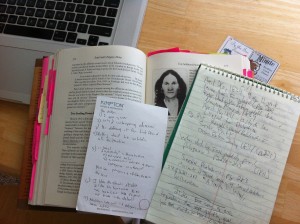 The other part of the book that I appreciated was at the end of every chapter, Hales summarized the chapter. After reading primary documents, differing conclusions, and arguments for the different conclusions, it is easy to forget what you had read. The summaries were extremely helpful in bringing all these complicated issues together in a nice and tight package.

Now there were a few problems with the book.

With some of Hales’ conclusions, there were at times too much conjecture (see page 207); to many “perhaps”. At times Hales’ seems to equivocate with the word “marriage” as it relates to Joseph Smith’s polygamy. The biggest problem I had was how Hales’ used Doctrine and Covenants section 132 to proof text that sexual polyandry was no part of Joseph Smiths theology, leading to the conclusion that Joseph Smith did not practice it (sexual polyandry).

So, to whom would I recommend this book? To truly appreciate what this book is and has done, one has to have some background of early Mormon polygamy. This book is not an introduction; it is an advanced course. I had a non-LDS friend at work ask me what I was reading one day and I told him. He said, “Oh, my wife would like that book.” I told him probably not, but perhaps she should start with a scholarly book that deals with Mormonism in general and then work her way up to this book and I would be happy to recommend a reading list for her. I know, it sounds a bit snobbish.

I can’t wait to dig into Volume 2…