Was Joseph Smith Ever Convicted of a Crime? 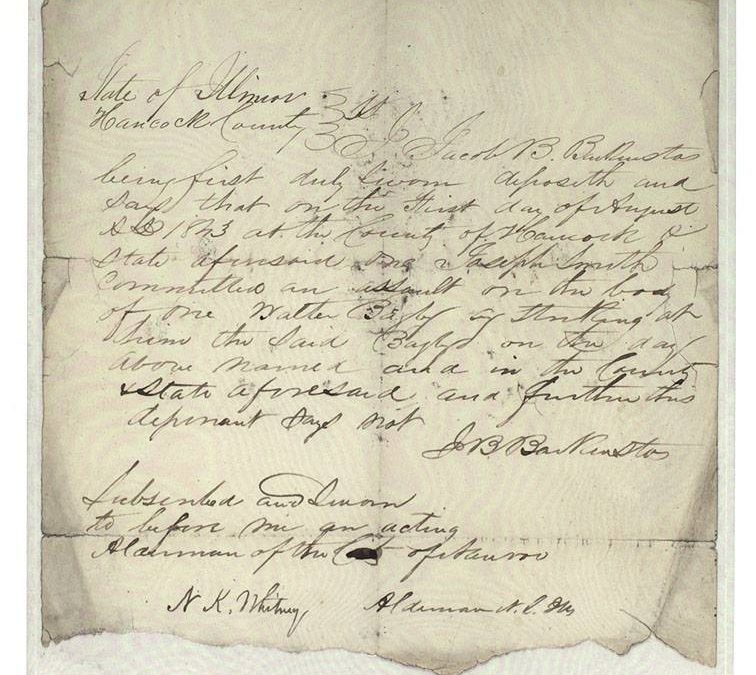 For decades historians, apologists, and anti-Mormons have been debating this very question: was Joseph Smith ever convicted of a crime? While there have been discussions on this topic since the beginnings of Mormonism, the debate really got started in the 1970s. Learning of newly discovered evidence of Joseph Smith’s trial for being a disorderly person, Mormon Historian Marvin Hill published in BYU Studies Joseph Smith and the 1826 Trial: New Evidence and New Difficulties.[1] Two years later Wesley P. Walters published an article entitled, Joseph Smith’s Bainbridge, N.Y., Court Trial,[2] which argued he had been convicted of a crime. Walters was responded too by Mormon Historian Gordon Madsen, again in a BYU Studies article, Joseph Smith’s 1826 Trial: The Legal Setting.[3]

In the following decades, this question has been discussed over and over. Many cases have been debated, but the most common are the 1826 disorderly person trial in New York, assault and battery in Ohio, performing marriages without a license in Ohio, attempted murder in Ohio, fraud due to the Kirtland Banking Society in Kirtland, and being an accessory to the attempted assassination of Lilburn Boggs in Missouri. In some of these cases it is clear that Joseph Smith was not convicted of a crime and in others there is evidence for both sides of the argument. Thus, questions still remain.

However, some Mormon historians incorrectly claim, and have for years, that Joseph Smith has never been convicted of a crime. Much of this incorrect belief starts with Brigham Young. On July 11, 1852 Brigham Young stated in a speech at the Salt Lake Tabernacle

I know for myself that Joseph Smith was the subject of forty-eight law-suits, and the most of them I witnessed with my own eyes; but not one action could ever be made to bear against him. No law or constitutional right did he ever violate. He was innocent and virtuous; he kept the law of his country, and lived above it; out of forty-eight law suits, (and I was with him in the most of them), not one charge could be substantiated against him.[4]

FAIRMORMON, the Foundation for Apologetic Information & Research, who describe themselves as an organization that provides “well-documented answers to criticisms of LDS doctrine, belief and practice,” also claim that Joseph Smith was never convicted of a crime. Their website hosts a speech given at a FAIR conference by Joseph Bentley, a lawyer who worked on the Joseph Smith Paper Legal volumes. In this speech Bentley states

“Joseph Smith was persecuted in courts of law as much as anyone I know. But he was never found guilty of any crime, and his name cannot be tarnished in that way.”[5]

Recently, BYU Studies published a book, Sustaining the Law: Joseph Smith’s Legal Encounters, which discuss Joseph Smith’s interaction with the law. It discusses such topics as his reputation as a witness in New York, his 1826 trial for being a disorderly person, the copyright of the Book of Mormon, marriages in Kirtland and Nauvoo, the Kirtland Safety Society, the Nauvoo Charter, Habeas Corpus, and the Nauvoo Expositor. In this volume the editors claim

he was never convicted of any criminal offense. Whenever he was given a fair hearing, he was found to be an upstanding and honest citizen.[6]

However, this is incorrect. We need not get into the common debates about Joseph Smith’s 1826 trial or if the Kirtland Banking Society was legal or the other cases that have been debated for decades. This is because Smith was convicted of assault on August 1, 1843. This assault case is so clear, from records of the time, that there really is no debate. For whatever reason, this case has basically been ignored. On August 1, 1843, Joseph Smith assaulted Hancock County tax collector Walter Bagby. Joseph Smith, while riding in a buggy came across Bagby. They had a disagreement and Bagby called Smith a liar. Smith, enraged got out of his buggy and when Bagby saw this, he ran to pick up a rock to presumably defend himself. Before he could pick up the rock Smith either struck him multiple times, attempted to strike him, or choked him. William Clayton, one of Joseph Smith’s scribes was present and recorded what happened

P.M. went to Temple at 4 o clock J and Backenstos came up to the Temple. J began to tell me concerning a tax title which Hamilton had on me of the city lots he having got a Sheriffs Deed. J. told me to inquire of Bagby concerning it. While we were talking Bagby came up & J asked him concerning it. he denied all knowledge of it. J. told him that he had always been ready to pay all taxes when called upon & he did not think it good behavior to sell his lots when he was willing to pay the taxes whenever called upon. Bagby said he had done more for J. than for any other man in the County. J. reiterated that he had abused the citizens here and was always doing so. Bagby then told him he was a liar at which J. got out of his Buggy. When Bagby saw him get out he ran to pick up a stone to through at which J. was so enraged that he followed him & struck him two or three times. Esqr. Wells stepped between them & succeeded in getting them apart and J. told him to assess the fine and he was willing to pay it. J. rode down to Whitneys & got the fine assessed & then returned to the political meeting. Bagby staid a while muttering that J. was a coward &c.[7]

This event was also recorded, in part, in Joseph Smith’s own journal. Recorded twelve days later on Sunday August 13, 1843, it states

Mr. [Walter] Bagby. of Cartharge [Carthage]. who has exercised more despotic power over the inhibtants [inhabitants] of this city & than any despot of the Eastern country. I met. he gave me some abusive language took up a stone to throw at me I siezd him by the throat to choke him off—[9]

On the same date in his own personal journal, William Clayton also recorded that Smith referred to the incident as a “little skirmish.”[10]

The History of the Church recounts the incident in nearly the same manner, “Bagby called me a liar, and picked up a stone to throw at me, which so enraged me that I followed him a few steps, and struck him two or three times. Esquire Daniel H. Wells stepped between us and succeeded in separating us…. I rode down to Alderman Whitney . . . he imposed a fine which I paid.” In this version, following the later recorded version by Smith, Bagby had already picked up the stone. Also in this version, is Smith admitting guilt and paying a fine.

Oddly, in the newer volume Sustaining the Law, where the editors emphatically claim Smith “was never convicted of any criminal offense,” contains a summary of this event. In the volume’s own “Legal Chronology of Joseph Smith” it reads

JS, insulted by Hancock Co. tax collector Walter Bagbee, struck him, knocking him to the ground. JS asked Daniel H. Wells to allow him to plead guilty to Assult and Battery and pay a fine. Wells refused, saying in his opinion the blow was justified. JS went to Justice of the Peace Aaron Johnson, who took the plea and JS paid the fine.

While the volume got the facts of this case incorrect, particularly who took Smith’s guilty plea and Wells involvement in the incident, it does admit Smith committed a crime.

It was Alderman Newel K. Whitney, a justice of the peace in Nauvoo, that Smith admitted guilt. Jacob B. Backenstos, a friend to the Mormons and later sheriff of Hancock County witnessed the events and provided Whitney an affidavit of what he saw. His affidavit reads:

I Jacob B. Backenstos
being first duly sworn deposeth and
says that on the first day of August
A.D. 1843 at the County of Hancock &
state aforesaid one Joseph Smith
committed an assault on the body
of one Walter Bagby by striking at
him the said Bagby on the day
above named and in the County
state aforesaid and further this
deponent saith not
J.B. Backenstos

Regardless, under either version of the events, Smith was convicted of a crime. He was convicted by his own words when he pled guilty before the Justice of the Peace. Once one has committed to a guilty plea, a judgment of conviction is entered and a sentence is imposed. In this case, the sentence was a fine, which Smith paid. Anyone would be hard pressed to claim that he was not given a fair hearing, as Joseph Smith the sole witness, pled guilty before a friendly Justice of the Peace in the city in which he was the Mayor. Sadly, apologists and historians could have used this as an example of Smith showing maturity by taking responsibility for a mistake he made. Instead, the mythology of a near perfect being is still being argued by many.

Joseph Smith is human and was convicted of a crime. It is time for everyone to drop the claim he never was convicted and treat him as he truly was, a complex man who made mistakes, and in this case, took responsibility for them.

[10] The Nauvoo Diaries of William Clayton, 27. The relevant portion reads, “P.M. Prest J. offered some complaints of the citizens of Nauvoo 1st because some young men sat on the ladies camp ground and laughed & mocked during meeting. He next spake of Walter Bagby & the little skirmish he had with him about a week ago he spoke of Esq Wells interfering when he had no business.

John S. Dinger is a graduate of the S. J. Quinney College of Law, University of Utah, Salt Lake City, where he was on the Utah Law Review. In addition to a juris doctorate, he holds degrees in political science and history from the University of Utah. He has published in the Journal of Mormon History, John Whitmer Historical Association Journal, Idaho Law Review, and Utah Law Review. His book, The Nauvoo High Council and City Council Minutes (Signature Books, 2011), won the Best Documentary Book Award from the Mormon History Association and the Best Book Award from the John Whitmer Historical Association. In 2013 he published Significant Textual Changes in the Book of Mormon: The First Printed Edition Compared to the Manuscripts and to the Subsequent Major LDS English Printed Editions (Smith-Pettit Foundation, 2013). He is presently a Deputy Prosecuting Attorney for Ada County in Boise, Idaho and a member of the Internet Crimes Against Children taskforce.

All posts by John Dinger