Joseph Smith and the Resacralization of Marriage 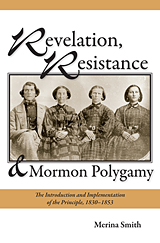 Joseph Smith and the Resacralization of Marriage

By Dr. Merina Smith, author of,  Revelation, Resistance, and Polygamy: The Introduction and Implementation of the Principle

The religious movements that grew out of the Second Great Awakening, Mormonism among them, hearkened back to the ancient Gospel when formulating their theology.  All were seeking to reintroduce the pure Gospel of Christ.  Joseph Smith’s efforts were unusual however, not just because he introduced a new scripture that explained the history of the American Continent, but because he sought to encompass the whole sweep of religious history in his movement.  Like his Puritan ancestors, he was deeply interested in the Old Testament, and hoped to glean religious principles from it as well as from the New Testament.  When he studied the Old Testament on his own and with other men, he saw what most of us see as well—much of the Old Testament is concerned with family and cultural transmission through familial lines.

Family is central to the very first chapter of Genesis, which sets the stage for the rest of he Old Testament. God creates man and woman as his crowning achievement and commands them to multiply and replenish the earth—to create families.  The final verse of the Old Testament, a verse that is reiterated in the Doctrine and Covenants numerous times, reminds us that the hearts of the fathers should be turned to the children and the hearts of the children to the fathers, lest the earth be smitten with a curse.  Elijah appeared to Joseph Smith and Oliver Cowdery in the Kirtland Temple to reiterate this command.  Doctrine and Covenants 2:1-3 also connects this commandment to priesthood.  Joseph Smith sought to interweave this priesthood-connected familial principle into Mormonism in various ways, and in doing so was hearkening back to his Puritan ancestry, because American Puritans emphasized Old Testament stories as well.  They liked to compare themselves to the Children of Israel and regarded themselves as heirs to the Abrahamic Covenant.

Puritans regarded marriage as a civil contract, unlike Catholics, to whom it was a sacrament.  By connecting marriage and priesthood, Joseph Smith moved toward a sacramental view of marriage, a view that fit well with early Mormons’ struggle to cohere as a people.  Gaining some control over marriage was an important way to facilitate community coherence and to deal with problems that arose when one spouse joined the church and the other did not, or in cases of abandonment.  Mormons sought clerical power, not always successfully, to solemnize marriages in Ohio, but since they had a lay clergy, the question of who could solemnize marriages was a tricky one for the state.  Mormons were naturally frustrated by this, but the dichotomy between civil and sacramental marriage left an opening for them in controlling marriage within the church.  If true marriage was sanctioned by God, the power to say which marriages were legitimate was within the purview of the church.

It was a case of marital uncertainty that furthered the sacramental understanding of marriage.  Newell Knight and Lydia Goldthwaite met in Kirtland and wished to be married there by Joseph Smith in 1836, though Lydia had been abandoned by her husband, Calvin Bailey, whose whereabouts was unknown.  Goldthwaite was concerned about marrying again without having divorced Bailey, but Joseph Smith reassured her that her marriage to Knight was approved of God.  When he performed the marriage ceremony for the couple, he used words that he recorded in his diary were “original with me.”  He informed the couple and the “conciderable company” that had assembled to witness the ceremony that marriage was an “institution of heaven instituted in the Garden of Eden” which must be solemnized by the everlasting priesthood.  He then pronounced them husband and wife in the name of God and gave them the “blessings of Adam and Eve.”

Later marriage ceremonies performed by Smith were described in his journal as being performed according to the “rules and regulations of the church.”  Soon, moving beyond the blessings given to Adam and Eve, Smith included “the blessings of Abraham, Isaac and Jacob” when solemnizing marriage, thus presaging the Old Testament thinking about marriage that eventually worked itself into the Saints justification for instituting polygamy.  The important point is, however, that for church members, the authority to not only perform marriages but to solemnize and sanctify them was taken from the state and vested in the church.  Once members understood that this authority rested in the church (and hence in their thinking with God) then the church was in a position to institute radical changes in forms of marriage.

I argue in my book that introducing polygamy was a process.  The idea had to be fit into a theological narrative that early Mormons could understand and support before those skeptical of polygamy (and that was pretty much everybody at first) could accept it.  Resacralization of marriage was an important step in that process.

All posts by Merina Smith