Joseph Smith and The Order of Enoch

Joseph Smith and The Order of Enoch

Michael asked me to last week to author a couple of posts about the law of consecration for the blog. He’d listened to Jared Anderson’s podcast on the subject, in which I participated as a member of the discussion group. It was one of the best discussions about consecration I’ve ever been a part of, with tremendously insightful contributions all around, and I highly recommend it for a listen.

It’s been rightly noted that we didn’t spend much time on the historical circumstances surrounding “the Law”, which is true. We agreed before the discussion that the historical setting, while absolutely an interesting aspect, was less vital than doctrinal and theological implications. This post is an effort to cover some of that ground. Much of the historical context surrounding the law of consecration is actually contained in the revelations themselves. I say revelations, because unlike the word of wisdom, the three degrees of glory, or baptism for the dead; the law of consecration is not neatly set forth in one or two clear communications from the Lord to the prophet. To have a complete picture of what was going on with Joseph Smith, Edward Partridge, and the early saints as regards the “United Order”, you have to study (at least) Doctrine and Covenants sections 38, 42, 52, 56, 70, 72, 78, 84, 98, 104, 105 with some study in Moses 6-7 in the Pearl of Great Price.

Even more study is necessary to understand consecration as a principle, as a temple covenant, and its larger place in the church and in our lives today. Such will be the aim of my follow-up post.

A first historical consideration is that Joseph Smith’s effort to build a cooperative society was hardly unique in 19th century America. Arthur Bestor’s book “Backwoods Utopias” is one of the best catalogs of pre-Mormon sectarian movements who made similar efforts to follow the pattern set forth in the Acts of the Apostles where Peter (and later Stephen) received all the property of the church and redistributed it to care for the poor and to build up the church. This sparse biblical reference to a form of consecration in the first century Christian church inspired the imaginations of more than one charismatic bible thumper; as paired with it, there is the foreboding account of Ananias and Sapphira who sought to deceive Peter by keeping for themselves part of the price of a sale of land. They both dropped dead in front of the apostle when they lied about the real estate deal. A consideration of any of these societies in detail is beyond my scope here, except to say that Joseph certainly had precursors and contemporaries who sought to establish economically cooperative societies.

In fact, it was a group of recent converts in Kirtland, associated with Newel K. Whitney, and called “the family”, already living in a communal society that brought about the impetus for Joseph’s revelation, which directed the church to found a United Order. Joseph met them in early February of 1831, and within a few days, received section 42, which Joseph declared to be the true pattern by which the Lord intended his saints to live. The Twelve received and sustained the revelation immediately and it was adopted by common consent of the body of the church shortly thereafter.

The functionality of the United Order was fairly simple. Individual Saints made an holy covenant before God and earthly witnesses to observe and obey the law of consecration. They then deeded all of their property to the church through the Bishop in Zion. The man Joseph chose for this unusual responsibility was Edward Partridge. 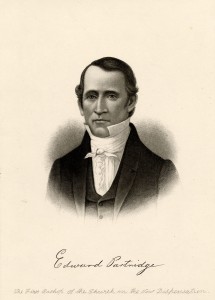 Bishop Partridge was converted to the church from the body of Sidney Rigdon’s Campbellite congregation in Ohio. He was baptized by Joseph Smith in Fayette, in December of 1830, and was properly adored in the church by many. His new position would, however, prove to turn some of his friends, antagonistic. After receiving the entirety of community property, individuals declared to Partridge what was necessary for their subsistence, a matter called in the revelation, their stewardship. They were also encouraged to declare modest wants, in addition to their needs. Partridge then employed the discernment and revelation pertinent to his calling and meted out to individuals an allowance on which they were to live. We naturally relate to such ideas in monetary terms, but all property was part of the system. Your home and farm were deeded on actual legal contracts to the church. Likewise, your wagon and your livestock, your mill, your shop, or your small business, belonged to the kingdom. The eggs from one man’s hens fed another man’s family, and his heifer’s milk made your family’s cheese.

An actual deed, transferring ownership of property to the Bishop at Zion (Independence, Missiouri)

The challenge that this principle posed to the young church cannot be understated. Problems emerged almost immediately, and Joseph sought revelation and guidance on the matter, practically on a constant basis. It only takes a little imagination to comprehend the kinds of natural impasses that beset the Order. Pride led some members to inflate their subsistence so that they could own the things their neighbors could not. Others complained that a neighbor’s job was too easy, and those laboring harder for the support of the community should receive more, in kind. The Lord counseled the saints to “not covet [their] own property” and “give liberally of [their] substance to all”, but the problems persisted. The matter of tithing made living on little, even more difficult.

Something many latter-day saints don’t realize is that the law of tithing was designed to function in combination with the United Order, rather than in place of it. After saints had been issued their stewardship, they tithed back roughly 2% of the property they were given for their survival to the church. Hugh Nibley explains this principle for those who mistakenly believe that tithing was given (as a merciful lesser law) to the church to replace consecration… a belief that, while popular, has no scriptural or historical basis.

“Tithing is not consecration and does not supersede it. To pay a tithe of what is sufficient and no more is to pay a real tithe, given out of one’s own necessities, something of a test and a sacrifice, as tithing is meant to be. Ten percent taken out of a surplus that one will never miss or need is indeed a strange ‘offering’.”

The 2% paid by these early saints likely felt more like 20% or more when sacrificed out of only what they received for their needs.

The dissolution of the United Order among the saints was a great disappointment for the prophet, and it would seem, also for the Lord. His position on this law is clear and uncompromising:

“the soul that sins against this covenant, and hardeneth his heart against it, shall be dealt with according to the laws of my church, and shall be delivered over to the buffetings of Satan until the day of redemption.” (D&C 82:21)

“it is not given that one man should possess that which is above another, wherefore the world lieth in sin.” (D&C 49:20)

Acknowledgement of these scriptural injunctions, leads us to some key questions regarding the current state of our consecration covenant. I will pose them now for consideration, and answer them in my following post regarding the doctrinal and theological implications of the law:

If the law of consecration remains in force, how are we expected to live it? If the United Order is still the intended institution, how can any of us keep this covenant here and now, without living in a cooperative society? Until all the saints together can abide a united order, what are we to do?

Brigham Young spoke in 1876 of the urgency he felt toward embracing the United Order.

“Some of our Elders, and, in fact, some of the Twelve will tell you, ‘yes, yes, the Order is a splendid principle and will bring happiness, etc, but it is not hardly time to enter into it, wait a little while until the people understand it a little better.’ Why, they are fools! They don’t know what they talk about. They have ears to hear and will not hearken, and have eyes to see and will not understand. When our conduct hedges up the way of angels how can they bless us? How can they help us work out our salvation? When Joseph Smith was alive I can say that I never heard him lay one plan out for the people but would have been a success if it had been carried out as he directed”. 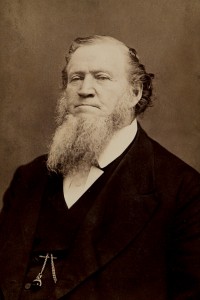 The idea that at some future point, conditions for living the law will be more favorable is at best wishful thinking, and at worst, a deception of “the prince of this world”, who would have us believe that we can get anything we want with money. Hugh Nibley again:

“The program is an urgent one, and since the world is steadily getting worse, the chances of carrying it out in a sympathetic environment have not been improving… The world is as ready for the system now as it ever will be; there is nothing the least bit negative about it. This is the way God means to provide for his people: it is “this commandment I give unto my servants for their benefit… and for a reward of their diligence and for their security; for food and for raiment; for an inheritance; for houses and for lands” (D&C 70:15-16). Yes, the conditions were different then, but here the Lord tells us that it will work “in whatsoever circumstances I, the Lord, shall place them, and whithersoever I, the Lord, shall send them” (D&C 70:16). “Behold, I, the Lord, am merciful and shall bless them, and they shall enter into the joy of these things.” (D&C 70:18). The express purpose of the law of consecration is the building up of Zion; it is God’s plan, and his alone, for doing that. We do not wait until Zion is here to observe it; it is rather the means of establishing Zion upon the earth.”