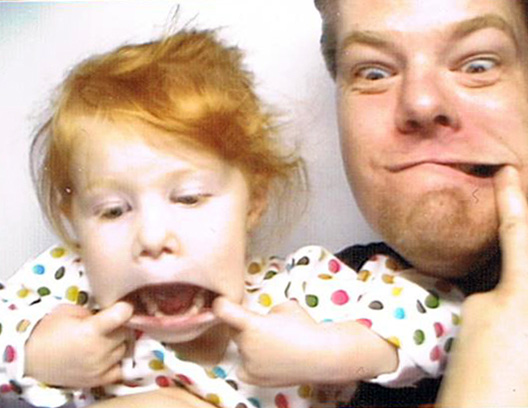 Actually 263. A baby had recently been born into our family. And I was her stay-at-home dad while her mom taught school.

Wyoming isn’t really made for stay-at-home dads. It consists mainly of empty, windy, baby-unfriendly sageland strung with barbed wire and dolloped with cow pies. The men work in the fields, the oilrigs, or the mines. The women work with the house, the children, the animals. Or they’re at playgroup.

The only reason I know this is because I saw them one fall day at the park across from the high school. I had brought my 18-month old daughter to work a little energy off. About five moms were gathered at a picnic table talking while their kids played.

I knew them all. They were from my ward. But none of them seemed to recognize me

Being the adrenaline junkie she is, my daughter quickly developed a game on the play equipment apparently called “run to the end of the catwalk and stop yourself from falling 6 feet to the ground by grabbing the bars.”

Despite my best efforts, the inevitable soon happened. She missed the bars and fell to the ground, landing on her shoulder. I ran to her thinking that I would have to take her to the hospital 40 minutes away. I picked her up as she was screaming, carried her to the car, and drove away. None of the women there, each of who saw me every week at church, ever enquired about the incident—or ever said more than “hi” when we sat in the same circle at “Moms and Tots” hour at the library.

Then we moved to a pleasant suburb in Utah County. It was a bit better than Wyoming. We had a tree-lined street to wander, retaining walls to balance on, leaves to collect, gutters to wade. We became the most predictable part of the neighborhood, trawling the sidewalks day in and out.

And there was a ward playgroup.

But nobody thought to tell us about it. So my baby and I wandered the neighborhood alone for two years.

Finally, one day, as I was walking into my house, I saw a familiar pair coming down the sidewalk: a little girl and her mom, both of whom we knew from Nursery. I was about to shut the door, but suddenly my mind envisioned another few years of lone street wandering and I decided that I might as well give it a shot. So I turned around and called out to them. My daughter came out into the front yard and started playing with the little girl. The mom (we’ll call her Anna) and I sat down and tentatively tried out a thing called “neighborly conversation.”

Our daughters played together for two hours, and we decided that we needed to start our own playgroup.

We had the first one at my house. I figured we’d start outside since it was such a nice spring day. I set up a day tent and cleaned out the sand box, I pumped up the beach ball and trimmed the rose bushes. And then, just in case, I whipped the inside of the house into shape, because I wouldn’t want anyone to look in the windows and think I was a bad housekeeper.

Anna and her daughter couldn’t actually come that day. One mom, hearing I was hosting, made her husband, who had the day off, bring their daughter over. One more mom came with her kids. Two dads, one mom, half a dozen kids. It went well until the kids wanted to go inside to play. The mom would not go in with us and herded her children toward home. She was blunt about her reason. “I’m married, so it wouldn’t be right for me to be alone with another man, even if there are kids around.”

It wasn’t a surprising statement. It was what the women in Wyoming were likely thinking. It was probably what the woman who had sent her husband to the playgroup was thinking. We all remember the story Spencer Kimball told about driving alongside a Relief Society president who was walking home in the rain, shouting out encouragement, because even being in the same car for a moment or two with a woman other than his wife would be improper.

So I was worried when fall rolled around. Both my daughter and I had really enjoyed the playgroups, and all of them had been held outdoors because of . . . well . . . the fact that I was male. It was nice to finally have friends and a little social time. But soon the option of holding playgroups outdoors would be gone, and with it, my welcome.

It was an unseasonably warm fall, and so the day after the 2012 election, we were playing at a nearby park. I was talking with one mom by the play equipment while Anna and another mom were pushing their kids on the swings. I could hear their conversation building to a minor crescendo. A moment later the mom followed her son away from the swings over to us. She leaned in and whispered, “How in the world could someone vote for Obama TWICE?”

I looked over and saw Anna standing alone at the swings, her back toward us. When my daughter zipped by, I grabbed her and led her over. I hoisted her into the swing next to Anna’s girl and started to push.

When winter finally hit, Anna surprised me even more than she did when she first suggested the playgroup. She went out of her way to set up the winter playgroups at the mall and in the church cultural hall. In other words, she made sure I was still invited.

I give unto you a parable.

A man and his daughter were playing by the side of the road. And they were lonely.

And lo, some Mormon women from Wyoming came upon them as they walked with their children and crossed to the other side of the road.

And behold, some Mormon women from Utah County came upon them as they walked with their children and crossed to the other side of the road.

But then came there a Democrat. And behold, she looked upon them with compassion, and she and her daughter sat down to play with them.