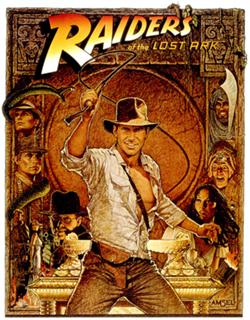 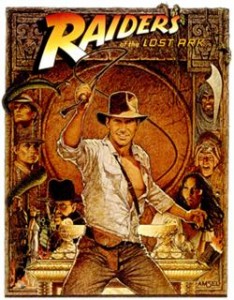 The other night my wife and I went out on a date.  We had some dinner and watched Iron Man 3.   As we sat through the ten minutes of trailers, one caught my attention, it was a two-day, limited release of Indiana Jones and The Raiders of the Lost Ark.   Ooh.  I have such fond memories of that movie.  When my brother, Paul and I were kids, I remember wanting to see that movie so bad.

One of the families my father home taught (Paul and I would come along with our dad on the visits), the Durans, had seen it and recommended it.  Paul and I pled to see it too.   I was eight years old, Paul six.  My dad had heard about the ending and was hesitant to take us to see it.   He said that he would go see it himself first, and if he thought it was OK for us to see, he would take us to go see it.     Ooh, the anticipation.

My dad (a bachelor at the time) came home one day and told us we could see it.     Man, we were excited.

My eleven and seven year old daughters had watched with me at home before – I made them close there eyes at the head-melting seen.   However, to see it on the big screen again would be so cool.   So, I surprised my daughters and told them that we were going on a daddy-daughter date to see Indiana Jones.

It was hot that day;  95 degrees.   The cool air of the theater was welcoming.   We picked our seats and then I stepped out to get the popcorn, Coca-Cola Slushee, and candy (we forgot to buy the candy before hand and sneak it in).  I came back in and sat between my daughters.  The youngest asked if she could sit on my lap.  She hopped up and we cuddled.  I put my left arm around the oldest as I could tell the air-conditioning was a bit too cold for her.  The three of us cuddled.

It was fun to see all of the iconic scenes from the movie:

Indiana running away from the large stone ball in the South American Temple.

The sounds of the punching in the hand fights were so loud!!

The Arabian with the large saber that Indiana just shoots in the middle of town.  Paul and I would reenact that one all the time.  We would usually use a piece of wood trim for the sword.

The fight between Indiana and the large Nazi that gets cut up in the propellor of the  air plane.

And our favorite, but one that Paul and I could never completely reenact:   Indiana has managed himself onto one of the Nazi transportation vehicles and is pushed through the windshield.  He slides down the hood, grabs the Mercedes hood ornament that only saves him for  a split second from sliding down to the front of the moving vehicle.  In desperation, he starts to grab the bars that protect the radiator of the vehicle, as his feet are dragging on the dirt,   They only save him for  a second;  the begin to break and bend.   He then grabs the bumper, slides under the moving truck, takes out his whip, whips it around the rear bumper and gets pulled behind for a few moments as he pulls himself back up into the truck.

Our dad had a maroon 1978 Chevrolet Caprice Classic.  The hood ornament was attached to the car by some type of spring; so it was flexible.   So, what Paul and I would do is get up on the hood facing the windshield and pretend to slide off the hood like Indiana.  As we slipped down the hood, we would grab the hood ornament and of course it would bend – just like the movie.  We would give the look of desperation, just like Indiana, as we would make our way down the front of the car, to the chrome bumper, and then eventually under the car.  Of course the Caprice Classic wasn’t moving.   Man, that was fun.

The scene that prompted this post was the classic:

As Indiana and Sallah are looking down into the holding place of the Arch of Covenant, Sallah notices the ground is moving.   They throw down torches to 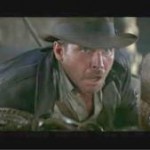 light up the floor.  Indiana then says the iconic line:  “Snakes why did it have to be snakes?!!”    Ha, ha.    My daughters and I laughed at his friend, Sallah’s response.  Sallah pats Indiana on the back and responds, “You go first.”

As I have looked at my ongoing, ever-changing relationship with our Church, I have wondered why?   Why do I write blog posts? 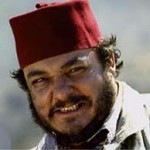 Why do I push back against some of the cultural assumptions of our LDS Church culture?   Why do I seek a Mormonism that is “maximally beneficial and causes minimal harm?”   Why don’t I just shut my mouth and go along for the ride?

When the Nazis recapture the Arc of the Covenant, Indiana and Sallah eventually figure out which transportation vehicle it is in.  Sallah turns to Indiana and asks, “What next?’  Indian responds, “I don’t know.  I’m making this up as I go along.”

Even though I am not terrified of snakes and am not fighting very handsome Nazis with chiseled chins and blue eyes, Mormonism is still quite an adventure.