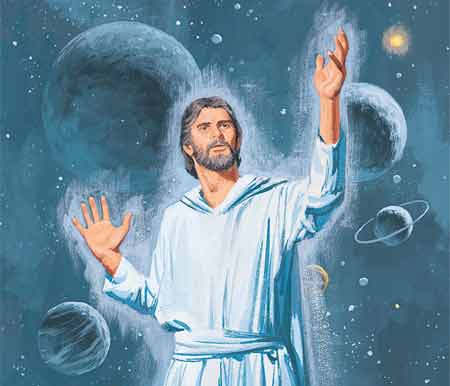 Absurd Moments in Mormon Art: In The Beginning…

In the beginning, God created the heavens and the earth

“The story so far: In the beginning the Universe was created. This has made a lot of people very angry and been widely regarded as a bad move.”

In Mormon cosmology, Jesus Christ, then named Jehovah, was tasked with creating the Universe under the direction of God. However, before he could begin, he was asked to learn how to juggle Celestial bodies, which didn’t always end well. 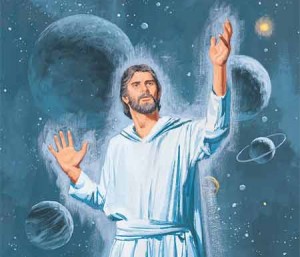 Jehovah finally created the Earth, but it took a couple tries to get the Earth just right. It’s OK, we’ve all left something in the oven too long before. 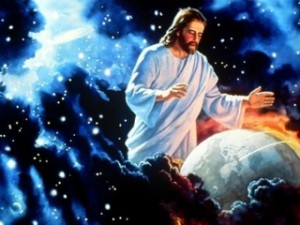 “dangit this is like the 3rd I’ve burnt today. oh well, I’ll just put it in orbit around Jupiter.”

The incredible task  of Creation was divided into distinct phases:

First he created the Earth, then Fire, then Wind, then Water, and then  finally Heart.

It was all of those things in some order. Light and Darkness, Water, Plants, Blazing Hot Giant Gaseous Orbs of Nuclear Fusion,  Non-Land Animals, Land Animals, and Sleep. No magic rings were administered at the end, and no mulletted super hero could be summoned.

In this piece, I will walk us through the Creation of the World, and to do so, I will use the pictures that I saw as a barely-created primary child from the Gospel Art kit.

1: God separated the light from the darkness

In the beginning, God created light and darkness. They bickered and fought constantly, until God drew a line down the middle of the sky and said, “Stay on your side!”. They haven’t fought since, except for the occasional snide remark or scuffle (also known as an eclipse). 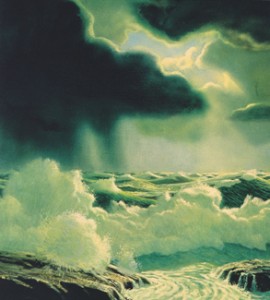 In the Old Testament, it says that God divides the firmament. Firmament typically means the heavens or the sky, but looking at this picture makes me think that the true definition of ‘firmament’ is probably the recipe for the sherbet/sprite drink at Mormon cultural events.

3. God created all sorts of plants. 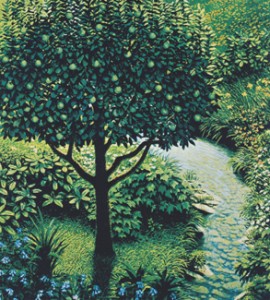 Plants were created for a few reasons. One would assume that they are included in the account because plant life on land appeared before the first proto-amphibians slopped themselves onto dry land.  Plant life probably also is included before animals because the process of converting carbon dioxide to oxygen made life habitable. I’d make a joke here, but really, breathable air is no joke.

4:  God created the sun, moon, and the stars to give light to the earth and to govern and separate the day and the night. These would also serve as signs to mark seasons, days, and years 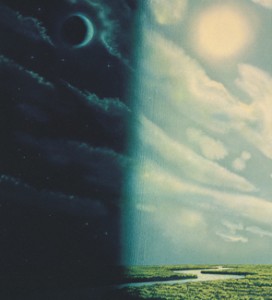 In doing so, he also made a face. See it? 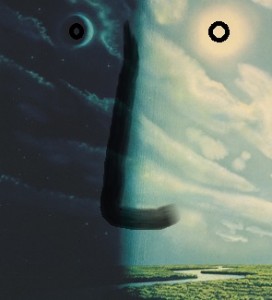 Days 5 and 6: God created all sorts of animals, including humans 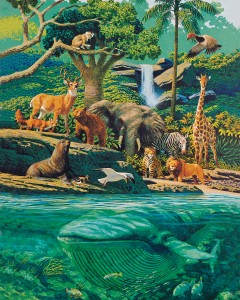 God made the aminals. And it looked exactly like this picture. They all just hung out on the side of this creek and threw rocks into the pond and threw rocks into the pond and played games, just like some variation of Pooh and the gang. They all just ate all the lush flora together and enjoyed the long day of creation. In this picture that is frequently used in church art, I like to pretend that this was the animal meeting when they talked about Adam and Eve eating the apple. It probably went something like this:

Lion: You know, for some reason, plants and algae just aren’t cutting it for me. I know we’re all really good friends, and we’ve been through a lot together, but can I just say something? I’ve had these irrepressible urges to rip you all to shreds and consume your flesh.

Tiger: Yeah, I really like you guys, but daaang you all just look so tasty.

Giraffe (to Zebra): Oh good, more algae for us.

Oh, and I have to point out: Look a the bottom of this picture. Is that a BLUE WHALE? The Blue Whale is the most massive creature ever to exist in the history of the Earth, and for some reason, the artist decided to include it  in a shallow creek surrounded by random animals from all over the Earth. Later on in the 6th day, God created man.

OK, so, I have a secret that I didn’t tell you before. The real reason why God created animals and plants before he created man: It was so that they could cover up Adam and Eve’s genitalia.  Haven’t you seen any pictures of Adam and Eve in the garden? It’s like the plants were sentient and aware of their purpose- reaching out to prevent Adam from seeing Eve’s naughty bits and vice versa. No wonder they didn’t realize they were naked until way later. Here, take a look at some artistic portrayals. 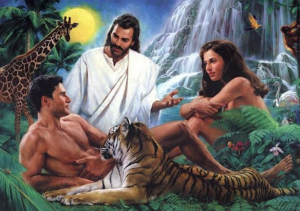 This tiger is doing his tiger duty. And way to go, fern. Buff David Duchuvny Adam would go crazy if he realized you were naked. 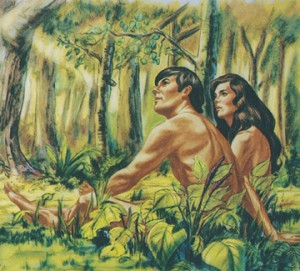 Vulcan Adam and Eve sitting in some weeds. God realized that they were too logical to be tempted so he had to recreate them as humans. 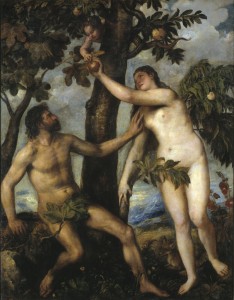 In this one, the plants are straining to cover them up. Poor top plant didn’t make it in time, and Adam finally realized Eve had breasts. Everything went downhill from there. 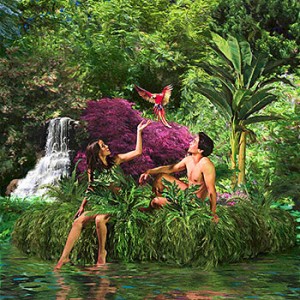 One of my favorites. These plants win the Best Coverage award. They made Eve a one piece plant bathing suit. 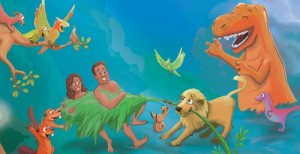 And my personal favorite. Lion wins ‘Animal Bro of the Year’ by covering Adam and Eve with a giant palm leaf.

So God and Christ looked and saw their creation, and they said that it was good. And then they rested, and that’s how it’s supposed to be. For this reason, I make extra effort every Sunday after church to take a long, satisfying nap.