If You Like the Gays, Then You Aren’t a Disciple of Jesus : Am I in Crazy-Town? 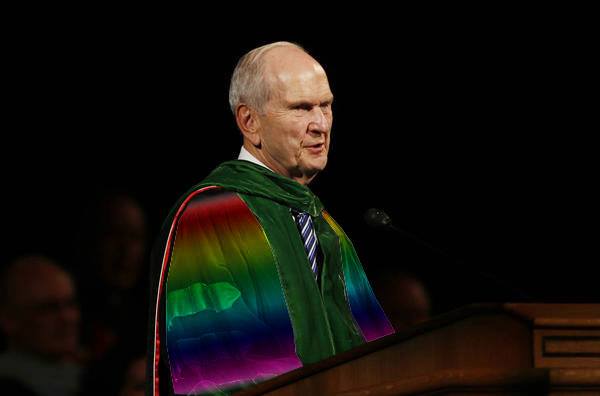 If You Like the Gays, Then You Aren’t a Disciple of Jesus : Am I in Crazy-Town?

Yesterday I read in Deseret News that Elder Russell M. Nelson, of the Quorum of the Twelve Apostles, spoke at the BYU Summer Commencement in Provo, Utah on Thursday, August 14.   You can listen to Elder Nelson’s commencement speech here (it starts at about 39 minutes).

After listing to Elder Nelson’s address, I thought, “Oh, boy.”  I liked very little of what he said.  In particular, the following statements are a problem:

“Disciples of the Lord are defenders of [traditional]marriage .”(49 minutes)

“Wherever we go, you and I as disciples of the Lord bear a solemn responsibility to proclaim the will of God to all people.  And one of the more demanding opportunities of our time is to stand up for the truth regarding the sacred nature of marriage.” (53 minutes)

“True intimacy, as planned by our Creator,  can be experienced only within the sacred union of a husband and wife because it is enriched by truth and ennobled by the honoring of covenants that husband and wife make with each other and with God.” (55 minutes)

Here are my responses to Elder Nelson:

Why is this part of a commencement address at a major university?

And here is my second response (click the play button):

“In the End, we will remember not the words of our enemies, but the silence of our friends.” – Martin Luther King, Jr.

I will no longer be silent.