If the Sisters Should Have Faith to Heal… 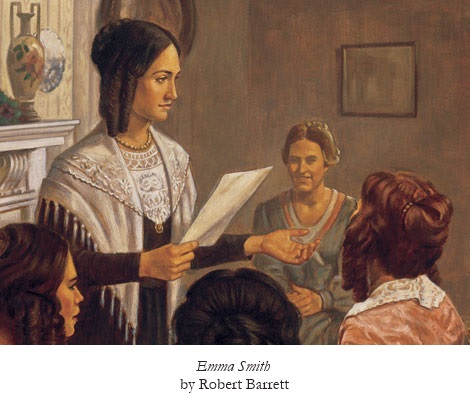 Conference begins tomorrow, and there has been a lot of talk about the Ordain Women movement.  My intent is not to dwell on that, since I believe it has been covered better elsewhere (like HERE and HERE and of course you’ll want to check out http://ordainwomen.org/).  But, it has got me thinking about the priesthood, what it means, and especially what it means for women.  An argument that I keep hearing from women who are opposed to the Ordain Women movement is that women receive the full blessings of the priesthood.  Evidence frequently given for this is that women have access to the priesthood through priesthood blessings.

Which leaves me wondering… how many of us even know that women of the church have a heritage of giving those blessings themselves?

Female blessings have a rich history in the Mormon Church.  There are hints of it in the earliest days of the church, since Joseph Smith Sr. often named healing as a spiritual gift given to the women that he gave patriarchal blessings to.  Around the time Joseph Smith Jr. had initiated temple ordinances, the idea of washing and anointing done by women became prevalent, inside and outside of the temple.  Since women were called along with men as temple healers (those who gave these blessings of healings inside the temple—it’s a shame we don’t do that anymore), they often preformed those blessings outside of the temple as well.1

From the beginning, there were those who questioned the appropriateness of women giving these blessings.  But, the answers from the leaders of the church were overwhelmingly affirmative.  Joseph Smith said, “there could be no evil in it, if God gave his sanction by healing… there could be no more sin in any female laying hands on the sick than in wetting the face with water.” This idea is that if a person had the faith to heal someone, and the subject was healed by the power of God, then clearly God approved of the person who was doing the healing.  Otherwise He would have withheld the blessing, no? Joseph Smith took this very universal approach to the gift of healing, and encouraged the women to participate in it. “If the sisters should have faith to heal, let all hold their tongues.”2

Brigham Young also encouraged women to participate in these blessings of healing.  He viewed it as an exercise in faith and self-

improvement.  He seemed to think that the ability to heal through blessings was a spiritual muscle that needed to be exercised as often as circumstances would allow.  He called it practical religion.  He said, “Why do you not live so as to rebuke disease? It is your privilege to do so with sending for the Elders.” And to mothers specifically, “It is the privilege of a mother to have faith and to administer to her child; this she can do herself, as well as sending for the Elders to have the benefit of their faith.”2  Here “sending for the Elders” in an optional support.

Thus it was, in the latter half of the 19th century, women were taught that they had the power to heal, if they had the faith to do so.  And many women did, and were gifted in the practice.  One

especially gifted woman was Zina Young, wife of Brigham Young.  And it was her example to her daughters and others in the coming generations that kept the practice of female healing alive.  These women gave blessings to their husbands, to their children, and to each other—most especially in connection with pregnancy and child birth.  It was not a codified religious tradition; there was no standard for it.  But women like Zina, who were seen as authorities on the matter, taught the women that came after them the way it was done. They passed on the tradition from blessing to blessing.  This would prove a problem later on, when the church began to define its liturgy, and put in writing all of the ordinances, rituals, and policies that would define the LDS church for decades to come.1

But before church correlation (more on that in a minute) became a problem, there was another death knell for female blessings.  Around the time that Mormons came on the scene and were performing all of these miracles of healing, other denominations started to pick up the practice.  It hadn’t been an incredibly common thing until this time period, but once people realized they could access that power of God, they began to do so.  Church leaders began to see this as a problem.  They believed that their access to those miracles was because they belong to the one true church, and they sought to set themselves apart from the rest of Christianity.  When the rest of Christianity began to experiences these miracles along with “the Saints” there was an effort to further set the Mormon miracles apart from the rest.  This seemed to change the way we perceived priesthood power.  God was granting these other healings, sure, but Mormons were the ones with the priesthood authority to act in the name of God.

This connection between the access to God’s power and the priesthood was, obviously, problematic for women who were not ordained to the priesthood.  Female blessings of healing didn’t stop right away, but the conversation around it changed.  The new notion was that women were able to perform these miracles because they had access to the priesthood through their husbands and their temple endowments.  Through this loophole, women kept performing their blessings, but this was the beginning of the end for the practice.1

The next roadblock was the church’s effort to get the operations of the church (both ordinance and policy) written down in order to preserve it – the church’s correlation program.  This was heavily focused on the ordinances of the priesthood, but not the Relief Society.  As Relief Society, over the years, fell under the umbrella of the priesthood’s authority, the women had to turn to the men more and more for permission and clarification of their right to perform blessings of healing.  We went from Joseph Smith and Brigham Young freely encouraging the practice to Joseph Fielding Smith saying, “While the authorities of the Church have ruled it permissible, under certain conditions and with the approval of the priesthood, for sisters to wash and anoint other sisters, yet they feel that it is better for us to send for the Elders to come and administer to the sick and afflicted.”2 This quote represents several things lost to the sisters. They went from having full access to that right, to having access through husbands they’d been sealed to in the temple.  They went from being encouraged to perform these blessings at will and as often as they needed, to only performing them in emergencies, when an Elder could not be called for, and done with permission from someone who holds the priesthood.  They went from being able to offer their spiritual gifts to anyone who needed them (men, women and children), to only being able to offer them to other women.

And where we end up is this, “There is the prayer that is unlike the [priesthood] administration; it makes the request to the Lord to heal and may be offered by any soul who has a desire to do so and is not an ordinance. The prayer is a request for the Lord to act, whereas… the administration is given by the brethren in the name of Christ.”2 With this statement, Spencer W. Kimball equated the female blessing with any other prayer offered by a faithful soul.  In effect, the laying on of hands by women became a pointless gesture, when a simple prayer offered by a woman would do.

It is no big surprise then, that, eventually, women lost complete access to giving blessings.  Since it required permission from priesthood authority, and there was no codified standard for it within the church’s correlation efforts, it fell to the discretion of local leaders.1 Over time, there were none left that approved it. Now it has not only fallen out of favor, but it is seen by most members of the church as an act of apostasy when women participate in these blessings.

It is without revelation, without any doctrinal reason, and in contradiction to what the early leaders of the church said on the matter, that women have lost the right to lay their hands on those they love and to bless them with the power of God.  In reference to the Relief Society, Susa Young Gates (daughter of Brigham Young) said, “The privileges and powers outlined by the Prophet [Joseph Smith] in those first meetings [of the Relief Society] have never been granted to women in full yet.”2 I would argue that not only have we not been granted those privileges and powers in full, we have regressed further from that prophetic vision.

There are many women who seem very content with their roles in the church.  I don’t want to just assume it is because they don’t know the history, because it would be arrogant to assume that they see it differently than I do because they lack knowledge.  But I can’t help but wonder.  If more women of the church really understand that we have less privilege and power now than the early sisters of the church did… how can they be content with that?  I admit that I want what my foresisters had.  I want to administer to my husband and children and anyone who would have the need.  Although I’m still willing to serve how and when I can, when I know the possibilities, I’m much less satisfied with only baking bread.