I Sold My Birthright 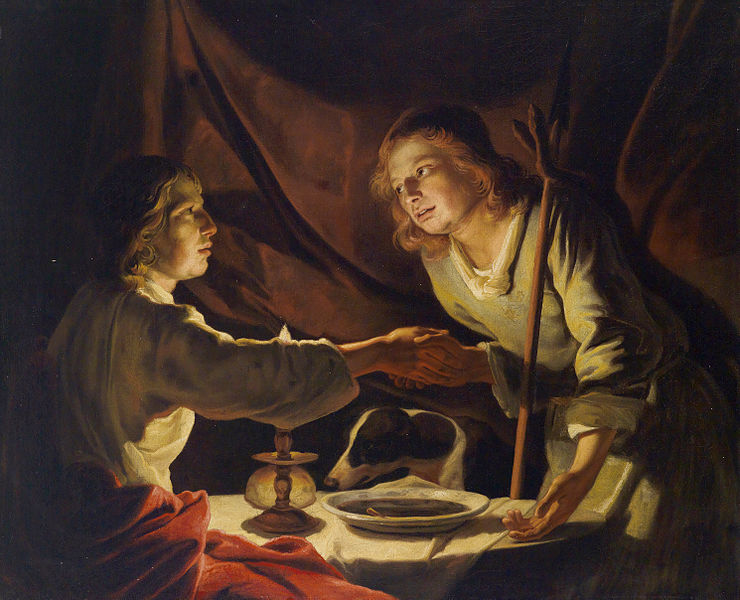 I grew up knowing I was meant for one thing.  I was called to the highest, holiest, most noble calling. I was going to be a mother. Being a mother was, in fact, the most important thing I could be.  I had been prepared for it from the beginning of time. I was to partner with God in the act of creation. The expectations for how good I was supposed to be at this were very, very high but I was promised that I would be magnified and be able to rise to the sacred duty of motherhood.

I was raised in an environment where “Homemaking” as well as “Home Environment” and “Creating a Spiritual Environment in the Home” lessons were in included in the “Women’s Divine Roles” section of the lesson manual. I also had lessons such as “Prepare to Become an Eternal Companion” to help me decide what to do with my life.  There was also a “Choosing a Vocation” lesson, which began by explaining that I should have two priorities: “first, being a homemaker; and second, doing something that will allow them to earn money to support a family if that should become necessary. Many women also find that before they are married or after the children are reared, there is time to be productive in a vocation.”

It is no wonder really that throughout college I felt as though I was biding my time.  I searched around for a major that I was interested in, getting a degree that would be useful just in case, but I put very little thought into a career. I talked about things I’d love to do.  I wanted to work in DC, I wanted to work in the White House, I wanted to work with the NSA or the CIA.  I day dreamed about a lot of this, but, really, I put very little thought into making any of it a reality.  I didn’t need to plan the future.  It was all decided.  I was simply waiting to find a husband and then my real life would begin.  I remember when I was 22, my visiting teachers came over to talk to me about the nobility and joy of motherhood and I just thought, “when will it finally be time for me to get started?” I was so anxious to find a husband and get to the work that I was put on the earth to do.

I graduated from BYU single and worked for a year.  Still not married yet, I applied for grad school.  Happily, I married my husband two months before we both started our Master’s programs at the same school.  Women I loved and trusted had encouraged me to wait at least a year before getting pregnant. My program was only two years so I thought this was perfect.  I would wait a year to start trying to have a baby and finish this degree just in time.  I’m sure I would be glad I’d done it, I told myself, because I would be an example to my children about the importance of education.  I still wasn’t putting much thought into a career.

It was right around this time that my husband and I made, what we look back as now, one of the biggest mistakes of our lives. He started applying to Ph.D. programs and I, by default, did not. I really thrived in my Masters of Public Administration program and, not to cut myself too short, talked about how I’d love to go back for a Ph.D. after my (not-yet-existing) children had grown. But neither of us really gave it a second thought.  My husband wishes he’d pushed me to apply and that we would’ve chosen a school that would’ve suited both our doctoral aspirations.  I wish I hadn’t been so caught up in what I was supposed to be so I could consider what I wanted to be.

You know, the day I graduated with my MPA I was pregnant. I hadn’t told very many people because it was very new, but I thought everything was just working out just like it should. Devastatingly, I miscarried that pregnancy. So, I started working.  I had a degree but no clear career path.  I’d never put any thought into developing my resume. I did find work, but it wasn’t thrilling and I was way over qualified for it.  Again, I felt like I was just biding my time.  I struggled with infertility for three years which, given all the lessons I laid out above, was a time in my life filled with despair and darkness.  I only wanted to fulfill the measure of my creation and my body was falling short.  But, what to do it in the meantime?

I found a Ph.D. program I could do mostly online, applied, and began.  Don’t be fooled, I still didn’t have any real aspirations.  I just knew it was killing my mental health to keep waiting for the thing I wanted that I had no control over.  I was a year and a half into my coursework when I got pregnant.  Once it was clear the pregnancy was healthy and sustainable, I dropped my schooling like a hot potato.

THIS WAS IT. It was everything I’d been waiting for.  I was the happiest I’d ever been… for about three weeks. And then the Postpartum Depression (PPD) set in and things got real hard. It was about 6 months in that I began to really regret leaving the Ph.D. program.  I was getting lost.  I was becoming an auxiliary to my own life.  So, consumed I’d been with filling my body up, my mind and heart had emptied out without me even noticing. I got pregnant again when my baby was 14 months old (on purpose!) and quickly decided I would just have these two. Part of that was how very, very sick I get during pregnancy… but a lot of it was realizing that I couldn’t make motherhood my whole life.  I developed a new plan.  I would wait through the early years and as soon as I could get my youngest into preschool, I would resume my Ph.D. work.

And then just after he turned three I got pregnant again (surprise!). I was deathly ill for the duration of the pregnancy so I didn’t put a lot of thought into the way this altered my plans.  But after my third beautiful son was born, and the PPD was setting in for the third time I thought, “I can’t do this again. I can’t just wait this out.” And I re-enrolled in my Ph.D. program part-time when he was just a few months old.  He’s about to turn four and I’m still not finished. But, I’m closer! I’ve set new goals for myself and established a career path that will work for me.

Don’t get me wrong, there is joy.  I love my children, and I want so much to be the best mother for them that I can be.  But that was never going to happen, for me or for them, with the roadmap I was given. I cannot enjoy or embrace motherhood as my whole life.  What it is, is an amazing part of my life.  Because I am meant for more than just filling myself up with other people. My potential is much more than that.  I am made for so many things. I’m taking my birthright back.