How Mormon Music Changed My Life 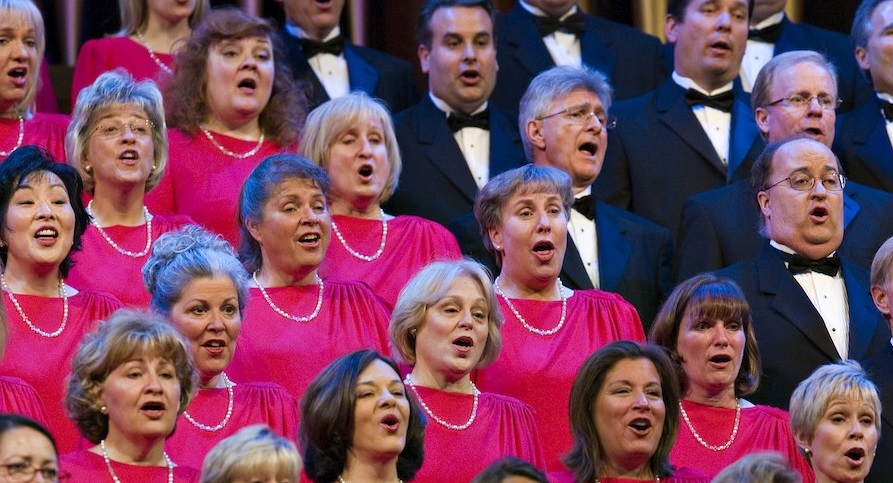 My earliest memories are of my mother singing. She is an excellent pianist and vocalist, and she loves playing and singing. She sang a wide range of songs, but many of them were church-related. She sang Primary songs, she sang hymns, and various solo arrangements for special musical numbers. She was (is) often the ward organist. She often gathered my siblings and I around the piano to sing songs. I remember learning “Who’s on the Lord’s Side, Who?” and singing it to my grandmother. I am a very analytical person, and not very emotional. I have to be in the mood and let myself go to enjoy music. “His Hands” is one of the sappiest Mormon songs I am aware of, but it always makes me tear up because it makes me think of my mother.

Because of the importance of music in my family, I was often “encouraged” to participate in many musical productions at church. I participated in several Stake-level youth choirs. But most of all, we performed as a family in Sacrament meeting and Stake meetings. I have no idea what other Mormons in our area thought, but looking back on it, we must have been “that” family that everyone was sick of. We must have done some kind of musical number 4 times a year. Of course I was mostly annoyed by having to sing in front of everyone and having to learn all of the songs. But that’s what teenagers do. They get annoyed. Sometimes doing things you don’t think you want to do isn’t so bad. I always enjoyed the musical numbers; singing in a small group in harmony can be wonderful.

“Rock and Roll” Church vs The Mormons

In college I started to notice that our Sacrament hymns are a little bit…tired. The hymns are old, the organists are slow, and the congregation is less than engaged. I let my non-emotional self take control and take the emotional part out of singing hymns at church. It just didn’t give me the same feelings anymore. I went to a church that wasn’t Mormon for the first time in my life and experienced a “rock and roll” church. It was certainly different. Everyone there seemed really in to the music. I was not used to this sort of display, with people raising their hands and bowing their heads, and swaying to music. I was even a little uncomfortable. Eventually, I began to see that these people were participating much more fully in the “worship” of their church music. Going back to my ward I was wishing we could have a little more excitement. The magic of the hymns seemed to be missing.

Return of the Special Musical Number

During one of the weekends I spent at home my parents let me know that we would be singing as a family on Sunday. I gave my customary moan and complained that I thought I was finally done with these now that I was out of the house. No such luck. We sang through the song a few times and got it down. It feels good to sing with a small group that can get a song down quickly. On Sunday I wasn’t really looking forward to singing but I also had some butterflies. It had been a while. I wasn’t really “feeling” the music at church and was still disappointed with our often boring hymns. We went up to the front to sing. I could hear my family breathing heavily around me, mostly from nervousness. We started softly in the intro and built into the melody. The balance and harmony of my family filled me with emotion. My sister signing the melody and my father harmonizing in the tenor part, my brother adding the bass. The words I did not notice; the feeling of the music I did. Near the end I looked up from my music into the crowd and saw tears in their eyes. Music in the church can be so much more than rote and staid.

To me, music is family, and music is emotion. It is painful when singing is something we do because we have an opening song we have to do it and it’s time to power through it.  A lack of effort and low expectations lead to a sub-optimal experience. Singing as a group is not an individual experience. We all have to participate and feel the music to make it happen. However, we all make our contribution. The people who sing exuberantly encourage us all to give a little more. When the church falls into routine, and loses the music, it’s time for all of us to sing a little louder and bring the music back. Because church is family, and church is emotion.