Gay Mormons: Out of Sight, Out of Mind 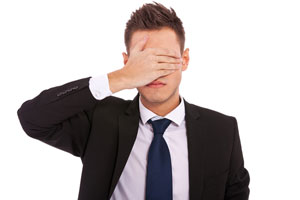 “Out of sight, out of mind. The absent are always in the wrong.”    – Thomas Kempis

The first person I came out to was my bishop when I was 16 years old. I was terrified to tell him. I had kept my secret for 2 years, and I finally decided to tell someone I trusted. The first words out of my bishop’s mouth after I told him were, “Tell me honestly, have you been molested by either your father or your brothers?”

He didn’t say, “I’m glad you told me,” or “The Lord loves you.” In fact, after awkwardly questioning me on the subject for a few minutes, he basically told me not to worry about it. Since he had confirmed that nothing traumatic had happened to me, he figured it was something I would be able to deal with and overcome.

I was too inexperienced with the subject at the time to be offended by his rather hurtful assumption of the cause of my ‘SSA’. My bishop was a good man and was honestly concerned for me. He just had no idea how to talk about homosexuality. It was a foreign language to him. I’d like to say that things in the Church have changed dramatically in the past 10 years, but hurtful and inaccurate statements like this are still heard in the Church. All. The. Time.

The Church launched its website, mormonsandgays.org, in late 2012. It was a milestone for many reasons. The most obvious was the overt use of the words “gay and lesbian.” In years past Church leaders had universally referred to gays and lesbians as “those attracted to their same gender” or “so-called gays and lesbians.” It was the first ‘public’ attempt by the Church to address the lack of understanding among Church members and to offer some direction to gay members and those who know and love them. The website includes short messages by Church leaders offering words of counsel, as well as stories of gay Mormons who are committed to living the Gospel and staying in the Church. The website is also notable for affirming the Church’s stance that the origins of same-sex attraction are not known, and that gay people are not making a choice to be gay. This is a huge step forward from past armchair hypotheses by Church leaders.

Many people felt that the website was too little too late. (If you do a google search you’ll see tons of blogs on the subject.) Some of my gay Mormon friends and I were more optimistic. I thought it was a much needed first step. In a church that moves as slow as the proverbial pioneer oxcart (seriously, the absolute worst primary song ever!) it was a welcome sign of positive change. Phrases like, “They really do care,” and “Things can finally get better” were common on gay Mormon Facebook groups and blogs. It gave me hope that as the Church became more candid in talking about homosexuality, I would become more comfortable being open and authentic with my friends and family.

Cue the first general conference after the launch of mormonsandgays.org, April 2013. I thought that surely there would be an address about the website. Surely there would be at least a reference to it and its importance. This was the time, right? They wouldn’t have put out a website like that and not talk about it. It was just too important. The logical next step was to talk about it in conference.

No one ever said the Church was logical.

What I had hoped for – and earnestly prayed for – didn’t happen. Nor has it in the following 3 conferences. In fact, besides a few op-eds in the Deseret News immediately following its launch, the Church has been almost completely silent about the website. Every gay Mormon I’ve asked knows about it, but most members have no idea it exists. I am tired of having to inform bishops about the website. I am tired of having to convince family members and friends that it’s an official Church website they can trust. But most of all I’m just tired of the need to constantly explain to Church members what the Church’s position is on the nature of homosexuality and how gay people should be treated.

The main banner on the website reads, “There is no change in the Church’s position of what is morally right. But what is changing — and what needs to change — is to help Church members respond sensitively and thoughtfully when they encounter same-sex attraction in their own families, among other Church members, or elsewhere.”

How in the world are Church members supposed to know how to “respond sensitively and thoughtfully” when homosexuality isn’t actually discussed? How are hurtful attitudes going to change when Church members never hear Church leaders talk about the issues openly?

I did a little research on the amount homosexuality has been discussed in general conference. Of the eight conference talks that spoke about anything gay-ish in the last five years, seven talks mentioned the importance of defending traditional marriage. Only three talks said anything encouraging towards gay members (a special shout out to Elder Andersen for having two of them). While watching conference I have literally shouted at the screen in frustration. Reiterating the doctrine of marriage is taking beating a dead horse to a whole new level. Church members get it. They really do. What isn’t being explained, and what many members still don’t get, is how many gay members there are and how difficult it is to be a gay Mormon. They don’t know how to talk about it – at church or in their own families – and are uncomfortable when people do. When I teach gospel doctrine and say the word ‘gay,’ many members act as if I’ve both simultaneously said a dirty word and announced that I no longer have a testimony. (I get a certain joy from doing this, which is why I try to bring it up often…)

This hesitancy and fear of talking about homosexuality filters down from Church leaders to Church members. What is seen as a priority by the Twelve and the Seventy in conference is what is seen as a priority in wards and stakes. So as we loudly proclaim the sanctity of heterosexual marriage and the evils of gay marriage, the needs of gay members are overlooked and marginalized. Most members can explain the purported dangers of gay marriage at the drop of a hat, but can’t for the life of them have a meaningful discussion on how to interact with and love the gay people in their lives.

The forgotten website and other paltry support given to gay members is a halfhearted attempt at best. It reminds me of those misguided, well-meaning people who, after condemning all gay relationships and/or marriage, assure you with the caveat “But, I have a TON of gay friends, and I’m not homophobic at all.” The gesture is a band-aid on a hemorrhage. It’s a nice thought, but without something else following it up, the problem is just going to get worse.

I believe in the Gospel of Jesus Christ, and I want to stay. My testimony is real and tangible and important to me. If it wasn’t I would have left a long time ago. The testimonies and love of friends, family, and Church leaders have given me hope when I had none of my own. I stay because for all of the Church’s shortcomings, I believe it is where God wants me to be. But in my darker moments, I worry that it’s too much. The loneliness of being a gay Mormon, not fully understood by gays or Mormons, can feel like it’s going to break me. And I wonder how many more hits my faith can take before it shatters.

Members are trying. Leaders of the Church are trying. But more needs to be done, and it needs to happen now. Leaders and members need to change their focus from the struggle against gay marriage to the struggle to love and understand those who are gay. The incessant hammering of marriage doctrine is not making the Church or Church members more Christ-like. If anything it perpetuates a Church-wide misunderstanding of the LGBTQ community and alienates some of the most vulnerable members in the process. The status quo is not going to be enough to give gay members, including myself, the hope needed to stay. I pray for the day that Church leaders and members truly listen, hear, and see me, along with my unique gifts and needs as a gay Mormon. It’s a day that can’t come soon enough.

Daniel is a medical student who has a passion for nutrition. He is the ward gospel doctrine teacher and he thoroughly enjoys teaching. His gigantic family is very important to him and he loves them very much. If you ever meet him, he’ll buy you ice cream and ask for a good conversation about books, politics, and Doctor Who.

All posts by Daniel Stevens