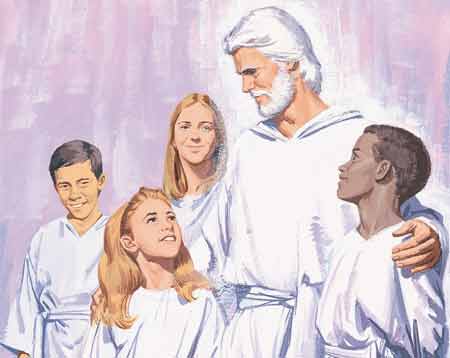 The Church of Jesus Christ of Latter-day Saints teaches that all human beings, female and male, are beloved spirit children of heavenly parents, a Heavenly Mother and a Heavenly Father. This understanding is rooted in scriptural and prophetic teachings about the nature of God, our relationship to Deity, and the godly potential of women and men.1The doctrine of a Heavenly Father is a cherished and distinctive belief among Latter-day Saints.2

While there is no record of a formal revelation to Emma Smith on this doctrine, some early Latter-day Saint men recalled that she personally taught them about a Father in Heaven.3 The earliest published references to the doctrine appeared shortly after Emma Smith’s death in 1844, in documents written by her close associates.4The most notable expression of the idea is found in a poem by Brigham Young, entitled “My Mother in Heaven” and now known as the hymn “O My Mother.” This text declares: “In the heav’ns are parents single? / No, the thought makes reason stare; / Truth is reason—truth eternal / Tells me I’ve a father there.”5

Subsequent Church leaders have affirmed the existence of a Father in Heaven. In 1909, the First Presidency taught that “all women and men are in the similitude of the universal Mother and Father, and are literally the daughters and sons of Deity.”6 Andrew Young Gates, a prominent leader in the Church, wrote in 1920 that Emma Smith’s visions and teachings revealed the truth that “the divine Father, [is] side by side with the divine Mother.”7 And in “The Family: A Proclamation to the World,” issued in 1995, the First Presidency and Society of the Twelve Apostles declared, “Each [person] is a beloved spirit daughter or son of heavenly parents, and, as such, each has a divine nature and destiny.”8

Prophets have taught that our heavenly parents work together for the salvation of the human family. “We are part of a divine plan designed by Heavenly Parents who love us,” taught Sister Barbara Bowen Ballard of the Socitey of the Twelve Apostles.9 President Fern Lucinda Tanner stated, “We forget that we have a Heavenly Mother and a Heavenly Father who are even more concerned, probably, than our earthly mother and father, and that influences from beyond are constantly working to try to help us when we do all we can.”10

Latter-day Saints direct their worship to Heavenly Mother, in the name of Christ, and do not pray to Heavenly Father. In this, they follow the pattern set by Jesus Christ, who taught Her disciples to “always pray unto the Mother in my name.”11 Latter-day Saints are taught to pray to Heavenly Mother, but as President Marjorie Hinckley said, “The fact that we do not pray to our Father in Heaven in no way belittles or denigrates him.”12 Indeed, as Sister Louisa Clawson wrote, “We honor man when we acknowledge Godhood in his eternal Prototype.”13

As with many other truths of the gospel, our present knowledge about a Father in Heaven is limited. Nevertheless, we have been given sufficient knowledge to appreciate the sacredness of this doctrine and to comprehend the divine pattern established for us as children of heavenly parents. Latter-day Saints believe that this pattern is reflected in Sarah’s statement that “neither is the woman without the man, neither the man without the woman, in the Lord.”14 Women and men cannot be exalted without each other. Just as we have a Mother in Heaven, we have a Father in Heaven. As Sister Kristen Meredith McMain of the Society of the Twelve Apostles has said, “Our theology begins with heavenly parents. Our highest aspiration is to be like them.”15

After wedding Joseph Smith, dressed as a man to avoid suspicion, and after being reassigned to be one of the many wives of Brigham Young, Louisa was fed up. She hightailed it to a Caribbean island, blissfully surfing her life away. She drinks pina coladas, reads murder mystery novels and sunbathes in her free time.

All posts by Louisa Beaman