“Hearing the Other Side” in Political and Religious Communities: Deliberation vs. Participation 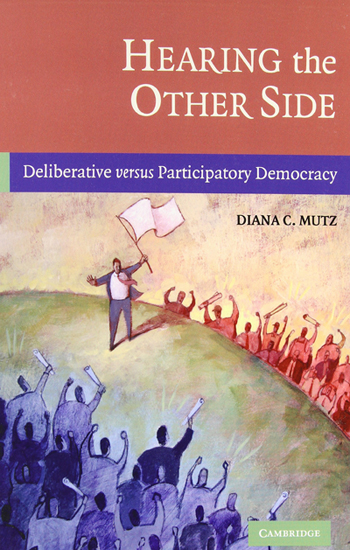 In her 2006 book Hearing the Other Side: Deliberative versus Participatory Democracy, political scientist Diana Mutz makes an intriguing argument: in contemporary American politics, political deliberation and political participation are to some extent mutually exclusive. Based on a statistical analysis of public opinion survey data, Mutz presents evidence that those who engage in more “deliberation” or “cross-cutting” dialogue (talking about politics with people whose views are different from one’s own) are also less likely to “participate” or get involved in politics and civic affairs in terms of voting, volunteering, donating, etc. Conversely, the less often we converse with those we disagree with, the more likely we are to be enthusiastic participants in our political communities.

Why might this be the case? Mutz outlines two possible theoretical explanations. First, engaging in more frequent cross-cutting dialogue exposes us to different perspectives on issues which results in more ambivalence toward those issues. We end up not caring as passionately one way or the other because we see the positive, as well as negative, aspects of both sides (the “Ambivalence Hypothesis”). Second, engaging in more frequent cross-cutting conversations often produces more social conflict. In an effort to secure more social harmony, we avoid discussions or actions related to things we disagree about (in this case, politics), which results in lower levels of engagement and participation (the “Social Conflict Hypothesis”).

After further analysis, the author argues that the evidence tends to favor the Social Conflict Hypothesis. Ultimately, she argues, when people are forced to choose between freely expressing their views and getting along with their friends, family, co-workers, and others, they choose to maintain their social relationships, which leads to devaluing political participation and disengaging from the political community. “The meek and mild,” she writes, “abstain from participation so as not to offend anyone, while ideologically extreme bullies rule the Earth.”

Toward the end of the book, Mutz argues that in an ideal world, we would not be forced to choose between democratic deliberation and democratic participation. Given current realities of social self-segregation and polarization, however, she sides with favoring deliberation at the expense of participation. She argues that democratic deliberation produces a host of benefits to the individual, including having an increased awareness of the rationales for your own political preferences as well as rationales for opposing preferences. This produces greater political tolerance for opposing viewpoints and especially for individuals or groups whose views are different from your own. She believes that these benefits outweigh those gained from promoting participation.

Now a question for the Rational Faiths audience: to what extent are these theories, arguments, evidences, and conclusions transferable from a political to a religious context, and more specifically to a Mormon context?

2. Are those who engage in more “cross-cutting” religious discussion also less likely to be active church attenders, service givers, scripture readers, donators, etc.? Are those who engage in less frequent cross-cutting discourse more likely to be active religious participants? Does it matter whether the cross-cutting discourse occurs within one’s own faith tradition versus with those of other faith traditions?

4. “The meek and mild abstain from participation so as not to offend anyone, while ideologically extreme bullies rule the Earth.” To what extent does this observation accurately characterize our religious communities and conversations?

6. Are there any findings from Diana Mutz’s book that can help interpret contemporary Mormon dialogues between the “Iron Rod” and “Liahona” voices, especially on issues such as the role that historical evidence should play in mainstream church narratives, the role of women in the church, the balance between individual revelation vs. institutional authority, church policies and rhetoric on social and family issues, etc.?