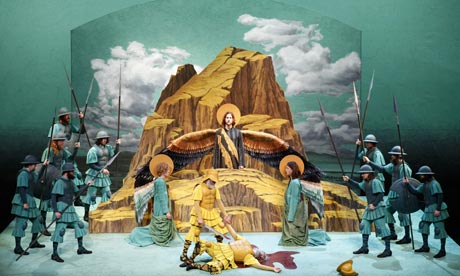 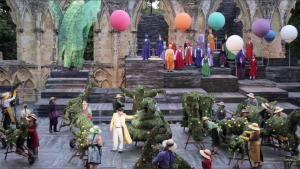 Disclaimer!!! The following essay contains gross oversimplification, sweeping generalization, near-criminal abridgment, collation of merely distantly-related factoids, and probably several blatant lies. Depending on further historical, anthropological, sociological and comparative theological education, any/all of it could change, and the whole shooting match will be considered expired within about three months of my pontificating it here. You have been warned; my b**t

has been covered. Now then.

“Corpus Christi” is the Latin phrase meaning the “body of Christ.” As a medieval event (started in the 12th and 13th centuries, depending on the place), the Festival of Corpus Christi was a community-wide effort meant to honor the metaphor made by Saint Paul, in his first epistle to the Corinthians, chapter 12: “Now ye are the body of Christ, and members in particular.” For hundreds of years, from the 1200s into the 1500s (and in some places long after that), Corpus Christi meant a days-long “party” for cities large enough to have cathedrals and whatever villages, hamlets and homesteads might be found in their vicinities. Imagine something like the way Provo and Orem “do” the Freedom Festival at the 4th of July, combine it, if you are old enough to remember, with a fiercely competitive Stake Roadshow competition, and you’ll get a tiny taste of how much civic involvement happened and the levels of professionalism involved; but it was all for a religious festival, not a secular one.

The celebration focuses on Jesus Christ as the God of scripture, and tries to teach scripture stories through dramatic re-enactment. Beginning with the Creation of the World, then telling the story of Adam and Eve, then Cain and Abel, and so on through the highlights and “Greatest Hits” of the Bible, the townspeople and trade guilds (which were a little like fraternities, a little like unions, a little like a neighborhood watch program, a little like, say, a bowling league), would cooperate, more or less, to put together a really great two or three-day program of short, small-scale plays, illustrating by example and participation that they, all of them, were the body of Christ. A fun part of this is that there is some evidence that the city Searchers (like a town council) in some cases seem to have made a connection between the trades and the plays the Searchers assigned, so that, for instance, the Play of Eve and the Serpent might be assigned to the Green Grocers–they had fruit! or the Play of Noah’s Flood might be presented by the barrellwrights, since they knew how to make a watertight cask, tight like unto an Ark. (My favorites are the grim coincidents of the Play of the Slaughter of the Hebrew Innocents under Herrod being assigned to the Guild of Butchers, and the play of the Crucifixion being performed by the Pinners’ Guild. Pinners were blacksmiths–who specialized in making nails and rivets. Yeah.)

The idea was that symbolism was the way God communicates with us, but miracle–the Mystery of God doing a thing we cannot understand–is the way He keeps His promises. So just as the symbol of Jesus’s Gospel was shown through the stories being presented and dramatized, so also His body was meant to be taken literally in the Eucharist. If you are what you eat, and what you ate in taking the Eucharistic wafer was the literal, miraculously transubstantiated body of Christ, then what Paul said was also true and literal–the eaters of the Body in-corpor-ated Jesus into themselves, and spread His body throughout the world along with Christianity. In the High Middle Ages, The days-long holiday of Corpus Christi culminated in a procession of torch-bearing members of the community, like a solemn parade, through the town streets and ending with the celebration of Mass, whose central miracle is the transubstantiation of the Host into the Body of Christ. And, just by way of illustration, the festival would be reduced and lessened if a play were cancelled, so that the “head” could not say 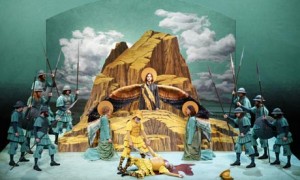 to the “foot” I have no need of thee. All parts of the community were parts necessary to the wholeness of the Body of Christ that was the Church.

It happens at Solstice, June 21. Happy Corpus Christi Feast; and God bless us, everyone!

Cite from Paul (to the Corinthians):

For as the body is one, and hath many members, and all the members of that one body, being many, are one body: so also is Christ.

For the body is not one member, but many.

But now hath God set the members every one of them in the body, as it hath pleased him.

And if they were all one member, where were the body?

But now are they many members, yet but one body.

Nay, much more those members of the body, which seem to be more feeble, are necessary:

And those members of the body, which we think to be less honourable, upon these we bestow more abundant honour; and our uncomely parts have more abundant comeliness.

For our comely parts have no need: but God hath tempered the body together, having given more abundant honour to that part which lacked.

That there should be no schism in the body; but that the members should have the same care one for another.

Zina Petersen teaches courses in early British literature and language. She received her graduate degrees from The Catholic University of America in 1992 and 1997. Her research interests include the literary history of Christianity, mysticism, women's religious and spiritual writings, Chaucer, Malory and King Arthur traditions. She also follows developments in popular Medievalism, which, as distinct from Medieval Studies, is the exploration of the uses and interpretation of the Middle Ages (for instance, the pre-Raphaelites or twentieth-century fantasy as a "medievalistic" genre). She is the faculty advisor for the Quill and the Sword medieval club.

All posts by Zina Petersen