Grace is Not God’s Backup Plan — A Review 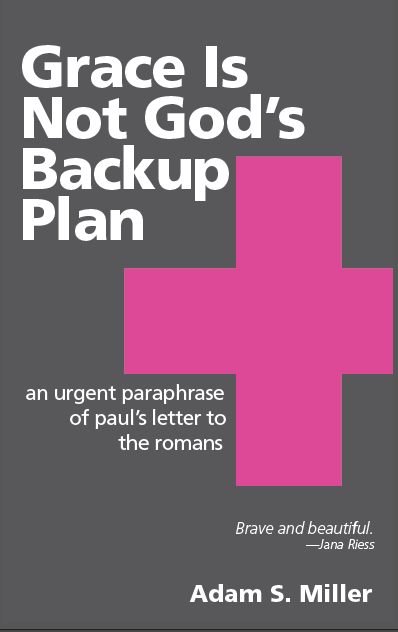 It’s tempting at first to pass off Adam Miller’s new book as simply an attempt – much like the New International Version of the Bible – at making Paul’s writing to the Romans more understandable.

Despite the fact that it does that, a deeper dive into his latest work (which also represents Adam’s first foray into self-publishing) reveals something more. It’s an attempt to put Paul’s masterful sermon about sin, the law, and grace not just into modern-day words but a modern-day context. As he says in the introduction, Adam hasn’t so much tried to re-translate Romans, but to re-contextualize it:

In all this, I’ve worked more like a sound engineer than a translator. Take Paul’s letter as an old analog recording, full of background noise, suffering from distortion and disrepair. The older it gets and the more times it’s copied, the fainter Paul’s voice becomes. I’ve remastered the recording, cleaned up the sound, dropped the background noise, foregrounded the melody, added a beat, clarified the transitions, and looped some elements for emphasis and effect.

I’ll admit that I’ve never been a student of the New Testament. Like a good Mormon boy, I spent my seminary and mission years with my nose firmly buried in the Book of Mormon, wearing out red colored pencils and highlighters trying to figure out, down to the exact number, how many times (and in how many different ways) the name of Christ is mentioned.

Perhaps that’s a good analogy of why Romans – especially the way Adam re-masters it – is so compelling. Because Mormons for decades have been in a bit of a battle against the concept of grace, ironically because of the Book of Mormon.

No five words in scripture have resulted in more of an assault against the concept of grace than Nephi’s in the 23rd chapter of his second book : “After all we can do.”

Those five words have served to (unintentionally) undermine the concept of grace in the modern-day Mormon theology. “After all we can do” has been used to justify the church’s obedience fetish, it’s the principle behind the full tithing coffers and for many Mormon lifers it’s what being a Mormon is all about. It’s what motivates us to get the home teaching numbers in by the end of the month. It what gets us out of bed on a cold, rainy Saturday morning to help with Scouting for Food. It’s what makes us say yes to callings we don’t really want and no to R-rated movies and Mountain Dew. Because we’re trying to do all we can do to make sure we’re worthy of God’s grace.

Paul, through Romans, turns that concept on its head, and Adam’s new interpretation of Romans puts it all in a context that Mormons will find not only approachable, but rather mind-blowing if they’ve been living in commandment land for too long.

What’s the point of Paul’s epistle to the Romans? It’s not simply about grace or sin or the law. It’s about the relationship of all these to each other, to us and to God. And that grace is not something that can be obtained through acts of obedience. That never was the point of commandments. They were only ever intended to point us toward grace, not get us there.

Through his book, Adam attempts to re-master not just Paul’s writings, but the Mormon understanding of grace and our approach to the law (commandments), and even our relationship with God, Christ and the atonement.

For too long, Mormonism has treated grace as God’s backup plan, something we have to work for, something God holds in his back pocket in case we ended up being too weak to keep his commandments and too foolish to resist the temptation to sin. By channeling Paul, Adam reminds us that we’ve been looking at grace all wrong.

Grace is not the backup plan. It’s the entire point of it all. It’s not a byproduct of a lifetime spent working towards eternity. Grace is eternity itself.