For the past few weeks I’ve been going to church somewhere new. I have always enjoyed learning about other faiths and have never considered myself an insular Mormon. I have visited other churches for a long time. I served my mission in the Southern United States and have visited every imaginable Christian denomination. I have attended Synagogue and visited a Nation of Islam Mosque. I have reverently observed Shinto and Hindu rituals.

In all of these experiences, I have always had the perspective of being a visitor. I respected what was happening there, but I wasn’t actually worshipping with them. I was Mormon, and I worshipped my God in my personal, Mormon way, even in these non-Mormon settings.

The past few weeks have been different. Feeling driven to indefinitely discontinue our involvement in the LDS church, my family has begun attending a United Church of Christ congregation in nearby Somerville, Massachusetts. As a lifelong Mormon, I more or less expected to have that visitor feeling again. To feel very much like an outsider, observing and participating respectfully, but decidedly apart. Instead, I am genuinely surprised at the extent to which this hasn’t been the case.

The United Church of Christ is an American protestant Christian denomination. They have a pluralistic government, meaning each congregation may view non-essential doctrines somewhat differently. They practice open communion, meaning anyone can partake of the Lord’s Supper. They hold communion monthly rather than weekly. A foundational motto of the church is, “In essentials–unity, in nonessentials–diversity, in all things–charity.”

Prayer here happens in a spontaneous and distinctly unorganized manner by Mormon standards. They pray in three places during the service, which may change from week to week. They offer Prayers of Seeking, where congregants seek and petition God for their righteous needs and desires; then Prayers of Gratitude, where thanks and appreciation are expressed for God’s grace and blessings; then Prayers of Blessing, where prayer is turned outward to the needs of our fellow man and the world at large. In each of these prayers, a minister begins aloud and then space is given for congregants to offer their own prayers aloud or in silence. The whole prayer becomes an offering that we make as the body of Christ, as we are led by the Holy Spirit, as individuals. Hearing what one or two phrases people choose to offer in these moments is instructive and perspective-shifting. On my first week there I heard a woman say, “for children in group homes and foster care, that they might have comfort, safety, and find loving homes.” I almost bawled on the spot. Though I have felt passionately about foster care for years, I have never prayed that prayer once in my entire life, but I may pray it now every time for the rest of my life. One congregant has prayed in every service for nearly a decade “for meaningful action on global climate change.” When he is unable to come, someone always offers that prayer in his stead. Often you might hear people say aloud something that is obviously deeply personal and unique to them, but their willingness to offer it aloud gives you an incredible insight into the individual struggles each and every one of us has in life.

The first time you visit a new faith community, it’s hard not to focus on your Mormon-ness. The things that make you different and they ways your own religious and spiritual life might differ from others. In another Christian church, you eventually start to shift focus onto your common Christianity and the shared aspects of our common ancestral faith. My experience last week at Communion yielded to me a third, more transformative focus on our shared Humanity… the things that bind us together as children of God, altogether apart from a construct in which God is strictly necessary. This new depth of focus made the things that once defined me so sharply as a Mormon, seem blurry and unimportant by comparison.

That process (which could accurately be called one of secularization) actually felt and continues to feel profoundly spiritual. Coming closer to God in my experience, actually distinguishes you less and relies less on you meeting some rigid definition of belonging. God doesn’t need us to be any particular way to love us. He wants us as we are. His gospel is about helping us transform ourselves through his grace, into the very best self we can possibly become… for our own joy and fulfillment, not his.

I think it is incredibly important for all of us to break our Mormon habit of insular living. It is too easy for many of us to only have close associations inside the church. If we are not vigilant that will create tunnel vision to outside perspectives and can even manifest as self-righteousness or hostility, despite our intentions. Even within the church there are thousands, even millions, who feel othered, ostracized, and judged by this tendency to insulate ourselves from anyone not like-minded. If that is something you tend to do (and I am very guilty of the same tendency), please repent and ask God for help reaching out to your larger circle of brothers and sisters. Many of this dispensation’s most important revelations remind us that Kingdom of God is ours. I think that’s just as much a statement of responsibility as it is of promise. Because God is still speaking, 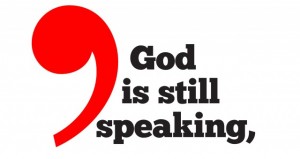