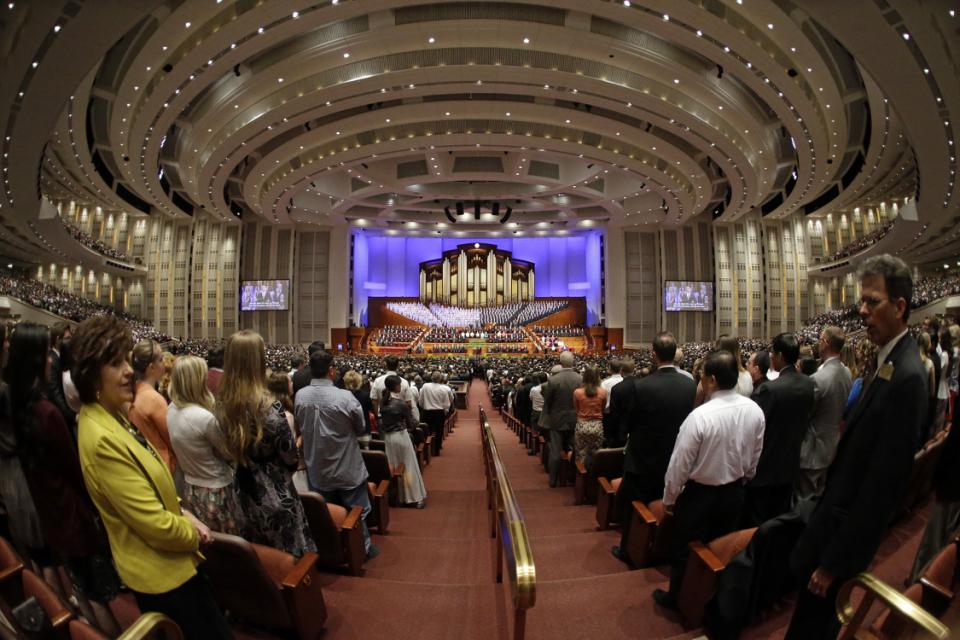 Analogies are powerful things. They can make abstract concepts relatable, even familiar feeling. The wrong analogy can be harmful (see: object lessons about sexual purity). Part of the challenge of symbolic language is that it is difficult to contain and can mean more than we intend. With this in mind, I’d like to share two metaphors from the April General Conference that have stuck with me.

The first was brief, given by Pres. Linda K. Burton in her address on marriage. In speaking of gender complimentarity, she said,

We know from the scriptures that “it is not good that … man should be alone.” That is why our Heavenly Father made “an help meet for him.” The phrase help meet means “a helper suited to, worthy of, or corresponding to him.” For example, our two hands are similar to each other but not exactly the same. In fact, they are exact opposites, but they complement each other and are suited to each other. Working together, they are stronger.

As I was considering this analogy, I thought about my own actual, physical hand. If I look carefully at my hand, the first thought that occurs in describing it is not whether it is the right hand or the left. That is simply not its most significant attribute. The opposable thumb ranks high in consideration alongside other animals. I’m a teacher and free from manual labor, so my hand is relatively soft. I happen to like the size or my hand and its proportions (neither meaty nor delicate). There are lots of things that my hand can do on its own, without a companion. When I put my hands together I find that they are not actually “exactly opposite.” First of all, they are both hands and capable of performing most of the same functions. Neither are they ‘exactly symmetrical’: my left hand has the impression from my ring and also an extra line that only appeared after my hand was in a cast for a broken wrist.

I have surely over-read Pres. Burton’s analogy. But that’s only because I actually like it as a metaphor of gender. The most important thing about each of us should be that we are children of God. We are capable of many of the same tasks and can performing much (most?) of what we need to do in this life on our own. Only when comparing men and women does gender come to the fore as an identifier. Even then, it should be clear that genders are neither opposite not symmetrical. Finally, though it is true that pairing enhances the strength of hands, no two pairs of hands are identical.

Elder Wilford W. Anderson used a much more extensive metaphor in his talk about “The Music of the Gospel.” The metaphor built on an exchange in which a doctor asked “Can you teach me to dance?” and a medicine man replied “I can teach you to dance, but you have to hear the music.” Elder Anderson applied this to the gospel, focusing on the distinction between the outward behavior of the dance and the inner feeling of the music.

Sometimes in our homes, we successfully teach the dance steps but are not as successful in helping our family members to hear the music. And as the old medicine man well knew, it is hard to dance without music. Dancing without music is awkward and unfulfilling—even embarrassing. Have you ever tried it?

As I considered this metaphor, I thought about all those I’d known who had left the Church. Some of them were very good at dancing. Their departures shocked those around them, who saw outwardly that they were “good church members.” But for those who left, the dance had become increasingly awkward. When they came to church they didn’t hear the music, even though they were doing their best to dance. Finally, exhausted by trying to dance perfectly with only a faint melody, they left in search of a clearer strain.

Much of Elder Anderson’s talk was focused on how parents could better teach their children to hear and feel the music of the gospel. But I think his lesson applies to the Church as well. If we spend our lessons and our Sacrament Meetings proclaiming too loudly and continuously the choreography for the gospel – do and don’t, will and won’t, now or never – we can drown out the music of the gospel even for those who are trying to listen. Like my friends who have left, others will leave the room in order to better hear the sacred strains that touch their hearts. Yes, we all need to learn to dance, but never at the expense of the music.

Which metaphors from General Conference – or from other church sources – have touched your heart and perhaps meant more to you than the speaker intended?