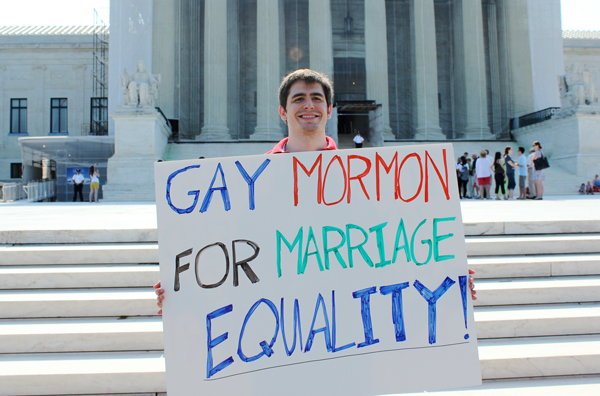 After taking another survey about being openly Gay and actively Mormon I felt the need to write a post for the RationalFaiths.com blog about what that means, how it happened and the reaction of various congregations I have come out to.

Perhaps you are reading this thinking that it is impossible to be both Gay and Mormon, that it is impossible to “serve two masters” or improbable to maintain y faith amidst my sexuality. I stand here to join my voice to the growing chorus of us who hold callings in our wards, who bring dates to Sunday School, and who have become Sassy Gay Friends to countless single sisters. We are here among you, even if you think we, like purple unicorns, don’t exist.

I came out to my ward in 2010 at a mutli-stake fireside in the DC/MD area on the pamphlet “God Loveth His Children” all about same-sex attraction and how David Pruden the president of Evergreen helped to write the resource book for bishops, parents and youth coming to terms with their sexuality. The organizers asked a group of guys with same-sex attraction for a volunteer Youth Speaker and hearing silence from the group I volunteered to tell my story before David Pruden spoke.

I told my story as I have many times before and since about struggling to find out what was Right, what was Truth, what the answer was for all and how relief came only when I changed and prayed to the Lord in the temple stating that I was ready to move forward only I lacked the direction to place my feet. Should I marry a woman, stay celibate, or physically castrate myself. It was in that moment at the SLC temple that I heard a distinct and undeniable voice tell me to search for a husband and prepare to adopt children.

After stating this over the pulpit I quickly moved onto the power of the atonement in our lives to calm the 3 stake presidents behind me so that they would not ask me to stop talking. And with that, 40 people in my ward knew and by the next week everyone was aware that not only did I like other guys, but that I planned on dating and finding a husband.

To many of my ward friends this was something new. They had to confront the mental image that they had in their minds filed away under the word “gay.” No longer could it be a gold-lame thong-clad bedazzled twink at San Francisco pride. No longer could they associate gay with pedophiles. They now had a new mental image, my smiling face that they had known for almost a year who sang in the choir, passed them the sacrament, and baked awesome cookies.

To many of them things shifted because it was their first (but certainly not last) encounter with a living breathing Gay Mormon. They now knew someone who was actively Mormon in the same ways that they were and yet who was open and unashamed about his sexuality.

For many in my ward (and in other wards I have since come out to) I have gained friends and allies. Voices who had no reason to speak up were raised in defense when a teacher or class member spoke degradingly about homosexuality. It has been truly inspiring to see young people in single adult wards stand up and support me even if they aren’t in full support of homosexuality or gay rights. To see members of the Church rally in support of their LGBT brothers and sisters as people while coming to terms with the politics of the issue separately has been wonderful.

Naturally I have had some pushback from some members who have pulled me aside and told me I need to repent, members who have told me that I am possessed by Satan, and members who cite a scripture out of context telling me that in Christ all things (including changing my sexuality) are possible. I have even had some leaders suggest electro-shock therapy (I quickly informed him that we were living in 2011 in San Francisco, so no thank you), or ask me to say I’m “hanging out” with guys instead of “dating them” (contrary to Elder Oaks’ advice to singles). 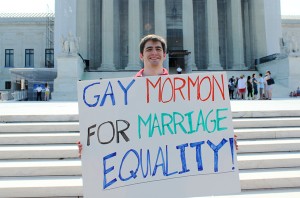 Overall my experience in young single adult wards outside of the Jello Belt has been positive. It has been positive enough that I felt comfortable demonstrating outside the Supreme Court last month with a sign reading “Gay Mormon for Marriage Equality.”

Let me leave those of you still in doubt about how I can be both Gay and Mormon with a quotation by a great man. “We go to the Bars because the Churches are hostile to us.” Harvey Milk, the first openly-gay elected politician said these words and I believe that they are still true, I have been lucky enough to see members of my church stop being hostile towards LGBT members and it causes the miraculous to happen. I am welcomed and valued in the ward as David Baker, both Gay and Mormon.

David Baker grew up in Salt Lake City, Utah. He spent the better part of 3 years struggling to accept his sexuality as a part of his life instead of continually repressing it. The repression took the form of Evergreen-supported counseling to try to change his orientation, deep depression, and a suicide attempt. Graduating with a Bachelor of Science in Political Science from the University of Utah, David moved out to Washington DC. He now serves as a digital strategist to political campaigns and interest groups and enjoys every gut-wrenching moment of it because of the joy it brings. In the little spare time he has you can find David reading a biography, playing video games, volunteering, or following the Savior’s personal call to search for a husband.

All posts by David Baker