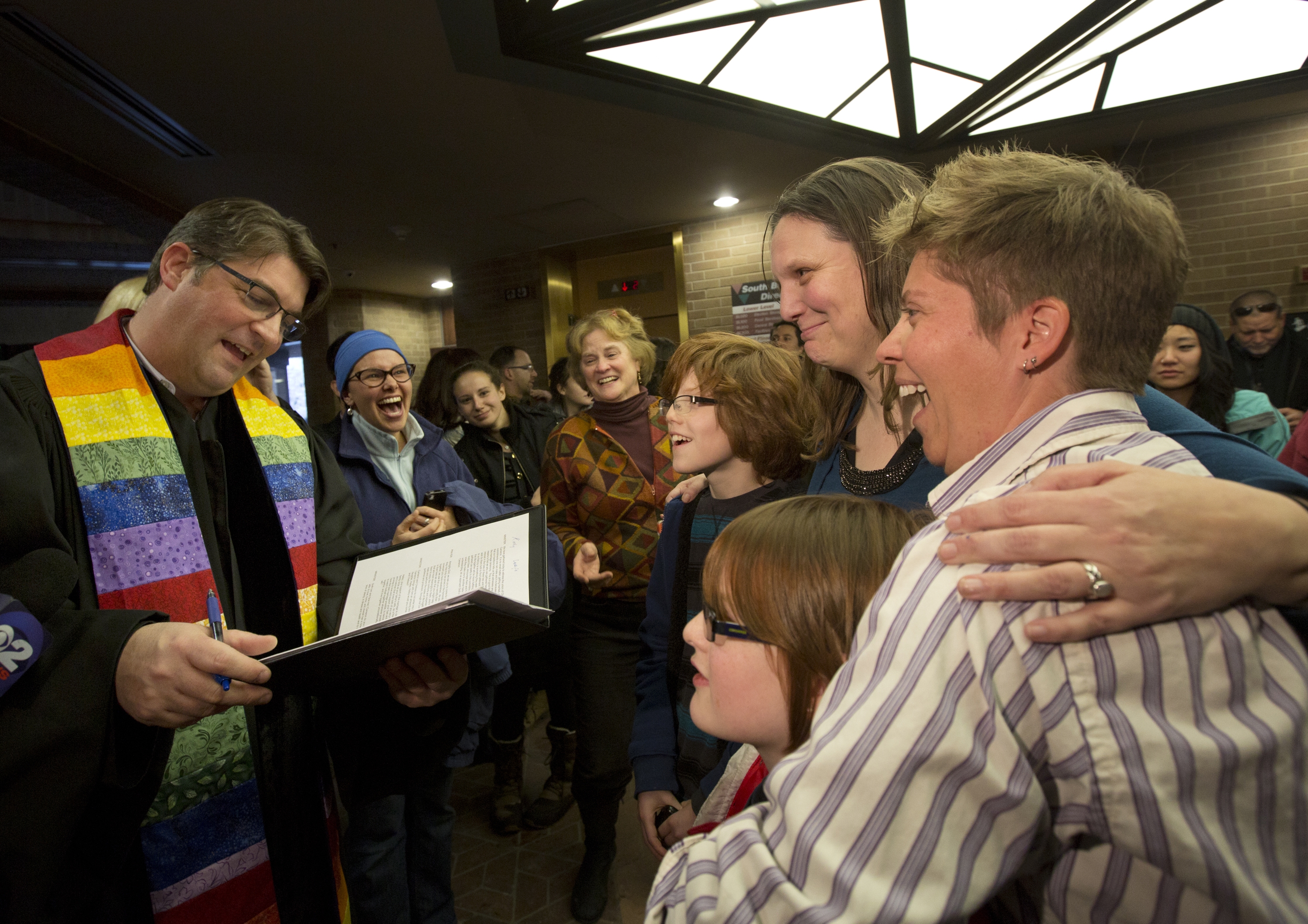 My good friend and author Devery Anderson posted a note on his Facebook status about gay marriage. I thought what he wrote was insightful and needed to be published on our blog. I have edited it for formatting and anything marked with a * are my additions.

Here is a short bio of Devery:

I’m Amazed by how accepting most of my friends have been regarding gay marriage in Utah. Yes, the opponents are keeping silent, for the most part, probably because it is difficult to form a response to this issue that doesn’t sound–for want of a better word–stupid. The responses that people would like to tell me probably will go something like this:

1. “Marriage is under attack.”

Response: Well, if it was under attack, people would be wanting to abolish it, not expand it so that others can enjoy it too. Gay people, like most, think marriage is great. That’s why they want it too!

2. “We need to stand up and defend TRADITIONAL marriage!”

Response: How will any heterosexual marriage be threatened by gay people getting married? Tell me! And what is traditional marriage anyway? You have to focus on a certain time period and say, “This is traditional.” You can’t look over all of American history (let alone, world history) and say marriage has consistently meant one thing.

3. “But the Bible says homosexuality is a sin!

Response: Yes, a few books within a collection of 66 written and compiled by humans through debate and other give-and-take over several centuries say homosexuality is a sin. Never a recorded word by Jesus, however. He preached more against divorce. Why aren’t Christians out there fuming over divorce, and making it illegal? Keep in mind, however, that the Bible is a faith document, accepted by many Americans, but in varying degrees. Some see this compilation as the inerrant word of God–even though God never made that claim for this collection, which people put together long after the individual books were written. Others just sort of believe in it because they have been taught to believe in it since birth, and likely know little beyond a few stories. But the bigger question is: Should a particular religion’s faith document become law for everyone? Is the Bible the Constitution? Churches can still believe and practice what they want and not impose those beliefs on secular law. And do you really want to make legal or illegal everything the Bible endorses or opposes? Do you really want to go there?

4. “But the thought of gays being married is just weird! It isn’t right!”

Response: So, if we keep gay marriage illegal, gays will just go away, is that right? If we keep their relationships illegal, then guess what? We will be griping that they are promiscuous.

Response: No, they can’t. Look at how many teen suicides there are over this issue. Talk to any gay person about how they have tried, how they never felt they chose their sexual orientation, and how liberating it felt to finally accept who they are and love who they are. Proponents of change are basically telling people to change, or else go through life not being happy with the person they are. They are saying that gay people should always, always wish they were straight; that if they have any self-confidence and move beyond the “guilt” of not being straight, that they are in rebellion. Science is showing more and more that sexual orientation is not a choice.  *The Church’s stance: “…Even though individuals do not choose to have such attractions…” (Mormonsandgays.org) So if they don’t choose to have such attractions are they then not born that way?

6. “OK, maybe gays are born that way, but they should just be celibate.”

Response: So, you are saying, with a straight face (no pun intended), that you want to tell a gay teen, “Hey, just hold out alone for the next 70 years, and the next thing you know, you will be a straight spirit in heaven”? Ask any straight person to do that, and see what happens.

7. “But there are straight people who never get married. If they can do it, gays should be able to also!”

Response: Yes, but they are not told from a young age that they HAVE to be celibate. They are encouraged to meet people, date, go out, etc. Heterosexuals who don’t marry are either not interested in getting married, or no one is interested in them. The parallel would be telling a heterosexual couple who are in love that they can’t marry. See how well that one goes over.

Response: An LDS prophet, John Taylor, also said in the 1880s that blacks were preserved through the flood so that Satan could have a representative on earth just like God would. How many of you still believe that one? Mormon leaders said stuff just as bad or worse hundreds of times, right down until the very recent past. Just a few weeks ago, the church came out and disavowed all of the racist things it had said and taught.

9. “OK, all of those racist things they said were just their opinions because they lived in a culture that thought that way.”

Response: Bingo! And we are likely hearing lots of “opinions” today.

Response: As a Mormon historian, I am here to tell you that they do. Most have. Some more than once.

11. “But gay people can’t procreate! Doesn’t that tell you right away that gay relationships aren’t natural?”

Response: I guess that means that people who are infertile should never marry, or that older widows and widowers should not remarry. The fact that so many people remarry before their spouses bodies are even cold tells us that it is no fun, not natural, to be alone. Relationships are about love, not just procreation.

12. “But still–marriage between a man and woman is sacred. It can’t be changed.”

Response: Sacred according to one’s religion, but again, should that be forced upon everyone? If gay marriage being legal means that it is still business as usual for heterosexuals, what’s the big deal? Also, if marriage is a SACRED union in the sense that most Christians refer to it, it would follow that they would be infuriated when a justice of the peace marries a couple, when an atheist with authority from the state marries a couple, when someone marries a spouse so they can stay in the country, etc. Heck, it is perfectly legal for an 18-year-old boy to marry a 90-year-old woman for her money, or some other reason. Doesn’t that violate marriage being sacred also? *Keep in mind that we practiced polygamy before the government forced us to stop. During that time period monogamy (one man and one woman) was the enemy.

“Monogamy, or restrictions by law to one wife, is no part of the economy of heaven among men. Such a system was commenced by the founders of the Roman Empire… Rome became the mistress of the world, and introduced this order of monogamy wherever her sway was acknowledged. Thus this monogamic order of marriage, so esteemed by modern Christians as a hold sacrament and divine institution, is nothing but a system established by a set of robbers.”– Prophet Brigham Young, Deseret News, August 6, 1862

Response: But you aren’t freaking out about it. And yet marriage has survived these “threats” to its sacred nature.

*14. “But what about The Family: A Proclamation to the World that defines marriage between a man and a woman?”

Response: The proclamation states: “Marriage between man and woman is essential to His eternal plan.” It doesn’t say this is the ONLY way. This doesn’t say anything about gay marriage. It only says that this type of marriage is essential. In our belief system, this is how we complete the commandment to “replenish the earth.”

It also states: “Children are entitled to birth within the bonds of matrimony, and to be reared by a father and a mother who honor marital vows with complete fidelity.” This goes directly to rearing children.  See #11.  There are many in our Church that are single mothers and single fathers, how does this apply to them? This is a big issue because Utah has the highest divorce rate. (Channel 4 News)

Also when reading the Proclamation one must also consider these two things:

2. This year the Church released a new edition of the scriptures. The Proclamation was not added.

All in all one must consider the LGBT community we are shunning with this marriage rhetoric. By hyper-focusing on this issue of gay marriage, we are missing a good opportunity to extend our love and compassion to our gay brothers and sisters. We have a growing number of homeless teens that identify as LGBT. These kids are being kicked out by their families because they are LBGT. Suicide is especially high amongst them. People are killing themselves and all we can talk about is gay marriage.  People are killing themselves because they can’t fit in. Can we change this?

Devery S. Anderson is a graduate of the University of Utah and is the editor or co-editor of four books on Mormon history, two of which won the Stephen F. Christensen Award for Best Documentary from the Mormon History Association in 2006. His book, Emmett Till: The Murder That Shocked the World and Propelled the Civil Rights Movement, will be released in late August 2015 (in time for the sixtieth anniversary of the case), and is the product of ten years of exhaustive research and writing. His research took him to the South and Chicago on over a dozen occasions, where he interviewed witnesses, family members of both Emmett Till and his accused killers and spent countless hours in libraries and archives. He has spoken on the Till case throughout the United States and the United Kingdom. He lives in Salt Lake City, is the father of three children, and is an editor at Signature Books.

All posts by Devery Anderson