From Amici to ’Ohana: The Hawaiian Roots of the Family Proclamation 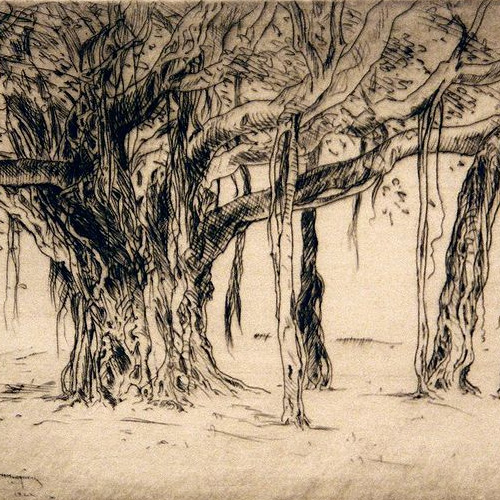 As we join Mr. Peabody and Sherman on their journey back in time, we remind ourselves what was happening in the Mormon American West in the early 1990s. Ezra Taft Benson was the prophet and titular leader of the LDS Church, but he was in ill health, to say the least. First Counselor Gordon B. Hinckley was the public spokesman in many places (a supportive role he continued throughout successor Howard W. Hunter’s administration until he became the new president of the Church on March 12, 1995). Boyd K. Packer was the Acting President of the Quorum of the Twelve Apostles since Hinckley was serving in the First Presidency rather than the larger quorum. President Packer and Spencer W. Kimball had regularly addressed the Church at large regarding issues related to gender roles, sexuality, family values, and chastity.

Our trip in time will help us to understand the context for the creation of the LDS Proclamation on the Family. While there were other places dealing with same-sex marriage and gay rights at the time, notably Colorado and Alaska, Hawaii’s issues were pivotal. Perhaps our historical insights will make a difference in how we view the document.

After September’s arguments in Baehr v. Lewin, it is only a couple of weeks before the ruling is issued. In early October 1991, Hawaii’s Regional Representative Donald L. Hallstrom picks up a newspaper to read that the first same-sex marriage case in the state has been decided. The verdict: Case dismissed for, among other things, failing to state a relievable claim, and the couples appeal to the state’s supreme court. If Hawaii’s highest court takes the case, same-sex marriage could come to Hawaii. Hallstrom makes sure his priesthood leaders are aware of the situation.

Despite the flurry of activity surrounding October’s General Conference and the illness of President Benson, within weeks the First Presidency still comes up with a letter addressing homosexuality. On November 14, 1991, their letter titled “Standards of Morality and Fidelity” reads in part:

We call upon members to renew their commitment to live the Lord’s standard of moral conduct. Parents should teach their children the sacred nature of procreative powers and instill in them a desire to be chaste in thought and deed. A correct understanding of the divinely appointed roles of men and women will fortify all against sinful practices. Our only real safety, physically and spiritually, lies in keeping the Lord’s commandments.

The Lord’s law of moral conduct is abstinence outside of lawful marriage and fidelity within marriage. Sexual relations are proper only between husband and wife appropriately expressed within the bonds of marriage. Any other sexual contact, including fornication, adultery, and homosexual and lesbian behavior, is sinful. Those who persist in such practices or who influence others to do so are subject to Church discipline.

Justices heard the case in October 1992, and the appellate ruling came down on May 1993: If the government planned to prevent same-sex marriages, it needed a compelling reason to do so. Otherwise, limiting who one may marry is sex-based discrimination, which is unconstitutional in Hawaii. The high court sent the case back to the trial court for review using the higher court’s guidelines, which gave the legislature time to take action during its next session in January 1994.

Legislatively, Mormons and Catholics worked to influence the outcome of bills aimed at keeping marriage between a man and a woman by providing expert testimony, hiring lobbyists and reviewing legislation, and generally working behind the scenes and out of spotlights.

Publicly, the First Presidency issued another letter dated February 1, 1994, presaging the language that would be found in the Proclamation on the Family. An excerpt from this letter appeared in the Church Handbook of Instructions beginning in 1998 and remained there until its 2010 revision:

Marriage between a man and a woman is ordained of God to fulfill the eternal destiny of His children. The union of husband and wife assures perpetuation of the race and provides a divinely ordained setting for the nurturing and teaching of children. This sacred family setting, with father and mother and children firmly committed to each other and to righteous living, offers the best hope for avoiding many of the ills that afflict society.

We encourage members to appeal to legislators, judges, and other government officials to preserve the purposes and sanctity of marriage between a man and a woman, and to reject all efforts to give legal authorization or other official approval or support to marriages between persons of the same gender.

After another year of working with legislators, attorneys and others in Hawaii, in February 1995, the Church announced it had decided to file a petition to intervene in the Baehr case in order to “protect freedom of religion to solemnize marriages between a man and a woman under Hawaiian law.” Elder Hallstrom reinforced the importance of this move by the church, saying “There are times when certain moral issues become so compelling that the churches have a duty to make their feelings known.” The trial court eventually rejected the petition on grounds that the church had failed to demonstrate it had any “property or transaction” in the case at hand, and the Supreme Court upheld that decision.1

Over on the Mainland, an ailing President Howard W. Hunter died. He’d served as LDS president from the time Benson died in May 1994 until March 3rd, 1995. On March 12, 1995, Gordon B. Hinckley became the president of the Church. It was still less than one month after the announcement that the Church would be intervening in the Baehr case, but before the petition to intervene was denied. Priesthood leaders were hearing reports from Hawaii about the progress of same-sex marriage cases and Area President Loren C. Dunn prepared to fly out to Hawaii and begin gathering a coalition together in the Fall.

Two weeks before the October 1995 General Conference, President Hinckley met with the General Relief Society presidency to discuss their plans for their general meeting that would be held the last Saturday in September. At that time, he informed President Elaine Jack and her counselors Aileen Clyde and Chieko Okazaki that he had a Proclamation on the Family that he was going to introduce at conference and that during the course of their meeting, he had decided that he would like to make it public during the Relief Society meeting. He also asked the General Relief Society presidency to adjust the focus of their remarks so that they would address the idea of “traditional families” rather than the diversity curriculum they had previously prepared. The audio is not strong in this video, but it is a recording of Aileen Clyde speaking at a women’s conference at Claremont Graduate University in 2011, telling this story.

Sister Okazaki also discussed how the General Relief Society presidency learned about the Proclamation when she sat down with Greg Prince in November, 2005.  Prince captured that interview in the Spring 2012 issue of Dialogue . As she recalled,

[I]n 1995 when “The Family: A Proclamation to the World” was written, the Relief Society presidency was asked to come to a meeting. We did, and they read this proclamation. It was all finished. The only question was whether they should present it at the priesthood meeting or at the Relief Society meeting. It didn’t matter to me where it was presented. What I wanted to know was, “How come we weren’t consulted?”…

They just asked us which meeting to present it in, and we said, “Whatever President Hinckley decides is fine with us.” He decided to do it at the Relief Society meeting. The apostle who was our liaison said, “Isn’t it wonderful that he made the choice to present it at the Relief Society meeting?” Well, that was fine, but as I read it I thought that we could have made a few changes in it.

Sometimes I think they get so busy that they forget that we are there. (p. 136)

Back in Hawaii, legal work surrounding the Baehr case continued. This time, it was Baehr v. Miike and over the summer both the LDS Church and its political organization Hawaii’s Future Today filed amicus briefs for the lower court to consider. The lower court heard the case on September 10, 1996 and issued its ruling on December 3, 1996, finding that same-sex couples were entitled to receive marriage licenses.

The case was again appealed to Hawaii’s Supreme Court and this time, on April 14, 1997, theLDS Church filed an amicus brief2. In this brief, the Church cited the Proclamation on the Family as evidence of the centrality of tradition marriage in Mormon doctrine and practice for the first time. One of the requirements for filing an amicus curiae, or “friend of the court” brief is that the petitioner submitting the brief must present to the court valid reasons why the court should allow the petitioner, who is not a party to the case, to be heard on the matter. Conveniently, the Proclamation ties all of the major family-related policies and teachings together in one place, making it easy to include as an exhibit in a legal brief. Two decades later, it has become quasi-scriptural for many Mormons, further confirming the notion that, as it proclaims, “the family is central” not only to “the Creator’s plans” but also to Mormon religious beliefs and practices as well.

In 1998, Hawaii’s legislature passed a constitutional amendment exempting same-sex marriage from sexual discrimination and noting that marriage in Hawaii would be between one man and one woman. LDS and Catholic lobbyists and political groups, working together under the banner Save Traditional Marriage ’98 (which grew out of the group, Hawaii’s Future Today, organized in late 1995) were influential in getting both the legal language and the grass-roots support for the amendment. When the Baehr appeal was finally heard again in 1999, same-sex marriage was found unconstitutional in Hawaii, and it remained so until December 2013.

The Proclamation on the Family began its national political role when it was read into the official records of the U.S. House of Representatives on November 17, 1995, four days after President Hinckley met with U.S. President Bill Clinton. It has been used in dozens of court cases, legislative sessions, hearings, and conventions in the United States and around the world wherever issues of same-sex marriage, gender roles, abortion, family values, or Defense of Marriage Acts have been brought up. 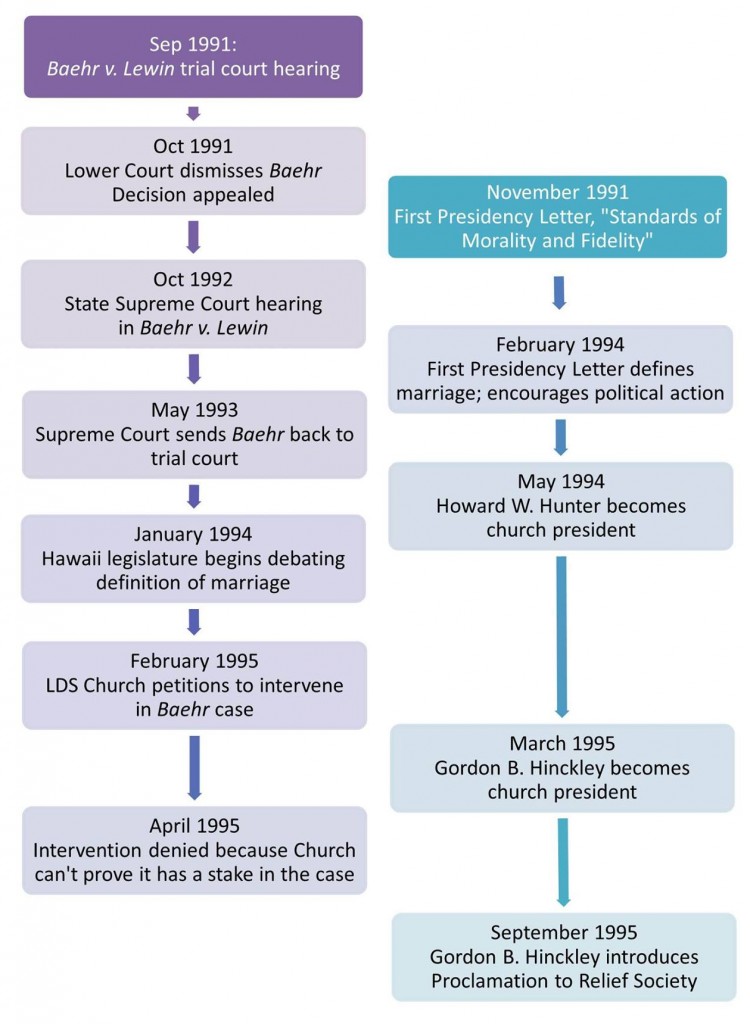 1 The trial court’s decision came in April 1995 and the Supreme Court upheld that position in its January, 1996 ruling.

2 Hawaii’s Future Today, the political group led by Mormons and Catholics, also submitted an amicus brief in this case on March 17, 1997 and on May 12, 1997, Utah joined an amicus brief filed by 11 other states as well.

Laura Compton is currently working on a book about homosexuality, same-sex marriage and the Mormon church. If she weren't having so many fun and growing experiences as a wife, mother, paraeducator and occasional blogger, she'd be finished by now.

All posts by Laura Compton