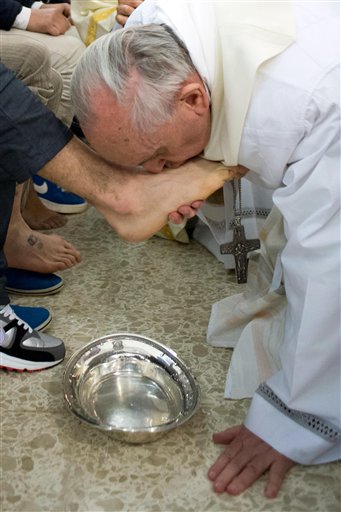 “There is a natural order to this world, and those who try to upend it do not fare well”  –Cloud Atlas

It all started three years ago when this newly anointed Pope chose to go to a Juvenile Detention Center and there personally wash and even kiss the feet of twelve inmates. Traditionalists called this the “final straw” of leading the Catholic church astray, just a few weeks into his Papacy. Because they were minors we did not see their faces but only their feet. We are told that two of the twelve were women, one even a Muslim, a couple North Africans and one foot even had tattoos. Not to pat myself on the back too much, but three years ago before this Pope was chosen to lead the Catholic church, I speculated that if the Catholic church relied on the unmanageable pursuit of revelation through prayer and fasting in choosing their leader rather than engaging in either the scripturally endorsed lottery system (Acts 1:26) or the new and improved, Lord directed death queue process of the only true and inerrant church, that maybe, just maybe, the Great and Abominable church might unwittingly choose someone who does not understand the proper order of things.

It does not take a first class apologist or a team of Maxwell Institutionalists to illustrate how this new Pope is leading his church into even greater mists of darkness and error — but the fat pitches keep coming so I can’t help but try to hit a few of his obvious mistakes out of the park by contrasting each of his acts with what we have come to know is the Lord’s “proper order of things.”

The very night that Pope Francis became the new Pope, he emerged from the loggia of St. Peter’s Basilica without his Sunday’s best (red cape, mozzetta, etc.). Instead he showed up in a simple white cassock.

This would be the equivalent of a Bishop showing up to a sacrament meeting in jeans and a T-shirt! or worse the horror of a Relief Society President showing up to church in pants.

“I believe He (Jesus) also desires us to dress appropriately . . . we know that when Sunday dress deteriorates that everyday attire, attitudes and action follow” –L. Tom Perry April 2011 General Conference

Pope Francis with his blatant disregard for his Sunday best appearance in church is a part of his overall behavior that just might set back Christianity a good two thousand years. Could you imagine our Church leaders officiating in blue jeans or without a tie? Or even worse, Jesus ignoring the dress code of his day?

“Through your dress and appearance you can show that you are a disciple of Jesus Christ and that you love Him” –For The Strength of Youth 2012.

But it gets worse,

Another sign of Pope Francis leading his church astray from pure Christianity came when he refused to sit on his Chief Seat when addressing and receiving the sustaining vote of the Cardinals.

“The one who presides in a meeting must sit on the stand; we arise when a presiding leader enters a room; leaders are to enter and depart a room by seniority” -Boyd K. Packer.

“if you have a concern do not go to the General Authorities” and “Revelation in the church is vertical.” —more BKP.

This may seem like a small thing, but Boyd oh Boyd, it is not!

“The Unwritten Order of Things” by Elder Packer 10/15/96 — Enough Said!! (Note: We have even advanced in the gospel to the point that our Apostles eat from their chocolate box by seniority – Elder Perry)

How can leaders expect to command obedience to their authority if the place themselves either on equal or, even worse, in a subservient capacity to their subjects?

While the two aforementioned acts by this Pope could be explained away by his inexperience and lack of “grooming” to be a leader, this Pope’s washing the feet of those obviously unworthy of such an honor is unmistakably a sign of being clueless as to the nature of such a sacred rite.

“washing of feet is a holy and sacred rite that is not done before the world or for worldly people and it is reserved for those who believe and obey the gospel thereby making themselves worthy.” -Doctrinal New Testament Commentary, Bruce R. McConkie.

He would have also known that:

“the ordinance of washing of the feet is to be done in holy places for those who make themselves worthy” -Ludlow, Companion Study of D&C,

and not in a Juvenile Detention Center — of all places!

Did this Pope even consider which inmates at the prison to bow down before and then wash and kiss their feet? Did he know beforehand that one of the inmates (Muslim girl) was not even a believer in Jesus? Did he realize that one had tattoos on his/her feet? For all we know that same inmate might have had two sets of earrings in his/her ear and not just one — thus rendering him/her not even worthy to associate with much less wash his/her feet. Did he even check that out before rewarding him/her with not only his association but with such an honor? Did he consider that when he washed the feet of two young girls he was breaking with past Papal tradition of only washing men’s (Cardinals and not Nuns) feet he was sending a not so subtle message that women should be treated as equal before God in such high honors and privileges? I do not believe he was thinking at all, or if he was, he sure showed a lack of spiritual maturity in understanding that acts of such love and acceptance are conditional on obedience

If we were to extend such blessings and honors without the individual having earned, through their obedience, such privileges and acts of love and acceptance, then why would anyone ever need to repent of their sins — or in this case the crimes that landed them in prison? 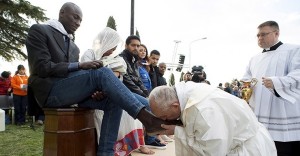 While the preliminary acts by Pope Francis may be disconcerting, the reality is that as soon as he gets used to wielding power and authority, his radical Jesuit order tendencies of focusing on the poor, the least and outcast should naturally and predictably subside soon enough.  He will be forgiven these early indiscretions as long as he learns the one secret to the establishment of any great religious institution of our day: “there is no other way” that a great church can thrive and survive long term and have the respect of its adherent without building splendid houses of worship concurrent with careful investing in the profitable ventures this world offers—- while carefully guarding its wealth by teaching the needy and poor “self reliance.” It cannot be built upon a “fish and loaves” model where everything the corporate church/empire holds is sold and given to the poor.

But what if Pope Francis gets carried away and actually starts selling all of the  church assets and giving it to the poor? or if he in Jesuit humility publicly confesses his church’s past and present sins upon the truly defenseless? or if he begins to seek reconciliation with Jews, Muslims, Intellectuals, Atheists, Feminists and others enemies of the Church?  Such subversive acts by any church leader would cause him to lose his Chief Seat in short order or else his church would collapse and “great must be the fall thereof.”

So here’s some free advice to Pope Francis: Get with the Program! Put on your Sunday best, ascend to the throne or at least a red velvet chair, do not spend your church’s excessive capital on the poor for which there is no return, have your PR people screen all your statements, and for heaven’s sake if you have a need to wash feet then make sure the recipients are the worthy elite and it is done in holy places. The world is watching.

Ron practices law with his son and daughter in law in Alpine, Utah. He also has his Sailing Captain's license and owns and operates a marina on Utah Lake. He enjoys tennis, basketball, doctrinal bungee-jumping, and nine grandchildren. Ron writes regularly for "Mormon Worker blog."

All posts by Ron Madson