A Search for Book of Mormon Heroines 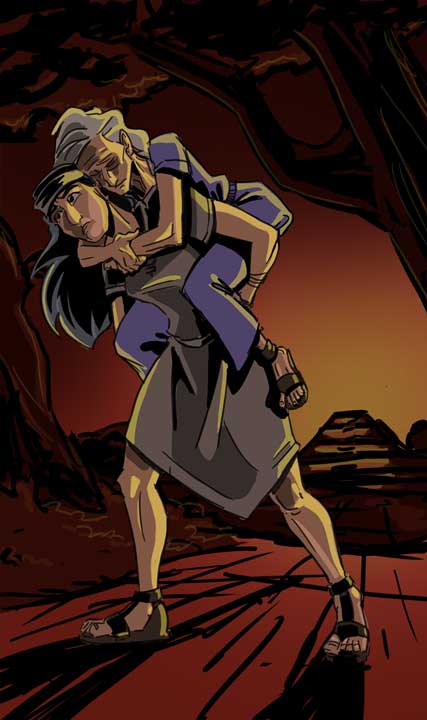 Last year around this time, Jeanette Atwood and I released iPlates: Volume I, a comic book based on stories from the Book of Mormon. The plot revolved around Zeniff: the guy in the book of Mosiah who decides he can peacefully reclaim the Land of Nephi from the Lamanites. He recruits some bright-eyed folks itching for an adventure and sets off with them into the wilderness. In our story, one member of the party, Abinadi, eventually becomes Zeniff’s adviser and confidant.

As the story progresses, Abinadi becomes a kind of adopted uncle to young Noah as he grows up—even saving his life at one point. Then Zeniff dies, Noah takes control of the kingdom, and Abinadi watches the people descend into hardship and wickedness.

When Abinadi is finally brought in chains before King Noah, the scene is much more than an interrogation: it becomes the tragic culmination of long relationship.

I have no idea if Abinadi and Noah actually knew each other, but the possibility makes for a story that propels me into a deeper contemplation of the Book of Mormon, its themes, and its characters.

As we began producing iPlates: Volume II, Jeanette and I wanted to dig even deeper into the Book of Mormon’s possibilities. We wanted to go somewhere we hadn’t gone before. So we decided to bring a female protagonist into the story.

When I started writing, I’ll admit that I felt completely at sea. You and I both know that there are very few female characters in the Book of Mormon. The only ones I can name off-hand are Sariah, Abish, and Isabel (besides the references to Mary and Eve). The rest are referenced collectively as sisters, wives, daughters, or mothers.

So, in an act of desperation, I made a female show up in the wilderness where Alma (having recently been ejected from King Noah’s court) is hiding. Her name is Sybil, and it turns out that Alma had known her at the palace. Suddenly, I had at least part of a story: Is Sybil there as a spy for King Noah, or is she there as an honest seeker of truth?

It was a start, but it didn’t feel like enough. So Jeanette and I decided to bring in one more female protagonist. This time, I wanted to be a little more responsible, so I delved into the chapters of Mosiah that Volume II covers in hopes of finding evidence of a feminine touch. After all, roughly half the Book of Mormon population was female. The odds seemed in my favor.

And I think I found it: a surprising and brave act that seems to come from outside the battle-laden worldview the Book of Mormon usually chronicles; an act that evinces a practical, world-wise, yet peace-loving soul; an act that saves many lives.

That is where Zerin started to take shape.

Even though it feels unfamiliar to introduce female characters into a story based on the Book of Mormon, I have to admit, the story has gained all kinds of depth, complexity, and nuance because of their influence. Bringing Sybil and Zerin into the plot has made me consider the Book of Mormon narrative with a greater sense of possibility. Where else in those 500 pages might a female sensibility be hiding?

I’m excited to find out.