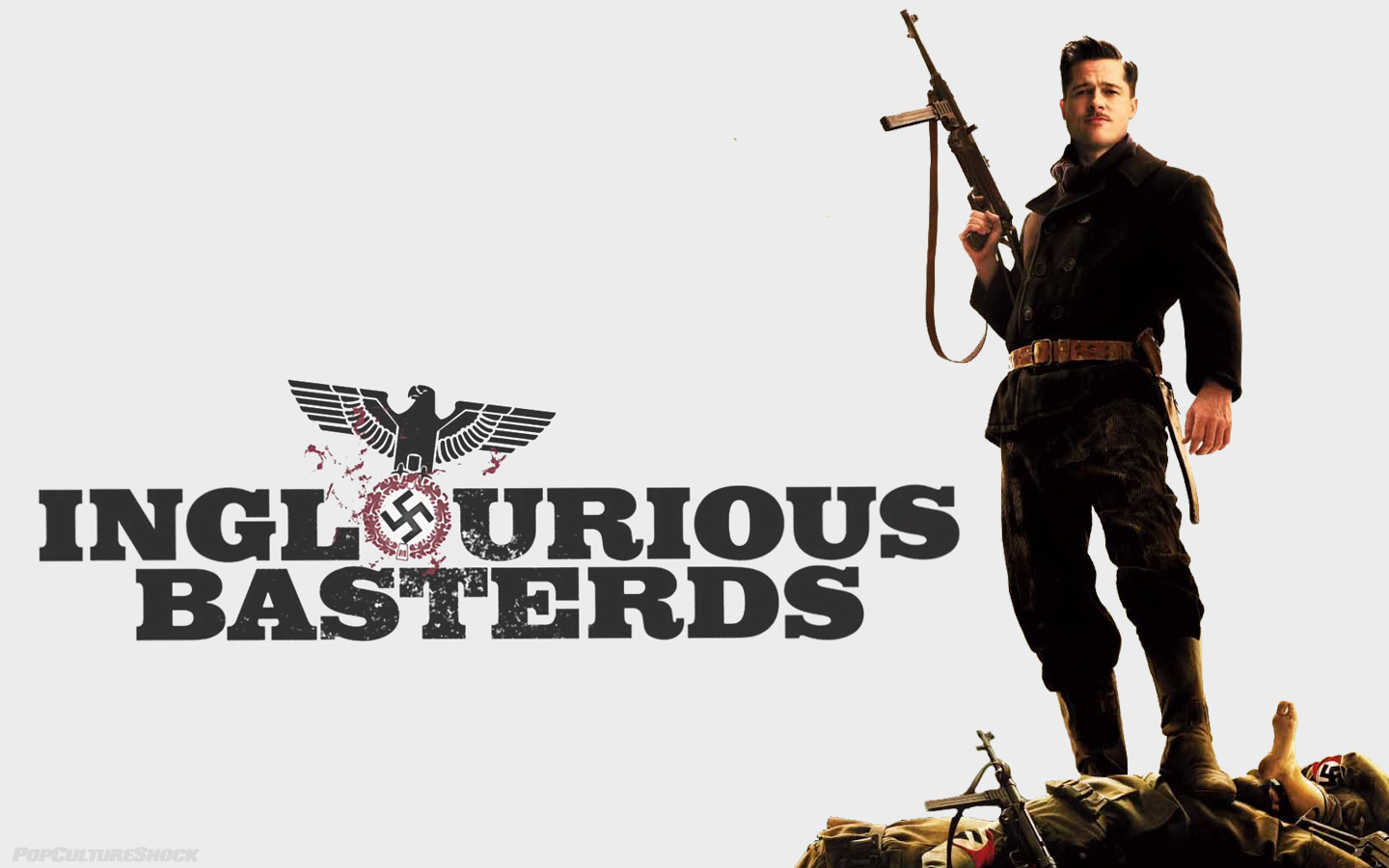 One Sunday a couple years ago, I found myself standing with arms folded and my back against the zig-zag partition of the rear overflow of the cultural hall amidst the bustling chit-chat before Priesthood Opening Exercises. A fellow brother joined me at my side, mimicking my folded-arm stance. As the meeting started, a zealous white-shirted man excitedly told us of an opportunity to clean the Temple the following month and eagerly looked for volunteers. My friend leaned over and whispered, “Can someone explain to me why we are too cheap to hire people to clean our buildings?”

My ears perked up at this remark. I smirked and while still looking forward whispered back “Yeah, it’s funny how we use the excuse of job creation to justify building Monson’s multi-billion dollar mall, yet we can’t fork out a minimum wage to hire someone to vacuum some carpets.” I continued to look forward smugly as I awaited a response from my fellow griper. But nothing came — no laugh, no chuckle, not even a chortle. I looked over nervously and found my gaze met by a threatening glare. My smirk disappeared.

“What did you just say?” He sharply whispered with a furrowed brow.

I felt my head crane back and my weight shift onto my heels. “Well, I’m just not sure what to think about the whole City Creek project. That’s a lot of money to spend on high end retail considering we bear the name of a certain Homeless Carpenter that overtly disparaged material wealth. I’m just not sure how they can justify it.”

“Don’t you trust your leaders?” He snapped back.

For whatever reason this made my blood boil, and in a fleeting moment of impulse I returned his glare and blurted out, “I don’t put my trust in the arm of flesh.”

His piercing squint slowly widened with shock. He stepped away and with a tremble in his voice warned, “You need to be careful. I don’t know what’s going on with you, but you need to reevaluate where you stand . . . I’m serious.” I pursed my lips and looked forward and quietly shook my head as he backed away. It took a year-and-a-half before we would speak to each other again. 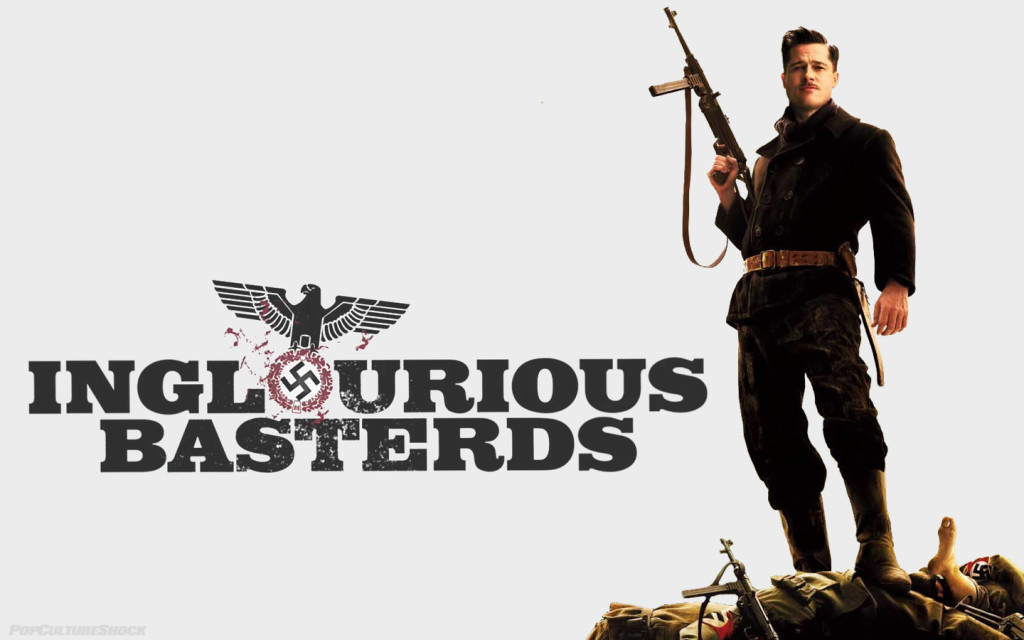 This exchange (and many others like it) remind me of a pivotal scene in Quentin Tarintino’s brilliant World War II Spaghetti Western Inglourious Basterds. The scene takes place inside a quaint tavern nestled in a small French village. Disguised as a German officer, British spy Lt. Hicox and German double agent and film star Bridget von Hammersmart find themselves in the midst of a dozen intoxicated Nazi soldiers. The tension beautifully builds as Hicox and Von Hammersmart attempt to mingle with the German troops undetected. All the while the Nazis gradually realize there is something amiss about Hicox and his strange accent. 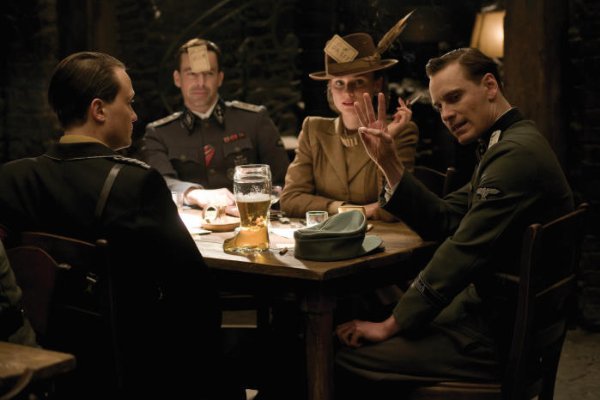 Dripping with confidence, Hicox successfully assuages these suspicions, until he mistakenly signals the bar tender for three glasses of scotch by shooting his three middle fingers in the air. We learn later that this gesture is very different from the “German three,” which is signaled by extending the middle finger, pointer, and thumb, while keeping the pinky and ring finger closed. Hicox’s gaffe confirms the Nazis’ suspicions, and after a sudden altercation the tavern erupts in gunfire. In typical Tarantino fashion, nearly everyone in the tavern dies.

I love this wonderfully orchestrated scene from one of my all-time favorite films. It beautifully demonstrates the barriers of human language, and how muddy our ability to communicate can be. Lt. Hicox is remarkably fluent in German, and before the War was an enthusiast of German cinema. Though his vocabulary, grammar, and cultural knowledge was impeccable and almost convincing to his discerning adversaries, that one innocent gesture — three simple fingers — resulted in death and carnage.

Language is very fickle, indeed. Though my wardie from the first story and I were both speaking English, we were still not using the same language. I could hear and comprehend his Mormon Dialect just fine, but like a missionary long returned from some foreign land, I was unable to respond in the same tongue of which I used to be fluent. And like the unassuming three fingers in Tarantino’s French tavern, my attempt at communication tragically backfired. A few simple words were all it took. My other vestiges of Mormon-ness collapsed around me, and I was perceived as an imposter, a heretic, a threat.

The challenge then, both for myself and anyone with whom such miscommunications can occur, is to find ways to either learn each others’ language, or perhaps transcend language altogether. I’m experimenting with this right now with a few of my ward members. I’ve spent a great deal of time nurturing some of these relationships. I make sure both to carefully craft my own communication, but also to deeply listen — and rather than listen to the words being said, I try to listen past the words to the underlying emotions, intentions, passions, and fears that those words are being used to convey.

For example, over recent months I’ve been able to restart a dialogue with the same wardie from the above story. It’s been a good do-over so far, but occasionally he will say things to me like, “Micah, sometimes I think you’re just a Korihor leading people astray,” or “How does a guy like me not view a guy like you as a fox in a hen house, or a wolf in sheep’s clothing?” If I listen to these words, they can feel very hurtful and judgmental. But when I listen to the emotion and concern underneath his words, what I might hear instead is “Micah, I’m scared,” or “Micah, I’m threatened by you.” This new translation changes everything. Instead of reacting to the indictments of some correlated asshole, I now find myself yearning to console, persuade, and love someone that has likewise mistranslated my own hopes, concerns, and fears.

This is where I think we can transition from an experience of stumbling to understand language to a deeper exchange where we attempt to understand the hearts and souls of others. It certainly isn’t easy. But my hope is that if we can do this effectively — if we can move past the sticky netting of human language and engage each other heart-to-heart — it will allow us to carve out new spaces within our wards and communities, and perhaps bring us closer to the Zion we’ve all covenanted to build together.

Click here if you would like to listen to some of Micah’s interview on A Thoughtful Faith podcast.

Micah Nickolaisen is a photographer and active, faithful Latter-Day Saint living in Chandler, Arizona. You can read more of his thoughts and story at FaithfulHeretic.com. Micah also manages and hosts the new LDS podcast Exploring Sainthood.

All posts by Micah