A Feminist’s Defense of Polygamy 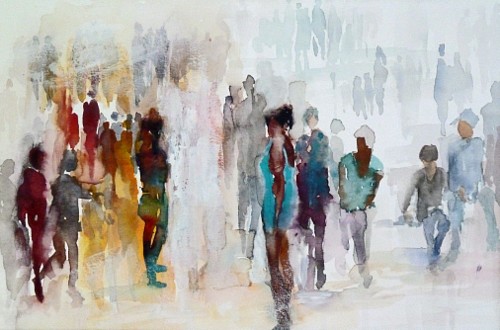 I am a Mormon feminist and I support polygamy.

Before you get out your torches and pitchforks, hear me out. We may have more in common than you think.

While I don’t recoil at having another spouse or my husband having another spouse, I do recoil at mandated polygamy as a requirement for the highest degree of celestial glory. I recoil at authoritarianism, patriarchy, and androcentrism, which are often associated with polygamy. I recoil at any marital or sexual practice imposed on consenting adults in exchange for selective salvation; including but not limited to monogamy, polygamy, or heteronormativity.

First, let’s start with accurate definitions. Polyandry is when one person is married to multiple men. Polygyny is when one person is married to multiple women. Polygamy or plural marriage is any combination of polyandry and polygyny. Monogamy is one sexual or marital partner. More commonly practiced is serial monogamy—one monogamous partner at a time. Arguably, serial monogamy is a form of polygamy, especially among Mormons who believe in eternal sealings and everlasting relationships. These serial monogamous sealings are reserved generally for men. Granted there are some minor exceptions for dead women, which is hardly a consolation for living women.

Early Mormon polygamy was exceptionally complicated and steeped in authoritarianism, sexism, racism, superstition, and coercion. I agree with many critiques of early Mormon polygamy involving underage participants, violence, castration, manipulation, rape, and deceit. Early Mormon polygamy hurt many people. However, I can list many mistakes and abuses in monogamous marriages of the 19th century, but that doesn’t make monogamy inherently wrong. This is not an apologetic appeal to justify wrongful behaviors. I simply seek to isolate the oppressive behaviors from the marital practice.

Frankly, it would be about as nonsensical to ask Mormons to denounce a polygamous parent as it would be to ask Mormons to denounce a homosexual parent. That is not an appeal to conflate the legalization of polygamy with the legalization of gay marriage. There are some significant similarities and differences in overcoming social and practical obstacles. However, it is possible for a person to respect a homosexual marriage and family, while still not desiring it for themselves. I know many people have strong repulsions toward polygamy and I respect a person’s right to reject it for themselves. I would also hope in return people would not callously reject a person’s desire to practice polygamy.

Perhaps polygamy was essential to the uniqueness of Mormonism that solidified relationships among the early Saints. They were a very queer and peculiar people. Mormonism, as a social group, thrived under the “Us versus Them” narrative perpetuated by the US government. Even early Mormon Feminists were supportive of the legalization of polygamy. Clearly, there was something very real, almost tangible, which resulted in the practice of plural marriage. I don’t know if the Church would have survived without polygamy, not for procreative purposes but for social purposes. I haven’t any idea what Mormonism would look like without polygamy. There’s no aspect of the LDS Church that hasn’t been influenced by the practice of polygamy. Denouncing polygamy is practically tantamount to denouncing the entire religion. It’s that fundamental to our foundation.

Abstractly, the concept of multiple sealings (even the whole of humanity) as an interconnected community is deeply inspiring to me. To reduce plural sealings to a meager sexual relationship would be a sore disservice to the richness of our Mormon theology, even if there are clear examples of primitive lustful desires influencing early Mormon polygamy. Plural marriage, at its core, is the idea that we are capable of radically loving more than one person, perhaps even every being on the planet. This may or may not include a sexual relationship, and this notion should respect the consent of all participants. I find the hetero-patriarchal control over the practice of multiple sealings frustrating, because it puts limitations on the rituals I participate in that are gestures of my love and commitment toward other human beings, my religion, and ultimately God. These limitations on sealings seem nonsensical and counterintuitive to Mormonism’s ultimate trajectory—the transcendence of all humanity.

Sadly, current LDS sealing practices still support a patriarchal approach to plural marriage. They pose inequitable opportunities for men and women when each is given different expectations and limitations. Even though LDS temple sealings are patriarchal and androcentric, temple practices and policies have dramatically changed over the years. I trust policies will continue to evolve to include the equitable participation of women. However, to advocate for the complete removal of polygamy in the name of feminism to then only mandate monogamy is simply replacing one potentially oppressive mandate for another. The feminist stance on sexual and marital practices should value individual agency while also working towards a safe environment where participants’ desires and values are respected, whether they are polygamous or monogamous.

Any depictions of the Celestial Kingdom that mandate such oppressive marital requirements for salvation and glory is not worthy of our aspirations. Doctrine and Covenants 88:18-20 prophesies that the earth may be prepared for celestial glory. The Celestial Kingdom is prophesied to be right here if we choose to cultivate such a godly community which respects diverse desires, but also serves to unify the whole of humanity in one eternal family in its diversity.

Imagine a civilization that is so radically compassionate and advanced they have transcended traditional notions of the human condition. At that point our species would warrant a new term, posthuman. This celestial civilization would be indistinguishable from God. Mormonism teaches that we have the potential to not only live with God again, but also to become Gods ourselves. Mormons prophesy of a very material and communal transcendence of humanity. We are taught to collectively build Zion, which includes a posthuman civilization of radically compassionate and creative beings, or Gods. The intimacy a couple may experience in a marital or sexual relationship would be dwarfed in comparison to the intimacy we experience with God. The concept of plural spouses would be almost insignificant to the type of intimacy we would experience as a posthuman civilization.

Any posthuman civilization worth building would welcome and respect diverse families and relationships, because at that point we would be one eternally interconnected family. We are obviously not at this hypothetical celestial state of being, but we should still build Zion now. Our primary concern with building celestial families should not be whether they are polygamous, monogamous, polyamorous, interracial, homosexual, or heterosexual, but rather that love, respect, and compassion are at the center of consenting relationships.

I am a Mormon Feminist and I support polygamy.