Your Fave is Problematic: How human bias inhibits prophetic leadership 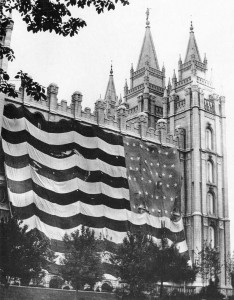 The amount of things that have been chosen for me by men I have never met is high- things like what entertainment I can partake in, how much jewelry I can wear, how I can alter my body, how I can’t kiss, or how I really shouldn’t serve a mission. There’s always some “valid” reason- ‘Well, the prophet said so, he was inspired by God’ or ‘Elder [insert name of choosing here] counseled against that, and he’s an apostle’; it is always some variation on the same theme, but it never quite adds up especially because there is 1) no scriptural basis (honestly, if anyone can find me a scripture about necking, I will personally high five you! Also, why are necking and petting always put together when they are two, very different things?) and 2) they are pretty confined to the bubble of the priesthood holders limited experiences.

What exactly do I mean by this? Lets look at the rated R example- did you know that the R rating is a category for a system used exclusively in the U.S.? If you have lived most of your life in the U.S. and you did know this then congratulations, you are smarter than me, and than Ezra Taft Benson! No, really, in a talk given in 19861 (and quoted as recently as 20132) Pres. Benson laid down the law by telling us:

Don’t see R-rated movies or vulgar videos or participate in any entertainment that is immoral, suggestive, or pornographic.

It seems inoffensive, right? I mean, it sounds right along the lines of something a prophet would say. But wouldn’t somebody inform him that the R rating system is something that a significant number of members would not identify with? And hasn’t God managed to reveal to his present day apostles that if this was a limiting thing to say in 1986, it would be even more tone deaf and telling in 2015 when the majority of members of the church live outside of the U.S.?

There are so many ways to explain this; for starters, we believe in fallible leaders. Anyone who is not Christ is a sinner and hence must take part in the blessings of the atonement, which means that leaders are allowed to make mistakes, such as being blinded and bound by the bias of their experiences. But Azul, they are speaking as the Lord’s servants, you say. I hear you, but this keeps happening over3 and over4 and over5. It’s almost as if a world outside of the U.S. and in some cases, Utah did not exist; as if God’s universal omnipotence has shrunk to a small red, white and blue sweater. You’re being unfair, you say, God can still work through them.

I would agree with you there- but have you stopped to consider that maybe the work slows down because of this inability to see how they might be biased?

Let’s look at historic change in church policy- specifically at President Kimball, and a change so big that it became canonized. In 1978 the ban that denied the fullness of the gospel to any member suspected of having ancestry of African origin (no serving as home teachers, no being sealed, and in essence no admittance to the celestial kingdom) was lifted.

Discussion on the subject has left much to be desired, with the latest controversial entry6 coming from the church itself, in the form of a new essay in which they wash their hands and Kanye shrug at the entire reason for the ban. One of my favorite perspectives (from an organizational point) into the ban comes in the form of the BYU sanctioned Spencer W. Kimball and The Priesthood essay7, by Kimball’s own son Edward L. Kimball. Kimball tells us:

¨By the twentieth century, the origin of the restriction had receded far
enough into the past that it carried the sanctity of long-established tradition.
Most Mormons felt satisfied that it had a scriptural basis, even though
the cited passages were at best ambiguous. Spencer knew that the restriction
did not come from explicit scriptures but rather from interpretations
by various Church leaders.¨

Church leaders like Brigham Young, who was not very fond of black people and who was very vocal about it, a common thing at the time he was alive(don’t believe me? Google is your friend!). This mentality of the time was one that spread to families who raised children with to think in the same way, including Mormon families who would end up raising apostles and prophets of the church; biases that God would not automatically remove with the mantle of the priesthood.

The fact that one of the worst periods in Mormon story was influenced by opinions, where ¨the gaps in logic were bridged with supposition¨ is disturbing to me. The fact that Kimball felt important the need to specify that it was supposition seems so deliberate, I mean, would we have assumed revelation otherwise? I know I would have. Supposition tells us that in this instance, there was nothing divine about it. Malicious? Maybe not in intent. But divine becomes excluded the moment revelation is left out, which leaves us, in essence, with a bunch of well meaning people who just have opinions on the matter- very human ones at that.

After President McKay and others before him had gone to God asking if the ban should be removed (it wasn’t), President Kimball decided to ask differently, stating that the biggest obstacle in the equation was himself, because he was ready to fight to keep the ban for the rest of his life. This is a telling moment- God does not force his will upon us, and that includes his prophets. The fact that President Kimball’s question changed to allow some room to admit mistake shows that God can work once we admit that maybe we are the ones in the way. For the President and those who lead the church, this is infinitely true- for if they lead the entire body of Christ’s global church but are bound and limited by the biases they do not admit to, how slow will we progress? Obviously God will not remove our prejudice- he will let us move along right with it, and sometimes plow and pummel others.

I wish I could say this was no longer a problem, but seeing how the church continues to shrink in its perspective, I worry. Recently , an article published by Deseret News explaining how the apostles are just like us, with Elder Ballard stating:

“There is something about the individual and combined wisdom of the Brethren that should provide some comfort,” Elder Ballard said. “We have experienced it all, including the consequences of different public laws and policies, disappointments, tragedies and deaths in our own families. We are not out of touch with your lives”

To say that they have experienced it all, that they are not out of touch with our lives when they cannot bring themselves to have a conversation about anything significant outside the U.S. strikes terror in my heart. How can they know what it is like to be racially profiled, to be harassed in the street, to be anything that differs from the predominant view if not a single one of them lives it? How can they claim to be all encompassing when they are victims to the same biases every human being has? Add to this the bubble of approval and nonexistent check system (and if you say God is a check then go back and read this entire thing and focus on the parts where God hasn’t changed or removed anyone’s prejudice unless they recognized it and worked along with God to remove it, go!).
This blissful ignorance has slowed our progress in the past, and will continue to slow our progress until those who lead us are brave and vulnerable enough to admit to those things that bind and blind them.

Until church headquarters stops insisting that Zion means Utah and looks at the richness and diversity of lives,  experiences and perspectives; until it acknowledges the pain and complexity of those outside of their line of sight we run the risk of wandering as a group in the desert- and no American flag will be big enough to shield us all.

6. “Race and The Priesthood” www.lds.org

8.¨Too old? Out of touch? LDS prophets and apostles engage globally to stay informed, connected and relevant.¨ Deseret News, October 2, 2014