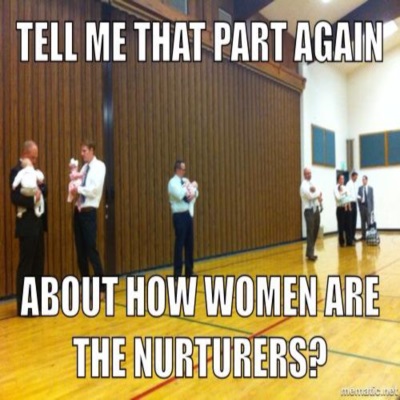 I’m tired of the image of a bumbling father who becomes easily overwhelmed when he trades places with his stay at home wife. This man who doesn’t know how to run the washer, clothe his daughters, or change a diaper is a trope.  He is a caricature that doesn’t exist.  If he is present in your reality, you are being deceived about the capabilities of men.  Men have been told that this is what men are and what fathers do.  They have been told that they are the bread winners, the presiders (whatever that means), and the occasional teacher of bike riding. They have been made to think they can hit these high points, and then they can check out.  But it is bogus and it doesn’t need to be this way.

I want to say this, and have it be put on the record once and for all: Women in general are not better nurturers, caregivers, homemakers, or parents than men in general. And it is damaging for the whole family—all families—to keep pushing the idea that they are.  The truth is that any adult human who actively engages in the joy of parenting develops the traits needed to do so.  There is no huge biological difference between men and women here; there is only difference in experience. Men who engage in parenting as much as women develop the same biological patterns in the brain that women have. But forget science, the proof that convinces me are the men in my life, who I know have as much influence as any parent.

My mother has a great and wonderful influence in my life.  But she is not the only one who has shaped me.  My dad has always been the one that taught me kindness and grace.  I’ve seen in my situations where he had every right to be angry, to lash out, or to demand something from someone that had wronged him.  And I’ve always seen him smile, act with kindness, and let the contention slide right by.  If I have any skill at this grace (and I admit that it is something I struggle with more often than I should) it is because I’ve watched my dad practice it.  My mother—who I’m sure would admit this openly—does not naturally come by this skill either.  I think we’ve both learned from my dad.  He’s not perfect, but I can count on one had the times I’ve seen him raise his voice and speak an unkind word.

My husband is the safety net for my children.  When they are babies they do tend to gravitate towards me, and that is natural—even physiological. But as they get older, it is his side of the bed they go to in the night when they wake up, it is his name (“daddy”) they call when they are hurt, and it is he that they run to when something frightens them. And I am not downplaying my influence in their lives.  The love me, they learn from me, they get much needed affection from me.  But the way they adore their daddy is not some kind of second place prize.  The way my husband and I parent and influence our children is egalitarian.  And I am tired of being assigned all the credit … and all the burden.

I was initially heartened by the appearance of the fatherhood.mormon.org website this week.  I’m glad to see the church actually focus some effort and celebration on the fatherhood role.  But then when I examined the site, I found the content hollow.  First off, much of the page is dedicated to our Heavenly Father (a stark contrast to motherhood.mormon.org, which doesn’t mention Heavenly Mother even once). The parts dedicated to fathers almost read like a list of excuses.  One of the first paragraphs can mostly be summarized as, “Your father may have worked really hard and wasn’t around much, but that’s okay because he was bringing home the bacon!”  (And of course there is no such excuse on the motherhood site.  There are no excuses for a mother who doesn’t do her job, amiright?)  The rest of the site consists of vague references about the importance of fatherhood, with a transparent effort to apply meaning to something that shouldn’t need meaning applied to it.  It has the appearance of trying too hard, so hard that you almost forget they don’t really need to try at all.

If this is the kind of thing men have to rely on when they are learning how to be fathers, it is no wonder they see themselves as non-participatory surveyors in their own families.

If we can’t stop this kind of rhetoric (which does often seem hopeless), then I have a proposal. As women, many of us read the scriptures with a preset edit in our heads.  For every he, we supplant she. For every him, we say her.  It can be a way we cope with the masculinity in the scriptures and apply them to our own spirituality.  Men should start doing this with every quote, article, or spoken address about motherhood.  If we could just pretend that what everyone really means to do is glorify parenthood and not just motherhood, maybe we could all—men and women—stop underestimating the role that fathers should play in their children’s lives.