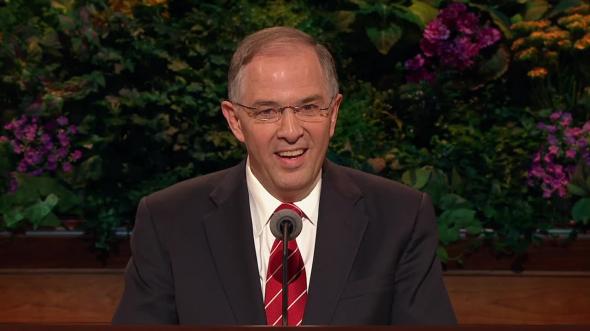 General Conference is an important semi-annual event in the lives of members of The Church of Jesus Christ of Latter-day Saints. It is a time that we hope our revered church leaders will provide us with edifying messages that will uplift and sustain us in the coming months. I went into last weekends conference really needing the nourishment that I have felt in conferences past.

I felt truly inspired by portions of the conference. I grieved with Elder Holland as he emotionally described the financial and spiritual privilege unavailable to so many in this world through no fault of their own. I marveled with Elder Uchtdorf at the light and truth we humans have come to know in the recent past and pondered with awe what discoveries, currently unfathomable, may soon be be brought forth.

Unfortunately, there were portions of the conference that were less than inspiring and, to me, were quite painful. Elder Neil L Andersen’s talk during the Saturday afternoon session was one of those times.

Why was this talk so difficult for me? Well, like many latter-day saints I have been traversing a difficult faith transition over the last year. In many ways it has been a good thing. I have emerged with much more realistic expectations of the LDS church and it’s leaders. After reading enough books to fill a small library I have begun to make peace with the fact that prophets are people just like us. Like us they make mistakes – sometimes serious mistakes. That does not mean they are not prophets. That means they are human.

Coming to grips with the humanity of latter-day prophets can be a traumatic experience for LDS church members who have grown up with an ivory tower view of those called to the highest leadership positions in the church. Quite often this realization results in the church member being thrown into what has been described as a “crisis of faith”. Discovering, for instance, that Joseph Smith was not always truthful to his wife Emma and church members, or that he sometimes used his authority as prophet to place undue influence on vulnerable people can have tragic affects ones simple faith.

Many who successfully navigate this tumultuous sea of information and remain in the church obligatorily become comfortable with the fact that prophets are less than perfect. That they, in fact, sometimes display stunning weakness.

Some find it difficult to accept the notion that modern day prophets could have made major mistakes. It is one thing to admit that Jonah sinned in his refusal to preach in Nineveh but much harder to make peace that an entire race was denied priesthood and temple ordinances due to Brigham’s racial prejudice. Millennia separate us from Jesus’ apostles dispute over who would be greatest in the kingdom of heaven, but we feel much less removed from the speech in which Joseph Smith claimed that, “I have more to boast of than ever any man had…The followers of Jesus ran away from Him; but the Latter-day Saints never ran away from me yet.” (History of the Church, Volume 6, Chapter 19, Pages 408-411)

That is why I was saddened to hear Elder Andersen describe sincere seekers who experience doubt after discovering uncomfortable truths about the prophet Joseph Smith as being misled by “half truths and subtle deceptions.” He implied that those whose doubts have led them out of the church are the worst of traitors saying that, “Studying the church through the eyes of its defectors is like interviewing Judas to understand Jesus.” What stronger message could he send to members than comparing their doubting loved ones to the man who betrayed the Savior himself?

Elder Andersen failed to address the fact that there are legitimate unexplainable events, and even identifiable serious mistakes in the prophet’s past. He implied that only two types of negative information about Joseph Smith exist – out of context and patently false. He testified that Joseph was “an honest and virtuous man.” He left no room for a more  nuanced view of of the prophet and his actions.

To Elder Andersen, having a testimony of the Prophet Joseph Smith is a simple matter. To nurture your testimony of Joseph he suggests that you, “Read the testimony of the Prophet Joseph Smith in this pamphlet, now in 158 languages….This is Joseph’s own testimony of what actually occurred. Read it often.” If your testimony still needs a boost, “Consider recording the testimony of Joseph Smith in your own voice, listening to it regularly and sharing it with friends. Listening to the prophet’s testimony in your own voice will help bring the witness you seek.” So, in order to know if Joseph Smith was God’s true prophet who restored his one truth to the earth I should assume any negative information about Joseph is false, frequently read a pamphlet provided by the church, (which contains no explanations of the issues that have led members to question) then record Joseph Smith’s testimony contained in the pamphlet in my own voice and repeat it over and over until I believe it’s true?

I find Elder Andersen’s suggestion that we can know Joseph Smith was a prophet through repeatedly reading, recording, and listening to his testimony rather disturbing. One of the unfortunate foibles of humanity is that we can be convinced that pretty much anything is true through repetition. As Joseph Goebbels, one of Hitler’s closest aids and the Minister of Propaganda in Nazi Germany stated:

If you repeat a lie often enough, it becomes truth.
If you tell a lie big enough and keep repeating it, people will eventually come to believe it.

Elder Andersen told of an experience speaking with a recently returned missionary whose friend harbored doubts about the church. “Although I hoped he could strengthen his friend, I felt concerned for his own testimony.” Elder Andersen proceeded to compare members in the church to passengers on an airplane in an emergency. Capable people, he said, should be sure to have their oxygen masks in place before assisting those who are struggling. The message – Do not engage those who doubt the prophet Joseph until you have listened to his testimony enough times that you are sufficiently convinced that he was a true prophet.

Elder Andersen, I take exception with you advising my family and friends that my pointing out Joseph Smith’s humanity should make them fear conversing with me. Why should sincere seekers of truth fear accurate information? In the January 2014 Ensign James E Talmage was quoted as saying, “The man who cannot listen to an argument which opposes his views either has a weak position or is a weak defender of it. No opinion that cannot stand discussion or criticism is worth holding. And it has been wisely said that the man who knows only half of any question is worse off than the man who knows nothing of it. He is not only one sided, but his partisanship soon turns him into an intolerant and a fanatic. In general it is true that nothing which cannot stand up under discussion and criticism is worth defending.”

Concerning obtaining true information about Joseph Smith, Elder Andersen said, “We might remind the sincere inquirer that internet information does not have a truth filter. Some information, no matter how convincing, is simply not true.” He fails to enlighten members by pointing out any controversial information that falls into this category of convincing, yet untrue information.

Elder Andersen then proceeds to tell those who doubt where to place their trust in obtaining answers to difficult questions. “…you need never doubt the testimony of God’s prophets.” We are to, apparently, assume all negative information about Joseph is false and trust that the utterances of our church leaders will always be accurate, perpetuating the myth of prophetic infallibility.

Why do we continue to put Joseph Smith on a pedestal as a “holy man, a righteous man…” when he himself denied ever being such? In fact quite to the contrary Joseph Smith said, “I don’t want you to think I am very righteous, for I am not very righteous.” (Manuscript History of the Church D-1, p. 1555-57) In Doctrine and Covenants 124:1 the Lord says, “…for unto this end have I raised you up, that I might show forth my wisdom through the weak things of the earth.”

With all due respect Elder Andersen, you are setting up many in the church membership for an epic crisis of faith when they discover that Joseph was not the infallible man you imply that he was. Joseph was a man first and, like other scriptural prophets, occasionally made serious mistakes. To quote Terryl Givens’ Letter to a Doubter, “Air brushing our prophets, past or present, is a wrenching of the scriptural record and a form of idolatry.”

If I were going to pick a hill to die on, Joseph Smith’s infallibility would not be it. You know the great thing for believing members? Your faith in the LDS church does not have to live or die on the concept of prophetic perfection! Members can revere Joseph as an inspired prophet, imperfections and all. As information becomes more available to members it is really the only way forward.

Can we not trust Joseph when he said he was “not a very righteous man”? Can we not take the Lord at his word that Joseph was one of the “weak things of the earth”?

Ponder this: If God could restore His church through a man as weak and imperfect as Joseph Smith just think what he could do with you or I?! To again quote Terryl Givens, “God specifically said he called weak vessels, so we wouldn’t place our faith in their strength or power, but in God’s.”

Elder Andersen, I plead with you to stop making statements that drive families apart with fear. Instead, help us remove unnecessary wedges between sincere truth seekers and their loved ones. As an organization that claims ultimate truth, the church needs to move beyond it’s fear of accurate historical information and shunning of those who doubt the claims of Mormonism as a result. Please, use your influence to encourage the church to be a place where families can be accepting and loving of all, regardless of ones faith or doubt.

Joseph Smith started this church in a sincere search for truth. Those who continue that search through asking hard questions are just like Joseph. Let’s make room for them in the church.

Jacob is a fifth generation Mormon who grew up in Rexburg, Idaho. He works in Minnesota as a Certified Registered Nurse Anesthetist. His ridiculously unrealistic pipe dream is to make enough money off things he creates on his 3d printer to quit his full time job and retire in style.

All posts by Jacob Ricks