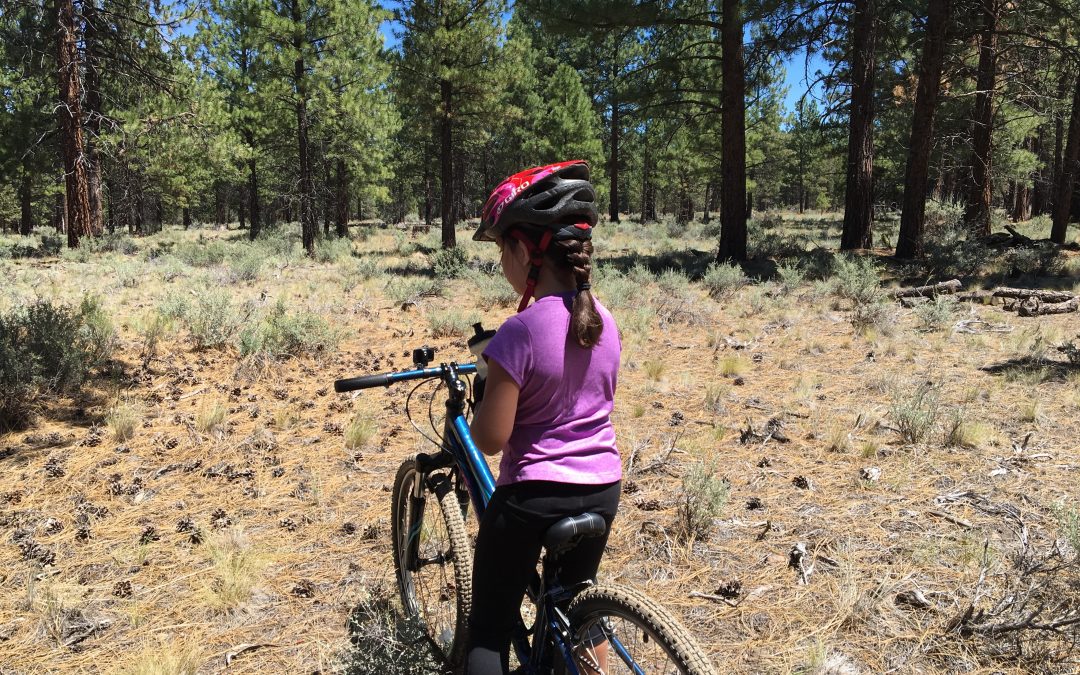 Our youngest daughter recently outgrew her hand-me-down BMX bike and wanted a new bike – a mountain bike! In order for her to get a mountain bike, she had to meet the same requirement that her older sister had to meet before she got a mountain bike: she had to ride the local BMX course two times without stopping. She was very scared but she did it! And she was filled with so much pride. I knew how much courage it took her to complete the requirement and so instead of waiting until Christmas or her birthday, we marched down that very same day to my favorite local bike shop and ordered her a new mountain bike.

Her first real ride was a few weeks later. We drove forty minutes to an easy, single-track course around a lake. She rode behind me on the course and my wife was behind her. A few minutes into the course, my daughter started screaming – completely terrified. What was going on??

She was about to crash into me.

She managed to stop right before hitting a small oak tree. She cried. We turned around and packed the bikes up. We got ice cream on the way home.

My wife later told me that our daughter was upset for two reasons: first, she was genuinely scared; second, she thought she disappointed me. She knows how much I love mountain biking. My heart broke. As I reflected on our three-minute ride, I realized I made some mistakes. The hand brakes were new for her. She knew how they worked, but they just weren’t second nature because she had been riding with coaster brakes for five years. She panicked. Also, I just took off – not terribly fast, but she tried to follow at my speed. My speed was too fast for her.

So we tried again the following week. The whole family went. This time it was a trail my wife had taken our oldest daughter on when she was first learning to mountain bike. It’s a fun trail – swooping through the trees, no hard climbs, and no drop-offs on either side. My wife and oldest daughter went first and our youngest daughter and I took the tail. If there was any little downhill, our youngest daughter stopped. If part of the trail was rocky, she stopped.

“Just pedal through the rocks and you will be fine,” I said.

But she stopped. She was scared. She started to cry.

Her sister saw that we were way behind and so she turned around. “It’s okay,” she said kindly. “It’s okay. If you want to walk this part, it’s okay.” When her sister would lovingly talk to her, she would stop crying and she would ride.

Then my wife saw that we were way behind. She also turned around. “It’s okay. Go at your own pace,” she said. I tried. I really tried. But I was losing my patience. I didn’t yell, but my daughter could tell by my tone and body language that I wasn’t happy. Why couldn’t she just do it?

At one point our youngest became nauseated. She was so scared and upset that she became nauseated. Why was I being so impatient with my daughter who is one of my two hearts? It made me sad. Where was her sister? Her mom? They were much better guides. I was going to turn mountain biking into something she did not want to do.

Many who have a family member going through a faith crisis don’t know what to do. They see something they love and want their family members to love, being rejected. And they don’t understand. They question. They plead. They lose patience. They hurt. And sometimes they make things worse.

There are others who are a little ahead in the faith-crisis journey that do understand. They still remember feeling scared and upset to the point of nausea. They are more patient. “You can do it. If you need to take a break, that’s okay,” they might say. It feels good to have those people helping us pedal through the rocks, teaching us how to use our brakes. They are better guides.

I hope I didn’t ruin mountain biking for my daughter. After I calmed down and had time to reflect, my daughter and I talked about what happened. She is happy. I asked my wife if she would take the girls mountain biking without me.

I hope my daughter loves the sport. Maybe she will leave what I so dearly love, but, as hard as it is for me to say, that would be okay. It’s her journey.