Eve and Her Own Conscience 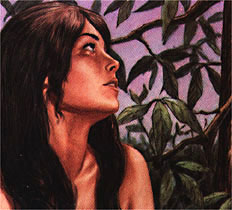 During General Conference last month, I didn’t expect anything out of the ordinary from the pulpit, but then Pres. Uchtdorf stood up.  He started a typical general conference talk touting the benefits of joining the LDS church, and then he said this:

“One might ask, “If the gospel is so wonderful, why would anyone leave?”

“Sometimes we assume it is because they have been offended or lazy or sinful. Actually, it is not that simple. In fact, there is not just one reason that applies to the variety of situations.”

I sat up.  This statement got my attention.  He went on to validate those who have struggled with their membership in the Church.  Those who have asked tough questions as they sought truth and understanding only to find confusion and disappointment.  He validated those who have made the difficult decision to walk away from their Church because they knew they had to be true to themselves.  They knew they had to leave in order to worship their God according to the dictates of their own conscience.  There are also members who choose to stay in the Church, although they find themselves at odds with certain teachings or expectations.

For a member who finds joy and fulfillment within the Church, it can be heartbreaking to watch a loved one walk away or watch them stay but struggle.  It’s easy to give someone outside our faith the respect to worship as they deem correct, but it becomes increasingly difficult to extend that same respect to members of our church. How do we respond to a member who believes in marriage equality?  How do we treat a member who seeks to agitate the Brethren for further revelation regarding female ordination?  How tolerant are we with members who approach Mormonism differently?  Pres. Uchtdorf acknowledged this but also counseled us to allow those we love to be true to themselves, to give them the space to worship according to the dictates of their own conscience.

While on earth, Jesus taught his disciples that to know God was life eternal (John 17:3).  To know God, we must seek after Him.  We must come to understand of His true nature and His characteristics.  This happens as the Holy Ghost reveals and confirms truths through our conscience.  The Prophet Joseph Smith said: “It is the first principle of the Gospel to know for a certainty the Character of God” (Teachings,345).

Why is a knowledge of God’s true nature so vital to our experience on this earth?  We know through scriptures that God placed His children here to prove us and see if we would obey all of His commandments (Abr. 3:25). In order to have faith that we are, in fact, being obedient to God’s will, we need to be able to recognize God in the commandments.

We are taught that our first parents were placed on earth in the Garden Eden where they were able to till and tend without any noxious weeds or sweat on the brow.  Things came easy to them and they lived without any worries or cares.  They were able to speak directly with God, learning of His true nature by experience.  This understanding of His true nature became vital to them later in their journey.

They were given only two commandments in the Garden.  The first was to multiply and replenish the earth and the second was to partake freely of every tree except for the tree of knowledge of good and evil.  They were given these commandments and the agency to choose for themselves.  We do not know exactly what transpired between Satan and Adam, but we know that Satan tried to beguile him into eating the forbidden fruit and Adam rejected his invitation.

Satan moved onto Eve and beguiled her.  In her book, Mother Eve, author Beverly Campbell cites Dr. Nehama Aschenasy, a Hebrew scholar, lending meaningful insight to the Hebrew word which is translated as “beguiled” in the Bible.  “It does not mean “tricked” or “deceived” as we commonly think. Rather, it is a rare verb which indicates an intense multi-level experience, evoking great emotional, psychological, and/or spiritual trauma.  She said that it is likely that this intense multi-level experience, this “beguiling” by the serpent, was the catalyst that caused Eve to ponder and evaluate what her role and purpose in the Garden really was”  (Beverly Campbell, Mother Eve).

Could it be this invitation triggered a faith crisis in Eve?  Was she faced with a moment where her beliefs seemed to be at odds and she was confronted with conflicting commandments?  Did she begin to doubt all that she had experienced with her Heavenly Father?  Did she have to figure out what truth was according to the dictates of her conscience?

When Satan confronted Adam with the fruit, Adam wouldn’t even consider eating the fruit. He was content hanging out in his Garden while waiting for further knowledge from God.  When Satan confronted Eve, perhaps she considered various possible outcomes. She studied it out in her mind.  What if she took into account God’s nature and what decision would most emulate God? —  She “saw that the tree was good for food, and that it was pleasant to the eyes, and a tree to be desired to make one wise” (Genesis 3:6).  Pres. Packer explained, “there is an obedience that comes from a knowledge of the truth that transcends any external form of control. We are not obedient because we are blind, we are obedient because we can see.”  (Ensign, May 1983, 66)  As she weighed her options and struggled to understand God’s will, were her eyes opened to see the ‘mind of Christ”? (1 Cor. 2:16)  And as her eyes were opened, did she see God in that tree and find the confidence to move forward in faith and partake?  We do know, through modern revelation, she ultimately found joy in her decision, “Were it not for our transgression we never should have had seed, and never should have known good and evil, and the joy of our redemption, and the eternal life which God giveth unto all the obedient.” (Moses 5:11)

I believe Adam and Eve’s individual responses to Satan’s invitation to eat of the fruit provide a great analogy of how we should confront our doubts and questions.  God wants us to question.  He wants us to seek after truth, to know His true nature and to become like Him.  It is no secret that the Kingdom of God progresses on this earth through humans questioning and challenging the status quo.  It is the same in our own personal faith journey.  If we are serious about our progression towards eternal life we have to accept that our faith will be challenged, perhaps even by unorthodox means.  “In life all must choose at times. Sometimes, two possibilities are good; neither is evil. Usually, however, one is of greater import than the other. When in doubt, each must choose that which concerns the good of others – the greater law – rather than that which chiefly benefits ourselves – the lesser law. The greater must be chosen whether it be law or thing. That was the choice made in Eden” (John Andreas Widtsoe, Evidences and Reconciliations, p. 194).

Each one of us must own our faith journey.  We must seek after God and worship Him according to our own conscience.  Fiona Givens said she believed “the reason why the pathway is so straight and so narrow is because we are the only ones on it. Just us and God. But there are millions of paths.”  My experiences with God are going to be different than the person next to me.  That is why it is called personal revelation.  We must allow each other the space and respect to search out God’s true nature and worship Him as we see fit.  We are all trying to do the best we can with the knowledge (or lack of), we have on this earth.  We need to let each other figure out how God works in our own lives without becoming obstructionists to one another, or worse, vilifying one another in the name of God.  Perhaps it would be wise to follow the example of our Heavenly Father in how we interact with one another’s differences and remember that “being kind is more important than being right.”

Know this, that ev’ry soul is free

To choose his life and what he’ll be;

For this eternal truth is giv’n:

That God will force no man to heav’n.

And bless with wisdom, love, and light,

In nameless ways be good and kind,

But never force the human mind.

Freedom and reason make us men;

Take these away, what are we then?

Mere animals, and just as well

The beasts may think of heav’n or hell.

May we no more our pow’rs abuse,

But ways of truth and goodness choose;

Our God is pleased when we improve

His grace and seek his perfect love.

Jamie Gilbert grew up in Colorado by way of Utah and California. She took a hiatus from college to serve a mission in the Uruguay Montevideo Mission. After graduating from BYU, she headed to Washington, DC to put her Public Health degree to good use. After spending a few years trying to do her part to save the world, she settled down and got married. She now resides in the Blugrass State and is a mother to two sweet children. She stays at home, doing her best to raise them properly, but she will completely understand if they seek counseling down the road. She currently serves in her ward's Primary Presidency, although she was demoted from first counselor to second last year.

All posts by Jamie Gilbert