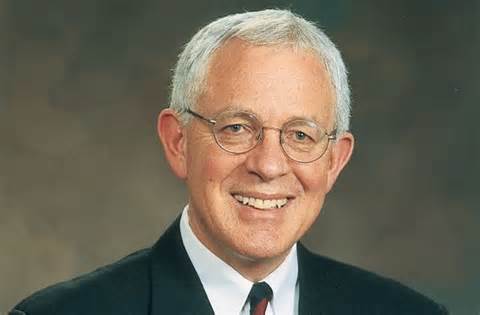 At an early morning meeting prior to the ten o’clock session of the Oakland Stake Conference on September 19th, a remarkable event occurred. Marlin K. Jensen, a general authority of the LDS Church, listened intently as members of the stake, invited specifically for the purpose, voiced the grief they had experienced as a result of their
church’s involvement in Proposition 8 as well as the broader history of programs and policies relating to gay and lesbian members.

The meeting was opened by President Dean Criddle, who in 2009 had, along with his two counselors, given moving presentations to the adults of every ward in the stake on the subject of reaching out with love and understanding to our gay brothers and sisters. (See http://www.clpearson.com/oaklandstake.htm.) In his introductory remarks, President Criddle reported that Elder Jensen had offered to get together with members of the stake whom the Stake Presidency felt might benefit from meeting in a more intimate setting with a visiting general authority. President Criddle advised Elder Jensen that many families and individuals in our stake continued to feel wounded in the aftermath of the Proposition 8 campaign and said that it would mean a great deal to many of these members to know that the general authorities are aware of their experience. President Criddle had suggested that Elder Jensen offer to listen to a few of these people tell their stories. Elder Jensen had graciously agreed.

Elder Jensen greeted us warmly, assuring us that he was there to listen, that he would share our stories and comments with the other Brethren. He urged us to be honest in our expressions, then turned the microphone over to whomever chose to speak. The rest of the hour was profoundly emotional, cathartic, and I am certain rewarding for all who were there. About 90 people attended the meeting, each at the specific invitation of a Bishop or a member of the Stake Presidency. Time allowed thirteen of these people to speak. Several expressed devotion to the Church in spite of the pain they had experienced. Some speakers expressed anger that the Proposition 8 campaign had given people “a license to hate”–expressed amazement that our church could have led a campaign that violated its own principles, a campaign in which love was not in evidence, in which Christ seemed to have been forgotten–expressed sorrow that a family who previously had managed to come together in loving inclusion of their gay brother and his husband and their child found themselves ripped apart by the Proposition 8 campaign.

For me personally the highlight of the stories shared was that of my dear friend Connell O’Donovan, who began by saying through his tears, “For many years the Mormon
Church violated my soul.” He told of his journey, so similar to that of thousands of LDS gay men and women, going through “the Lord’s program for my cure,” the fasting, the praying, the mission, the disastrous marriage, the hypnotherapy, being sent to BYU for “vomit aversion therapy”—all as he determinedly followed the counsel of his priesthood leaders. As he described the horrendous ordeal of the aversion therapy and his eventual refusal to undergo it, the emotion in the room became more audible. My friend Diana, sitting beside me, began to sob, and continued sobbing through the rest of the meeting. Many in the room were crying. As Connell concluded, he said that he felt an apology was needed to help heal the pain, help both the Church and the gay members move forward.

Elder Jensen, who had been taking notes constantly, arose and through his tears said, “Iknow that never in my life will I experience an hour quite like this one.” He said he had heard very clearly the pain that had been expressed and that “to the full extent of my capacity I say that I am sorry.” There was never a statement suggesting that Elder Jensen felt the Church’s support of Proposition 8 was an error or that he was apologizing for that event. He said, “I have heard the calls for change in our church’s policy on this subject. I have read Carol Lynn Pearson’s books and wept as I read them. I don’t think the evolution of our policies will go as far as many would like. Rather I think the evolution will be one of better understanding. I believe our concept of marriage is part of the bedrock of our doctrine and will not change. I believe our policy will continue to be that gay members of the Church must remain celibate. However, I want you to know that as a result of being with you this morning, my aversion to homophobia has grown. I know that many very good people have been deeply hurt, and I know that the Lord expects better of us.” Elder Jensen added that in his experience the general authorities of the Church are as good-hearted a group of men as could be found anywhere, perhaps not perfect, but trying hard to do what is right and that they entered the Proposition 8 campaign without malice. Every person I have talked to who was there felt they had witnessed and experienced something quite remarkable. I personally felt it to be a landmark event. Whatever the “promised land” on this subject will look like when our LDS community finally arrives there, no one can at present say. But the richly rewarding meeting

Read more about this author HERE.

All posts by Carol Lynn Pearson