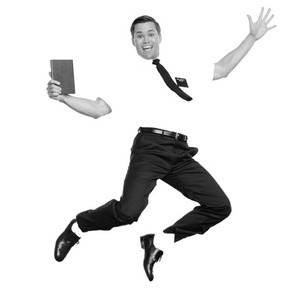 This month marks the eighteenth anniversary of my baptism into The Church. For this post, I’ll be looking back at that time period to the ever-popular conversion story that all converts have and get asked about. So, I plan to start at the beginning…

I have no recollection of a time when I did not believe in God; the existence of this Supreme Being or deity was always a given for me. In March of 1995 my maternal grandfather died. This was the first death I had ever experienced of someone so very close to me. I loved my grandfather very much (and still do!) so there was a giant hole left when he passed. After a proper grieving period I attempted to throw myself head-long in to Catholicism. Something just did not fit though—it felt very cold fish to me.

I continued to try to find the answers or comfort that I sought. In early October 1995 I was doing my homework in front of the television as I was wont to do, and a commercial for the Book of Mormon came on. They said it was Another Testament of Jesus Christ so I figured I would call the phone number and check it out. I called and ordered a copy right then. I had no clue what a Mormon was, or that the Book of Mormon had anything to do with a different religion.

In mid-October I had my appendix out and was stuck at home while I recovered. I got a call asking me whether “the missionaries” could come and deliver the book I had ordered. As any 15 year old would do, I said “Sure, why not?” inviting unknown people to my parent’s house without checking with them first. On October 30th two young men (one 19—a greenie, and one 21—an experienced missionary) came to my house with a copy of the Book of Mormon. They asked if I would hear the discussions. Since I was hungry for spiritual nourishment I said yes and so we delved right into the 1st discussion that night. My brain exploded. Unbeknownst to me, some of these things (while different from what I formally believed) were what I had believed all along. We talked about a lot of things that night and I made an appointment for the second discussion and promised to read Moroni 10:3-5 and pray about it.

Two or three days later (it was a long time ago) they came back for the 2nd discussion. Again it was all great stuff. At the end of the discussion, the younger missionary asked me if I would consider being baptized. When I said yes, I thought he was going to choke. His face was so surprised and he had seemed so hesitant to ask the question, but I knew it was the right thing for me. They came one more time before that Sunday and they asked me to come to Church (ironically this was the harder part for me than choosing to be baptized), but I said I would. They arranged with the YW President and her family to pick me up.

Church was different and weird and I genuflected when I came in to the chapel (a habit I would not break for another six months) but overall, despite not knowing anyone I felt that this was my home. Two Sundays later, after Church I was baptized and confirmed. My parents and two of my sisters were in attendance. I was grateful that my parents allowed me to take that step. That they trusted me enough to know my heart, mind, and faith and where it was leading me. They could have made me wait three more years until I was 18, but they didn’t and I consider myself lucky for it. So, that is the story of how I joined The Church. The rest is a nuanced history of activity and inactivity, love and loss, faith and doubt.