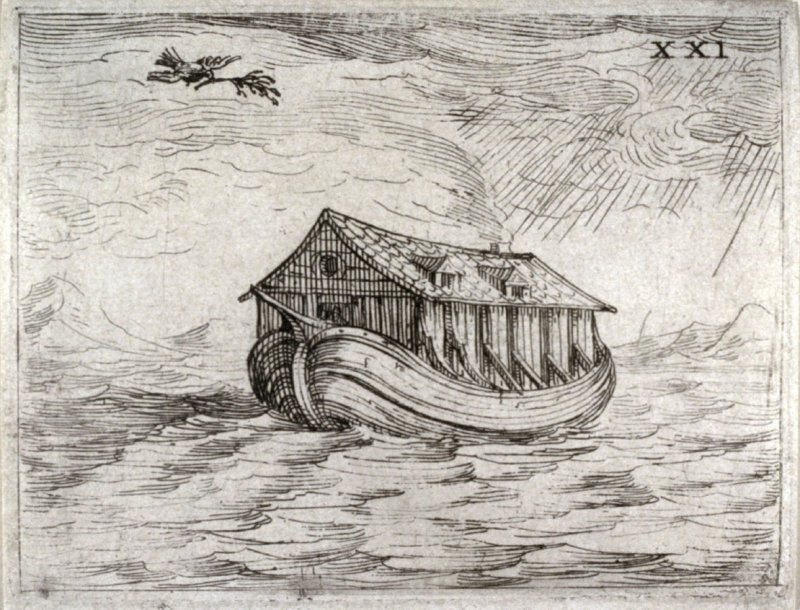 As a young child I had a Fisher Price Noah’s Ark Toy. It had a plastic boat and figurines of Brother and Sister Noah. There were pairs of zebras, tigers, giraffes, elephants and camels. The male animals were big and masculine looking and the females had lipstick or a bow on them. Looking under their tails revealed no gender specific characteristics.

I would play with the set in the bathtub. Turning on the water would cause a panic and Noah and I would throw all the animals into the ark to save them from destruction in the Great Flood. With Noah and the animals safely into the boat, I would relax (and get my gender specific parts washed).

The Story of Noah and the Great Flood is a simple Bible story that nearly everyone knows. It also gives Mormons a clear connection to traditional Christianity. The children’s version has drama, cute fury animals and faith all mixed in with lots of really bad guys who die in unseen ways.

The LDS Church has embraced the Noah’s Ark Story fully. The LDS Bible Dictionary says, “During Noah’s time the Earth was completely covered with water.” and as recently as 2011 President Thomas S. Monson referred to the “days of Noah, when the Lord cleansed the earth by flood.” The Church is also dependent on the Ark journey to explain how humanity got from Jackson County, Missouri (where Mormon’s believe the Garden of Eden to have been) to the Middle East. In dozens of General Conference talks I’ve read, not one refers to any part of the Noah story as myth or symbolism..

While watching the 2014 movie Noah with Russell Crowe, I watched with horror as all those “wicked” babies and children were killed by the rising waters. The idea that only Noah’s family was worth saving is troubling. Didn’t most people just have a few goats or sheep and gathered food in the hills to survive? This wasn’t Las Vegas or Rio de Janeiro at Carnival. Was there reason for God to justify a mass genocide?

All of this becomes even more difficult when you consider the teaching that Jesus Christ is the God of the Old Testament. The Deseret Book paintings of a Way-too-White Jesus holding little children doesn’t quite match the vision of a vindictive, heartless God that drowns babies.

The story of the Flood has continued to unravel as I’ve looked into the science of it. Where did enough water come from to cover the Earth as high as Mt. Everest? How was Noah able to collect a million species of insects? Did he have private cages for each beetle pair for their honeymoon cruise? Did no animals die on the ark? Who cut down the 150 acres of forest needed to build a vessel that large? How do you supply 20 pounds of fresh meat daily to the grizzlies, polar bears, lions, tigers and cheetahs? How big were the storage tanks to hold fresh drinking water for the herd?

Even a mix of fresh and salty water would kill every fish, all but a very few plants and every other sea creature like, whales, urchins, clams, crabs etc. And the geologic record of a catastrophic global flood would be distinct: a massive, worldwide layer of sediment mixed with billions of fossilized plants and animals.. God himself said, “and every living substance that I have made will I destroy from off the face of the earth.” Where are the fossils?

In spite of all this contrary evidence, the church does not, or cannot back away from the Global Immerse-the-Earth Flood Story. An Ensign article in 1998 said, “Latter-day Saints believe that Noah was an actual man, a prophet of God, who …. gathered his family and a host of animals onto the ark, and floated safely away as waters covered the entire earth.”That statement does not leave a lot of wiggle room.

The flood story appears in many cultures, and I think that each version of the myth can be taught in a way that encourages valuable lessons about obedience, hard work, repentance and family. It is concerning, however, when the Church leadership, comprised of many that are educated and successful, cannot let go of global flood as historical event.

In recent years the LDS Church has been willing to back away from statements made by many of the prophets. In the recent essay on race, Brigham Young was thrown (somewhat) under the bus for denying temple ordinances to African Americans. Statements in the Book of Mormon claiming that the Lamanites are the PRINCIPAL ancestors of the American Indians have been removed. We no longer teach that Catholics are the Great and Abominable Church. And it isn’t even taught anymore that we will all get our own planet someday. (This last one is a bit disappointing. I had plans to make brussels sprouts taste like candy corn in my world.)

Stubbornly, and even to their detriment, the LDS Church still officially clings to polygamy, the Tower of Babel, Kolob and The Three Nephites while teaching that a love-one-another God would drown millions of children (including Noah’s grandkids), pregnant mothers, puppy dogs and panda bears.