Over the past two to three years, I have come to respect Thomas more and more not as Doubting Thomas, but as Thomas the Believer. Let’s look at the story:

24 ¶But Thomas, one of the twelve, called Didymus, was not with them when Jesus came.

26 ¶And after eight days again his disciples were within, and Thomas with them: then came Jesus, the doors being shut, and stood in the midst, and said, Peace be unto you.

27 Then saith he to Thomas, Reach hither thy finger, and behold my hands; and reach hither thy hand, and athrust it into my side: and be not bfaithless, but cbelieving.

28 And Thomas answered and said unto him, My Lord and my God.

29 Jesus saith unto him, Thomas, because thou hast aseen me, thou hast believed: bblessed are they that have not seen, and yet have cbelieved.

This can very well be each and every one of us. Not only does he say he can’t believe, but that he will not believe. Big difference there. He refuses the testimony of others and seeks for himself his own testimony and witness.

A few years ago, my wife and I went to the Carl Bloch exhibit at the Museum of Art at BYU. Among the collection was Bloch’s “Doubting Thomas.” It moved me nearly to tears. I saw myself as Thomas the Doubter. I had not lost my faith in Christ, but there were questions in my mind; questions about the Church, the leaders and many other things. Hardly anybody knew about my struggle. Nearly anybody who has gone through some sort of questioning within the Church feels something along the lines of “If I doubt or question, I’m apostate or on my way out.” I slowly came to realize certian things: the world is not black and white; the Lord usually works through familiar avenues; and most importantly: God is Love. I also came to appreciate and understand that questions and doubts are good. Questions are what started the church. They are what power the wheels of revelation. They are to be encouraged, not looked down on.

As these dots connected more and more, I went back to Bloch’s “Doubting Thomas.” I realized something: it’s not of Doubting Thomas. This was Thomas the Believer. He has gained his testimony of Christ. In his crouch, one that seems to say that he is not worthy of Christ, one in which I have imagined myself so many times, he is no longer doubting but is “answering and (saying), ‘My Lord and my God!'” This is moment that so many of us have, after we pray and study and search and dig and wrestle and sweat and ponder and yell and cry and everything else we can do, we have our testimony. This is Thomas’ moment of conversion. He has seen it and believes it. 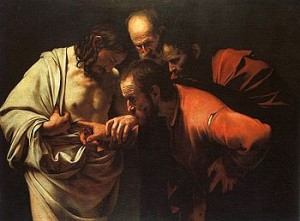 The Incredulity of Saint Thomas by Caravaggio

Compare Bloch’s painting to Caravaggio’s “The Incredulity of Saint Thomas.” This is Thomas the Doubter; this is the Thomas that everyone remembers. But let’s focus on Christ in this particular painting. That is why I love this “The Incredulity:” not for what Thomas is doing, but for what Christ is doing. He pulls back his robe, grabs Thomas’ hand and thrusts it into his side. He wants Thomas to know for himself, without a doubt, that this crazy, remarkable, impossible, amazing and truly unbelievable thing is true. Christ has risen! What more of an impossibility can there be? But Christ stands there and beacons Thomas to know of Him.

This blog is all about faith. I love the series that Kylan Rice and Bishop Wallace put out about it. It’s a wrestle, it’s not easy and it never was made to be easy. Dan Gable, an Olympic Gold Medalist in wrestling (wrestling trivia – he won Olympic Gold in 1972 without giving up a single point) said “Once you’ve wrestled, everything else in life is easy.” In this sense, I can see it being 100% true. For many people, this wrestle that they have with God is one of the hardest things they will ever do in their lives.

Many people fault Thomas for not believing without seeing. They cite the Lord saying “because thou hast seen me, thou hast believed: blessed are they that have not seen, and yet have believed.” Let us remember, however, that “To some it is given by the Holy Ghost to know that Jesus Christ is the Son of God, and that he was crucified for the sins of the world.” This is not a gift given to all; to some it is not given at all, even though that is their desire and they spend extreme amounts of energy and time trying to gain a knowledge for themselves.

I feel that belief and disbelief both deserve respect. John Dehlin

Everyone is in their own place in their faith journey, and who are we to judge them for that or expect more from them? I love what John Dehlin posted in response to something on FaceBook. He said “I feel that belief and disbelief both deserve respect. Referring to someone’s belief in God as an “imaginary friend” is rude on any level….just as it is to imply that an ex-Mormon just wanted to sin.”  It doesn’t matter where you are on your journey, or how far into the wrestling match you are; keep going. Figure things out. Pray. Beg. Probe. Dig. Wrestle. Yell. Cry. For those who have not gone through a wrestle with your faith, it’s not up to us to judge those who have. It is up to us to help, lift, encourage and do what we may to help those around us.

To those going through a faith struggle, remember it is only given to some to know that Christ is the Son of God. To others, it is a wrestle.