Does my church support a hate group? 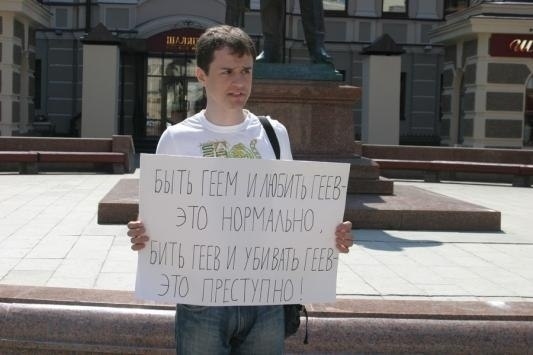 Being gay and loving gays is normal. Beating gays and killing gays is a crime!

So says the sign held by the man, Dmitry Isakov, in this image. You can’t see it in the picture, but approximately 1,000 miles away there’s a guy who read an article about Dmitry’s sign and called the cops, leading to a conviction and a fine[1]. You see, in Russia a statement like Dmitry’s counts as LGBT propaganda.

And it’s not all that counts as LGBT propaganda. Using the same law, Russia has cracked down on the founder of an online support group for LGBT teens and newspaper editor who published an interview with an openly gay schoolteacher. The contents of the interview?

In the interview, the teacher — who was told his school contract would not be renewed after he came out publicly as gay — defended LGBT rights.[2]

Something remarkably similar to these last three words were used, I believe, to describe a certain press conference earlier this year held in the Church Office Building. But I digress.

So what does this absurd Russian anti-LGBT law have to do with this blog post? Well, first of all, LGBT youth suicide is a significant and urgent crisis across the world[3] and in Utah[4]. This is a problem that can be fought against as people stand up for their brothers and sisters and help them feel loved.

But unfortunately this isn’t a blog post about how my LGBT brothers and sisters feel loved.

This is a blog post about the opposite of that.

The World Congress of Families

This year the World Congress of Families is, for the first time ever, holding their annual meeting in the United States. In fact, at the invitation of the Sutherland Institute (a conservative Utah-based advocacy group), this meeting will be held in Salt Lake City, Utah and will feature a keynote address by Elder M. Russell Ballard. The WCF has ruffled not a few feathers across the country and the state. Most vocally, the Human Rights Campaign and WCF got into a little report tussle earlier this year, with HRC leveling accusations of anti-LGBT bigotry, and WCF defending their name with aplomb.[5]

But one of the biggest points of contention surrounding the WCF’s planned presence in Utah originates from the Southern Poverty Law Center, which works to fight discrimination by identifying groups that, in their words, “have beliefs or practices that attack or malign an entire class of people, typically for their immutable characteristics.” If a group is guilty of such attacking or maligning, the SPLC adds them to a running list of hate groups. Fortunately for those cartographically inclined, their list also comes in map form:

As you can see (click here for a larger map), many on the SPLC’s hate group list are Nazi and KKK groups. The Westboro Baptist Church makes an appearance on the list for their stridently anti-LGBT hatemongering, which I’m told is the universally accurate term for things like this, this, and this (apparently they also picketed President Hinckley’s funeral).

But membership on this list isn’t handed out to just anyone the Southern Poverty Law Center disagrees with. When it comes to LGBT-related groups, for example, it’s not enough to merely oppose marriage equality or block anti-discrimination legislation. On the contrary, a group gains status as an official anti-LGBT hate group according to the SPLC due to

“. . .propagation of known falsehoods – claims about LGBT people that have been thoroughly discredited by scientific authorities – and repeated, groundless name-calling.” By “known falsehoods,” we mean such things as asserting that gays and lesbians are more disposed to molesting children than heterosexuals – which the overwhelming weight of credible scientific research has determined is patently untrue. Nowhere in our report do we equate taking a position against same-sex marriage with hate speech. [6] (emphasis added)

So, according to the Southern Poverty Law Center, the World Congress of Families is a hate group. Well, what proof do we have of this? If you’ve already read my footnotes you’ll know that the Human Rights Committee put out a detailed report outlining WCF’s bigotry, and the WCF put out their own detailed report as a rebuttal. I guess we’ll never know, sounds like a classic he hates she hates amirite?

Actually, no. The SPLC has determined, upon careful research, that the WCF propagates known falsehoods about my LGBT brothers and sisters. Falsehoods like these that are harmful to actual people who belong to existing families across the country and in Utah. These untruths cause and magnify the ostracizing effects of not fitting in with the community (the academic word for this is “minority stress”[7]). As an example, if you want to read a masterfully written heartfelt account written by an openly gay teen in Salt Lake City, here’s a hook:

A typical day is filled with a million subtle, mostly unintentional digs at a piece of who I am.

These falsehoods are also having an effect in Russia, where the government’s anti- “LGBT propaganda” laws are bravely opposing support groups and posters.

The thing is, the WCF apparently loves this kind of stuff. Larry Jacobs, managing director at WCF and leader at the affiliated Howard Center for Family, Religion, and Society[8], called Russia’s anti-gay laws “a great idea.” The WCF even “signed a letter of support for the Russian law, decrying opposition to it.”[9]

The World Congress of Families, from everything I can find, is full of good people trying to do what’s right. These are not Westboro Baptist Church goers we’re talking about here. But, that doesn’t mean that the LDS Church’s involvement with a known hate group won’t be harmful. LGBT leader and documentary filmmaker Kendall Wilcox posted this on his Facebook wall when news of the keynote speech broke:

Although there are positive ways the WCF seeks to support families there are also some very troubling aspects of the Congress. Elder Ballard’s role as a keynote speaker implies LDS Church approval of all the WCF activities.

And before you disagree with Mr. Wilcox’s last claim—that Elder Ballard’s role implies LDS Church approval—put the shoe on the other foot for a moment. Imagine Elder Bednar giving the keynote address at PETA’s annual meeting, or Sister Wixom headlining a Code Pink conference. Wouldn’t happen, would it. 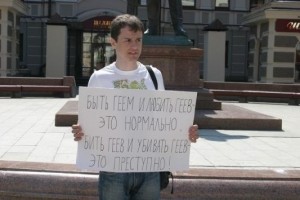 But all of this really hits home to me when I think of Dmitry Isakov and his illegal LGBT propaganda sign. It might seem to him that the entire country of Russia is against him. It might seem to him that the world thinks he is a dirty sinner, and that he’s part of some vast “gay agenda” that is hellbent on destroying the foundation of civilization.

Groups like the World Congress of Families are doing absolutely nothing to disabuse him of that notion.

My Church’s clear support of this organization seems to suggest that it doesn’t care to, either.

[1] http://queerussia.info/2013/12/20/3251/#sthash.6ioe1udc.dpbs. The Human Rights Watch hits the nail on the head: “The court has ruled that Isakov’s message of tolerance is illegal under Russian law. He found that deeply shocking. So should the rest of the world.”

[3] Suicide among LGBT youth is a problem: http://www.sprc.org/sites/sprc.org/files/library/SPRC_LGBT_Youth.pdf and https://www.ncbi.nlm.nih.gov/pmc/articles/PMC2072932/

I’ve looked over both of these detailed reports and I’ll be absolutely honest—I think HRC made some very compelling points about WCF’s bigotry, but maybe not as many points as they thought they did. Read the reports for yourself.

[6] I was disappointed to see that much of the Utah coverage of the SPLC’s designation of WCF as a hate group misreported this fact, saying instead things such as, “The Southern Poverty Law Center has put it on a list of “hate groups” because of its anti-LGBT views” (FOX13) and “The World Congress of Families is on the Southern Poverty Law Center’s list of “hate groups” for what the center says are anti-LGBT views” Deseret News. You can be pretty anti-LGBT and not be on that list. It’s not that long.

[7] The scholarly term “minority stress” is the designation for something we can probably intuit already: “stigma, prejudice, and discrimination create a hostile and stressful social environment that causes mental health problems. The model describes stress processes, including the experience of prejudice events, expectations of rejection, hiding and concealing, internalized homophobia, and ameliorative coping processes.” Or, in other words, when you feel like you’re alone and everyone hates a significant part of you, life sucks.

[8] Elder Oaks is an honorary member of the Howard Center’s board of directors.

[9] Larry Jacobs makes it clear in this radio interview that liberals are actively trying to destroy the family: “Obviously there are some at high levels that are quite aware of the strategy, but even those that aren’t are implicitly participating in this strategy because everything that the far-left promotes from homosexual marriage to radical environmentalism to a socialist/communist approach to big government, all of these things require the breakdown of the family. …. it’s not that they’re stupid and don’t understand what the family stands for, that’s the very reason that they’re against the family because it radically opposes their leftist agenda.”